Earlier in November we tried our first game of Strength and Honour (details here) and the verdict was very positive.  Because it was our 1st game it all took a while to get going and we didn't get too far into it, so we had another attempt this week with slightly reduced forces and less faffing about as we were a bit more familiar with the rules.... 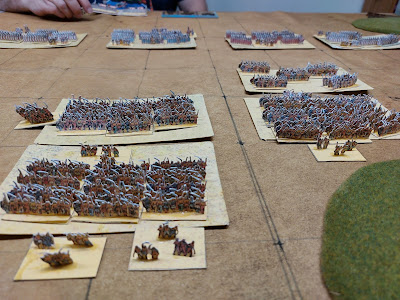 This time the Romans were facing off against some Germanic tribes (I've just finished watching 'Barbarians' on Netflix... recommended!).  We quickly worked through the set up and deployment and found that the vast German forests had disappeared, leaving a largely open battlefield with only a marsh and a couple of hills to break it up. 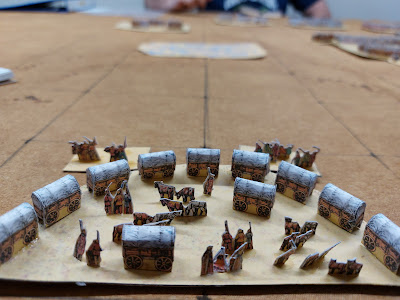 As we had fewer units this time deployment was a bit easier, especially for the Romans.  As units deploy off of the previously deployed one it can be easy to get in a bit of a muddle... the marsh hindered my German Warbands but as they can be supported from the rear I was able to add in the last of my Warbands at the back.  The Romans dont get this rear support bonus so needed to think more carefully about where to go (but there were fewer of them so not such a challenge).

I'm still not sure I've fully grasped the rules on deploying skirmishers... these can be deployed as a unit or attached to other formed troops.  We think we needed to deploy the skirmishers on table 1st and then allocate them so this meant they could only be attached to the rear units but we may have got this wrong and I need to re-read the rules on this 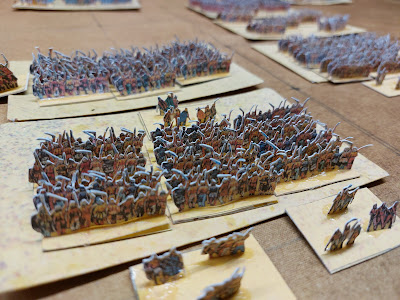 The rules reward what feel like appropriate tactics... charging enthusiastically for the Warbands and a steady controlled advance for the Romans.  I decided there was nothing to be gained by hanging back so my Germanic hordes headed straight for the Roman lines.

The Romans were a bit more cautious, trying keep their lines intact and both sides had units forced back and began to gather Setback cards.  The Romans had a single cavalry unit and I really ought to have paid more attention to it as it successfully wheeled and charged onto the flank of kne of the warbands, driving it back across the rear of the German lines.

The tussling continued on both sides and we did eventually run out of time again but much closer to a conclusion.  Based purely on Setback cards the Germans were slightly ahead but my warbands were now lacking their rear support and were pinned down by the Legions.  It seems you can only initiate an attack if you can equal your opponents combat factor (so no possibility of a brave but doomed charge) and the Romans were in a very strong position and unless I was very lucky would have been able to crush the warbands if we'd played on a for another turn or 2.

Very impressed with these rules... I'll need to add some more Romans as it would be good to see how a Civil War game plays out.