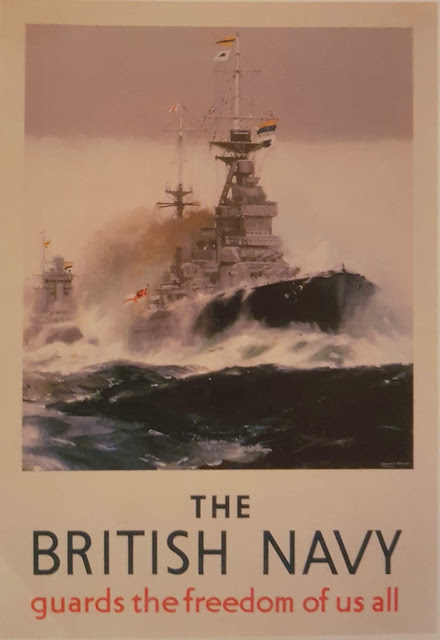 I still have to complete a couple of boats kindly donated by Eric the Shed and a couple of PT boats that came with the next issue of WI but I certainly have more than enough to get started.

I decided not to go for any fancy camouflage schemes which meant digging out a variety of grey paints.  The starter set has a basic painting guide and there was lots of inspiration on some of the Cruel Seas Facebook groups that have sprung up.


After a rummage in my paint box I realised I would need to get more grey paint which meant a trip to the local Games Workshop and trying to decipher the names of their paints and work out a comparison to the similar shades in Vallejo.  Luckily I was spared the usual " and what are you painting?" conversation.

So here are the MTBs and S Boats so far.  They still need flags adding and possible a wash but I'm still in 2 minds about this.  Now I need to get cracking on the launched torpedoes. 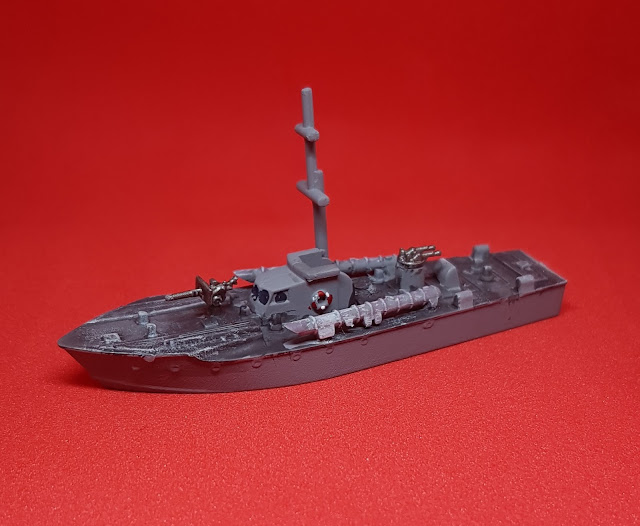 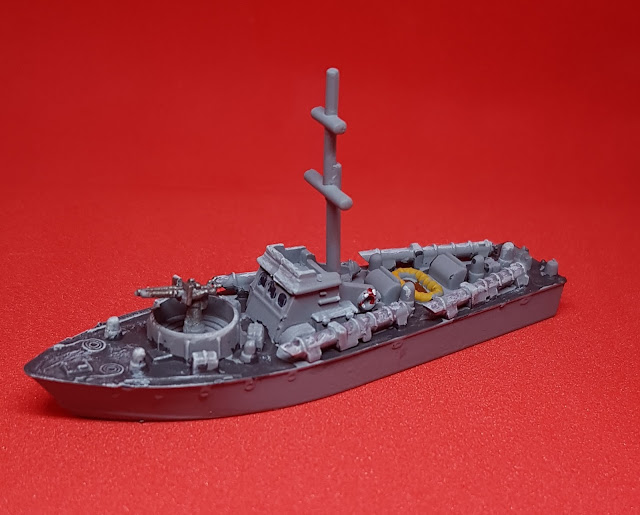 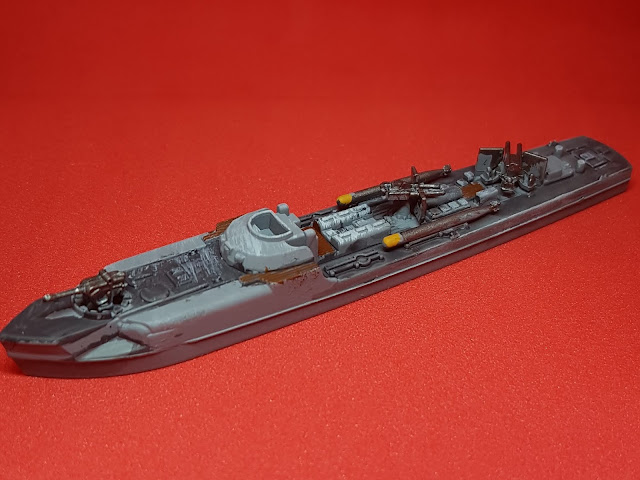 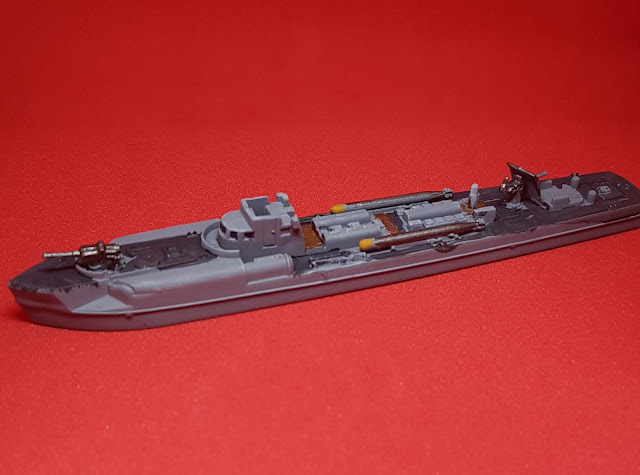 
It seems half the world has recently bought into Cruel Seas, the new coastal boat game from Warlord Games.

I've always been a fan of this setting and already have a few boats in 1:600 and lots in 1:1200 (bit too small).  My rule set of choice has been the excellent Action Stations by David Manley.

So when the news broke about CS I was a bit torn...these are in 1:300 which is an unusual choice for this type of game.  Warlord have made a similar move with Blood Red Skies; the standard scale for air games is 1:300 So they went with 1:200.  It seems like a bit of a marketing gamble but I guess if it works then everyone buys into your products.

No sooner had the starter sets begun landing on formats than the debate on the rules started.  The general consensus seems to be that they were a bit rushed and would maybe have benefited from more proof-reading and play-testing.  This was quickly followed by a number of errata released by Warlord.  Critics complained that the 11 pages of corrections and clarifications suggested problems ahead but actually it isn't as bad as all that.  Some of these are clarifications rather than wholesale changes and a lot relate to scenarios rather than core rules.  The house style with lots of illustration and space on the page has also pushed the number of pages up.  If they had simply listed bullet points of corrections it would probably only have been a page or 2.

Having said that, the rules are a bit unclear in some places (especially around turning for example) and there are a few rules that simply don't make sense.  An example of this is the use of splash markers which in the rules can aid with targeting but which, in reality, would have the opposite effect and would make it harder to coordinate fire.

The box comes with a 108 page rule/resource book and models for 6 MTBs and 4 E Boats.  The models are very nice indeed and I can now see the attraction of the larger scale.


Each boat type has a data card with info about weapons, speed etc.  These are a bit small, especially when trying to clarify for example the calibre of a particular gun.  There are sliding paper markers to fix onto these cards which are used to denote hits but by all accounts these are a bit flimsy and a lot of people seem to laminate the cards and the using a marker or something else to denote hits.


Rather than keeping track of knots and speed, each boat has a wake maker which shows the speed band the boat is moving at.

Activation is done by drawing a dice from a cup which makes the action even more chaotic...a good thing for this type of combat and ideal for multiplayer games.

The actual rules (with the caveats I mentioned earlier) look pretty straightforward...not overly complex but very playable so ideal for a fun evening game and I'm pretty pleased with the overall set and love the models.

I haven't actually played a game yet but hope to.remedy this later next week.  David Manley has produced an excellent set of house rules on his blog which I suspect I will be adopting from the start...they can be found HERE

I'll post some photos of the completed boats soon and a write of game #1 when I get a chance. 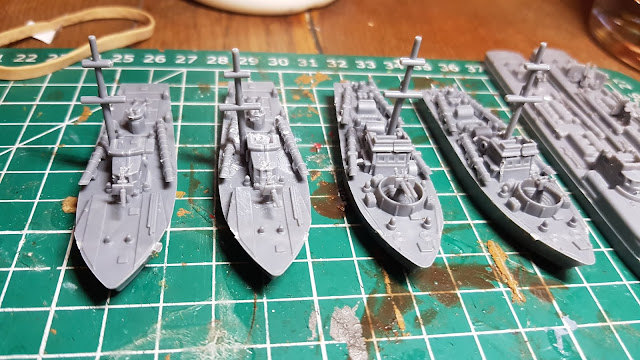 This year I will be mostly....

So we're already 10 days into 2019 and I'm already lagging behind in my New Year resolution to get a 2019 plan posted.  Pesky real life has gotten in the way as usual although I did manage to squeeze in a couple of boardgames in the last few days. 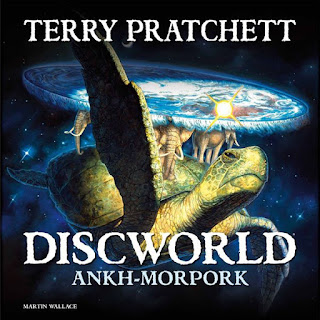 Game #1 was a family game of Discworld Ankh Morpork...an excellent game with a lovely mapboard.  Each player has a secret objective (control x number of areas of the city, have x amount of coins etc) depending on which secret character they are.  As usual my wife claimed she has no skill at boardgames before steadily clawing her way to a winning position!  Incidentally thus game is listed at really stupid amounts of money on eBay and BoardGameGeek..  BGG Link 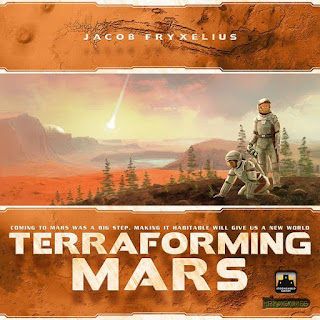 Game #2 was a game of Terraforming Mars.  I'd heard of this but was only very vaguely aware if the format and had no idea how it all worked.  It can often take me a few games before the mechanics of some boardgames sink in but this was really intuitive and easy to pick up (to be fair we were playing the introductory game).  Each player represents a corporation attempting to (no big surprise here) Terraform Mars with players using resources to buy cards, increase production and ultimately raise the temperature and oxygen levels.  Great game...definitely looking forward to more plays of this.

I usually avoid planning but I have a few ideas so thought it might be an idea to commit myself.  Most of my projects are tidying up existing things I have previously bought.

First up is Cruel Seas, the coastal forces game from Warlord that all the cool kids are playing.  My starter set arrived at Xmas and I'll post a review soon.  I've actually already painted the boats and have a few extras courtesy of Wargames Illustrated, so I can almost count this as done although of course I'll need some extra boats...definitely a merchant boat to torpedo... so maybe it's more 'in progress'.

I also bought the Blood Red Skies starter set but haven't touched this yet so I'll need to get the planes painted and (again) add a few extras.

I almost painted my 1:600 ACW Ironclads before Xmas but was then distracted by other things.  These have all languished for a couple of years so really need some TLC this year.

My Cowboy project has figures but I need to do some more work on buildings and terrain.  I have a few buildings but need to get on with construction.

My final tidy-up project is to make up the Jacobite forces for my paper soldier armies.  I have a decent number of Government  troops so they need some opposition.

I'm not really planning any news projects although I do have an idea in the back of my mind for 28mm Far East WW2... Japanese and Chindits.  It may come to nothing but it can always join the great list of unfinished plans!

Last year I was mostly...

I promised the traditional pre/post Hogmanay review of the year and before 2019 gets too old here we go...

This year I managed 41 post, 3 fewer than last year but still a respectable number.  A few new followers have tagged along (thank you very much!!) and my post views have been modest but, again, respectable.  Building a global audience was never really the plan so I'm happy with modest.  Like last year posts about boardgames always seem to attract a lot of views, and these, along with posts on 54mm gaming have definitely been the highest (apart from Salute which is always a popular topic)

So Spring saw a lot of work on my 54mm North West Frontier figures which finally saw several games at Eric the Shed's and at Guildford.  They also had an outing at the excellent Little Wars Revisited 54mm Games day in Woking.  There is another of these being planned for 2019...details can be found here

After Salute I discovered the brilliant 'Battle for Britain' series of books by Peter Dennis which allow you to print and cut out paper soldiers from a range of periods.  I produced loads of Government soldiers for the Jacobite period but haven't started on the Jacobites themselves although I printed out a couple of sheets yesterday so this can be a project for dark winter days.

A lot of my gaming is at Eric the Shed's and a project amongst that group has been a VBCW campaign.  This prompted the painting up of a contingent of miners and football players as well as some regulars who took part in a few games at the shed.  I'm lucky enough to get regular games with Eric's great collection of armies so there has been a lot of Black Powder and Pike and Shotte as well.

I managed to complete a load of Test of Honour Samurai figures and these were fielded at my other regular gaming spot with my friend Andrew.  I've largely neglected the Guildford club this year, apart from an uncompleted Chain of Command campaign and a game of Blood Red Skies: this is mainly down to the practicalities of getting there on time and bagging a table.  Circumstances at home meant this wasn't so easy to do, but I am determined to make a better effort to get along there on some Mondays in 2019.

Boardgames have also figured large this year with a lot of games at Eric's (especially Zombicide) and Battle of Britain which arrived after a prolonged Kickstarter wait.

Looking back it's been a really busy year, gaming-wise.  I've impressed myself with actually completing (I say 'completing'....nothing's ever 'complete!!) a number of projects and being a lot more focused than usual.  Will it last in 2019?? My next post will be a Planning for 2019 extravaganza!
Posted by alastair at 21:05 1 comment: