One of the drawbacks of the Osprey range of wargames rules is that they are very affordable and therefore very tempting.  A little while  ago I bought copies of Black Ops and En Garde but haven't had a chance to try them out.

Last week I was arranging a game at the club and decided this was a good chance to try out Black Ops as I knew my opponent, Andrew, had previously enjoyed other modern era games such as Force on Force.

The rules themselves are split into 2 formats: the main straightforward game
and one that is more focused on stealth missions.  The inspiration for the rules is clearly very cinematic...indeed the blurb on the cover cites Bond and Bourne films and games such as Splinter Cell and Metal Gear Solid are an obvious inspiration too. Suggested factions in the rules include regular troops and fanatics/militia but also include ideas for police, criminal gangs, intelligence agencies and even Ninjas.  There are also suggested stats for near-future tech if you want to try out Jump Packs and Stealth Suits


Troops are divided into a number of categories: Aces (leaders), Heavies (not necessarily people with heavy weapons but weapons specialists...marksmen, RPGs etc), Specialists (with non-weapon skills...medics, scientists etc) and Soldiers.  Points are paid for different quality troops and additional weapons, skills etc.  Figures are activated on the turn of a playing card using face cards and Jokers: so, for example if a Red Jack is turned then all 'Soldiers' on the Red side are activated.  Each figure then gets 1 action.

Figures can deploy on Blinds until spotted but I' decided we may as well go for it and use the Stealth rules as well.  These mean that some of  the defenders are deployed on blinds while the others are patrolling as guards.  The attackers deploy normally and can either sneak past the guards avoiding raising the alarm or go in all guns blazing.  At this stage on the attackers use the cards to activate.  As  the attackers move and fire they generate noise which alerts the guards...they don't necessarily raise the alarm but will investigate (or in my case, wander around aimlessly and ignore the heavily armed troops invading their compound!).  Eventually they should be bright enough to twig something's up and raise the alarm  at which point it reverts to the normal game format.

The rules suggest a range of scenarios  and settings including Assassination, Extraction, Espionage, Sabotage, Raid and Surveillance. Suggested settings include Airfields, Compounds, a Defile, City, Factory and Village.  Our game set small force of Special Forces troops against some generic Fanatics.  in a village with the aim of killing the Leader.  In the centre of the village was a large oil well and some storage tanks which could well make a reappearance in a later Sabotage scenario.
The Playing cards tucked under some buildings mark the possible locations of the leader and off-table guards who are all assumed to be asleep or otherwise occupied 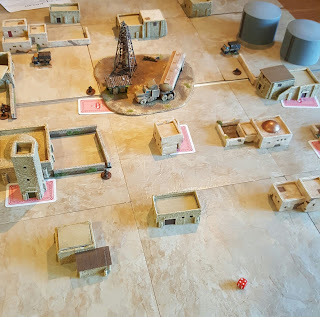 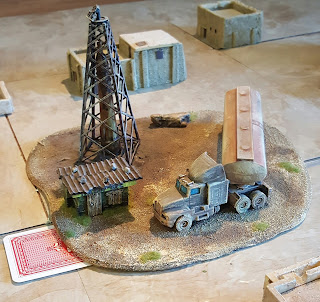 Andrew was doing an excellent job of sneaking around and my guards were proving particularly rubbish at investigating noises but as I suspected, Andrew's impatience got the better of him and he quickly grew tired of sneaking and decided to go for the less subtle approach of killing everyone which would at least ensure the Leader was among the casualties﻿ 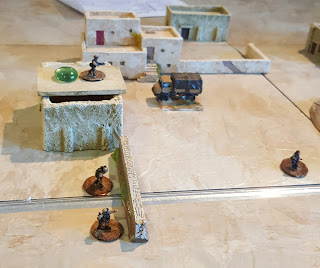 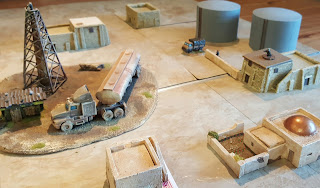 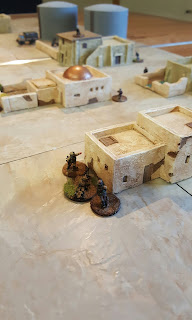 The fanatics only managed to kill one of the Special Forces (well...they are 'Special') and we found the rushing your opponent and hitting him seemed a very effective way of taking out the opposition, especially if you can outnumber him.  This worked well for Andrew but backfired somewhat when his troops were tied up punching Fanatics, leaving my Leader to abandon his followers and make his way to the truck by the storage tanks and drive off.

A hail of gunfire from the Special Forces shot out the tires and it took me a couple of turns to realise that this had slowed me so much I would be quicker getting out and walking!  The truck manage to limp to the edge of town before bursting into flames but the Leader was able to leap out and run off into the desert night.  All the remaining Fanatics died...erm...Fanatically.   So technically a win for the Fanatics but I think the Leader will have a bit of trouble recruiting new followers....

I made a couple of errors with the rules...it took me a while to work out that when firing each figure may fire multiple shots depending on their weapon.  This generates more hits but also more noise in the Stealth game.  I also forgot all about the morale rules: the Fanatics took a lot of casualties and should have run away but, hey, they were meant to be Fanatical!  I also had to wing it slightly on a couple of situations eg my leader leaping into the truck and driving off.  There are rules for vehicles but I decided that it should take 3 turns for him to get up to full speed.  A slim volume like the Osprey rules can't be expected to cover every situation but as long as you all play in the spirit then it generally works out ok.

Another excellent set of rules...less confusing than Force on Force I suspect. It would be interesting to try these with a more straightforward stand up fight but I think they would work well.  Coincidentally on the next table at the club there was a Vietnam game also using Black Ops...in this case it was a VC attack on a convoy and they seemed to be having fun too!

I suspect a lot of you will already have seen both of these items but it's always worth another plug....

The annual Great Wargaming Survey which has been run by the haps at Wargames, Soldiers and Strategy magazine is having it's latest outing at the moment.  It usually makes interesting reading and is worth spending 10 minutes to complete...there are prizes and everything!  The closing date is August 19th...

The other news item which caught my eye is the return of Time Commanders.  This was a BBC series back in 2003-2005 which let teams " go head-to-head with some of the greatest generals from history".  It was more entertaining that it sounds...usually the pleasure came from watching the teams fall apart as one of them would ignore the instructions of everyone else and do something stupid (actually that sounds like a normal team game...and yes, it's usually me doing the ignoring!).  The performance of the team would also be picked apart by a panel of experts including Dr. Aryeh Nusbacher of Sandhurst, Mike Loades, Saul David, Mark Urban or Adrian Goldsworthy.  There are episodes available on YouTube I believe.

The original series used the game system from the Total War series of computer games so it'll be interesting to see the difference 11 years has made to the tech.  Looking at the list of battles fought in the first 2 series they seem to have been mainly Ancient with the latest ones being Stamford Bridge and Hastings (presumably because it used the Rome:Total War engine).  The games have since moved on to later eras so perhaps later battles will feature?


I've already had my brush with TV fame this year (hmm...maybe the subject of another blog post...) so over to you folks....

http://www.bbc.co.uk/showsandtours/takepart/time_commanders
Posted by alastair at 11:20 2 comments:


As usual work and life have gotten in the way of regular blogging again so there haven't been any posts for a little while.  Hopefully my normal erratic service will now be resumed!


My job often takes me to the wilds of West Sussex and occasionally into the badlands of East Sussex.  Usually this involves attending a meeting and then heading back home with little chance to see any of the local sites, but the other day I found myself with a bit of spare time after a meeting on Lewes.

Now, I'm known for an interest in castles and Lewes is the site of the remains of an 11th century castle and, of course, the Battle of Lewes.  The battle (as I'm sure everyone knows) was fought between Simon de Montfort and Henry III in 1264.  Henry rather foolishly made the mistake of leaving his nice comfy castle to fight and would have been ok if his son Prince Edward hadn't gone charging off table leaving his father somewhat exposed.

The castle itself now consists of a couple of main towers and an attached small museum and was a nice spot to while away an hour or so although I did have to negotiate my way round the wedding reception that was taking place in the grounds.

The castle was started in 1069 by William de Warenne, 1st Earl of Surrey and the original castle mound is now adjacent to the main castle itself... 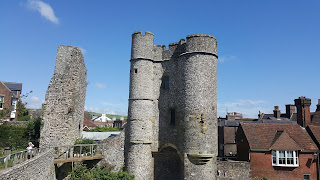 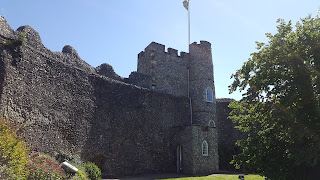 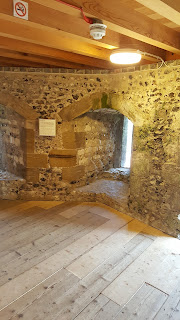 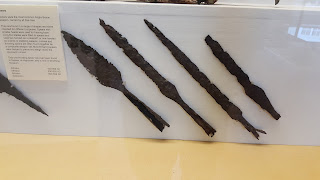 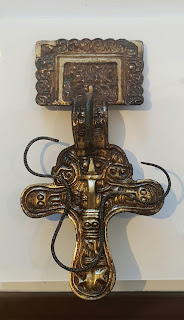 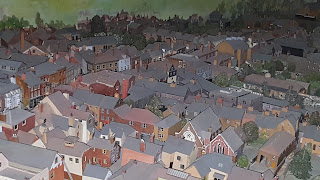 Lewes itself is a pretty little town chock full of antique shops and bookshops (and nightmarish parking!).  I also discovered that one of my heroes, Thomas Paine lived there for some time, in this house... 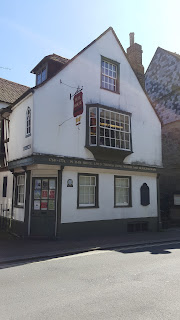 I seem to be having regular meetings in Lewes at the moment...certainly nicer than East Grinstead!
Posted by alastair at 18:34 3 comments: