There seems to be a real spate of very generous bloggers giving out prizes for reaching significant numbers of posts, views, followers etc.

I recently won a set of ECW cavalry thanks to Tamsin at her Wargaming Girl blog (link) and now the latest competition is a very tempting one over at Trouble at T'Mill... Link.   In this competition the prize is a set of Too Fat Lardies rules...as I'm a real sucker for rules from TFL I couldn't resist.

Excellent blog too...well worth popping by and having a look.
Posted by alastair at 19:50 No comments:

In Her Majesty's Name - Warehouse Mk2


My first attempt at the derelict commercial building from Stoelzels Structures was pretty poor so I've had another go.

This time I decided not to bother with the separate floors or the interior detail.  It would be nice to be able to use the interior but I'm not convinced it's essential, so solid walls it is!  The roof was going to be detachable but thanks to some slightly wonky cutting on my part it was easier to glue it on.

I'm a lot happier with the results...my plan is to have a couple of these along with some town houses.  They also produce a larger warehouse which would go nicely but is a bit more ambitious!  It's still a bit ropy in places and the roof needs a bit of attention...I may try building up a small wall around the edge. 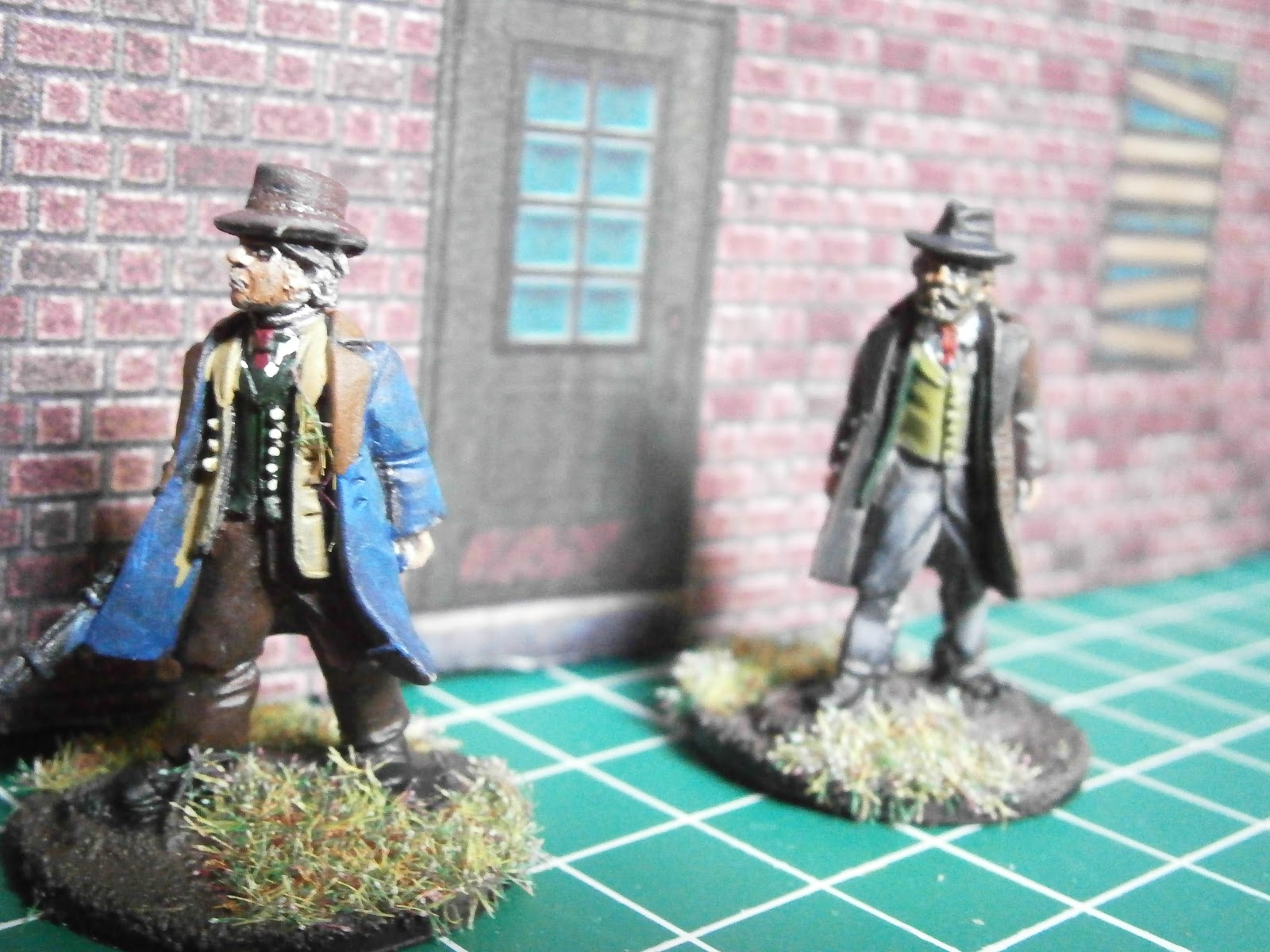 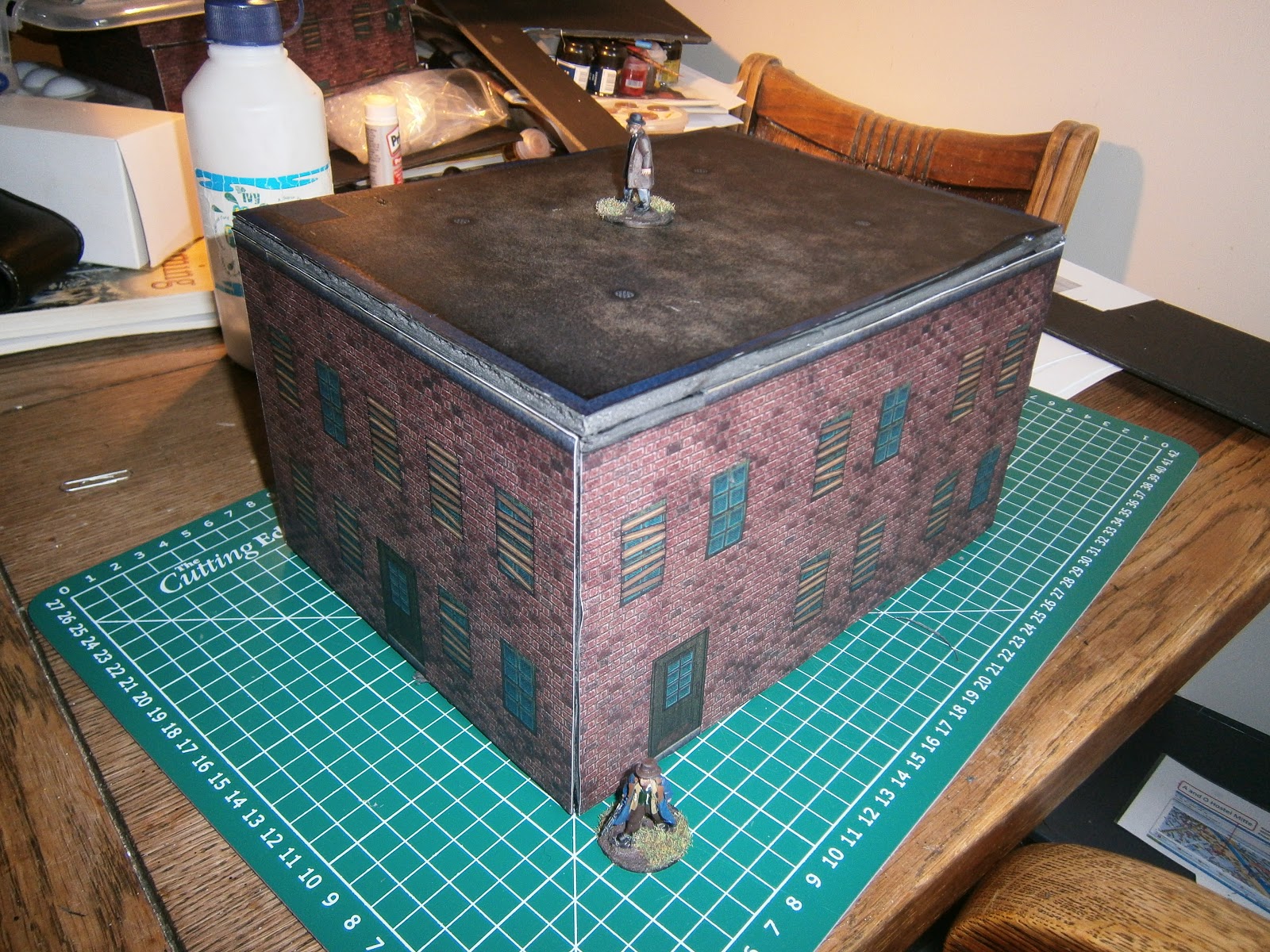 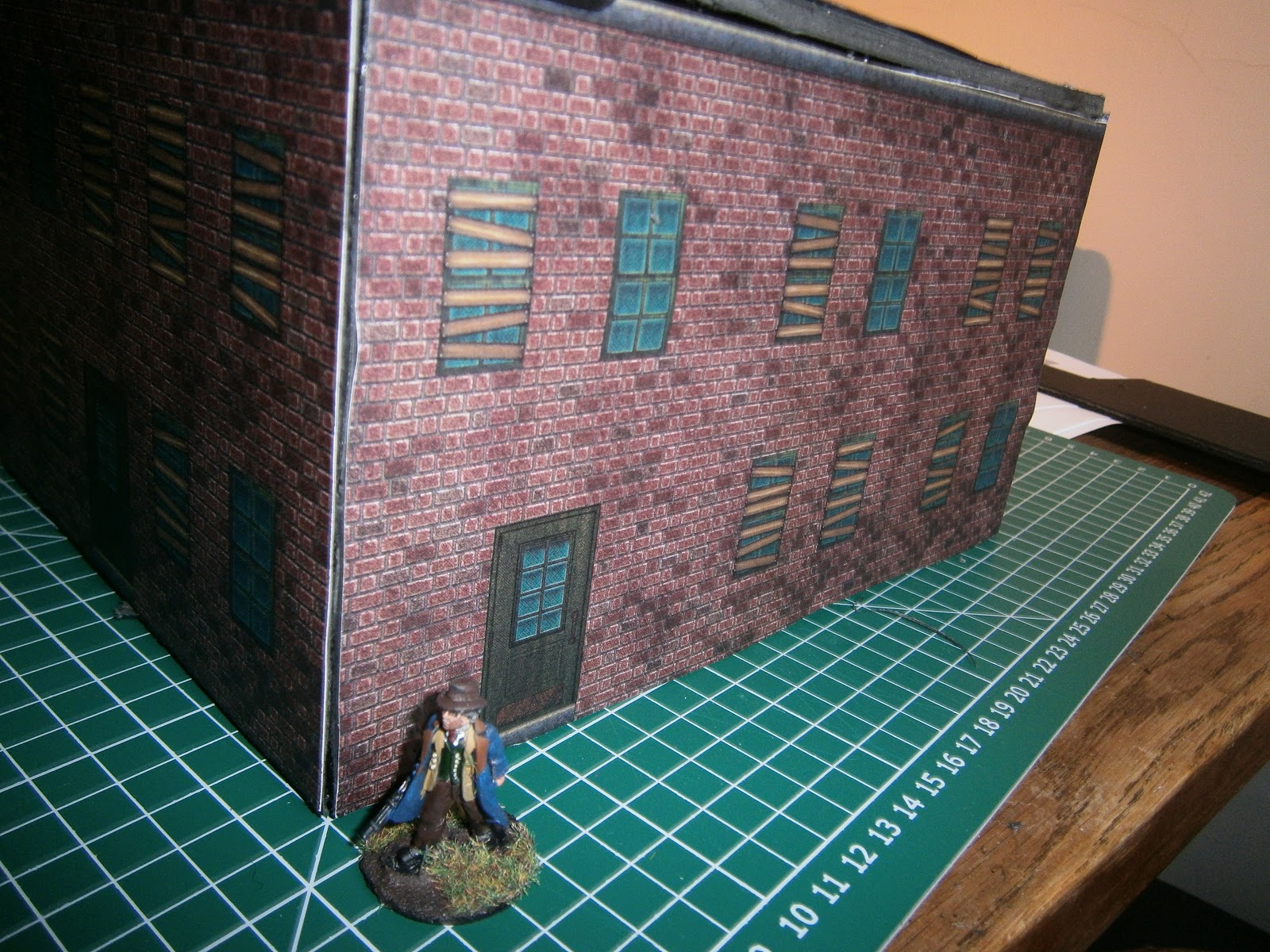 The models can be found here and the commercial building is free!  Handy if it takes you several attempts to get it right like me.

Email ThisBlogThis!Share to TwitterShare to FacebookShare to Pinterest
Labels: In Her Majesty's Name

Scotland Yard and the mystery of the finished project


Breaking all my normal habits I've actually finished painting something I bought at Salute!!!

Normally I assemble some of the figures, paint a few and then leave them to languish in a box as one of my many half finished projects [or in some cases leave them in the Salute bag and put them in the loft, never to be seen again!]

But, having painted up the Servants of Ra for In Her Majesty's Name, I wanted to keep going and I've now completed the Scotland Yard set as well!  It's a really nice set with a plain clothes section led by an Inspector and Sergeant who seem very inspired by Ripper Street (a good thing!  I've just picked up the boxed set as I missed the last couple of episodes and my son was pretty addicted).  There are also 4 uniformed coppers armed with truncheons, but being VSF these are "electro-truncheons":  I decided not to add the cables connecting them to the power packs...partly because it was a bit fiddly and very fragile, but also because I didn't like the aesthetic look of them.  Finally the squad includes a nice Detective and Doctor: I also painted the Moriarty figure that I got as part of the pre-order... A nicely elegant villain hiding a pistol behind his back. 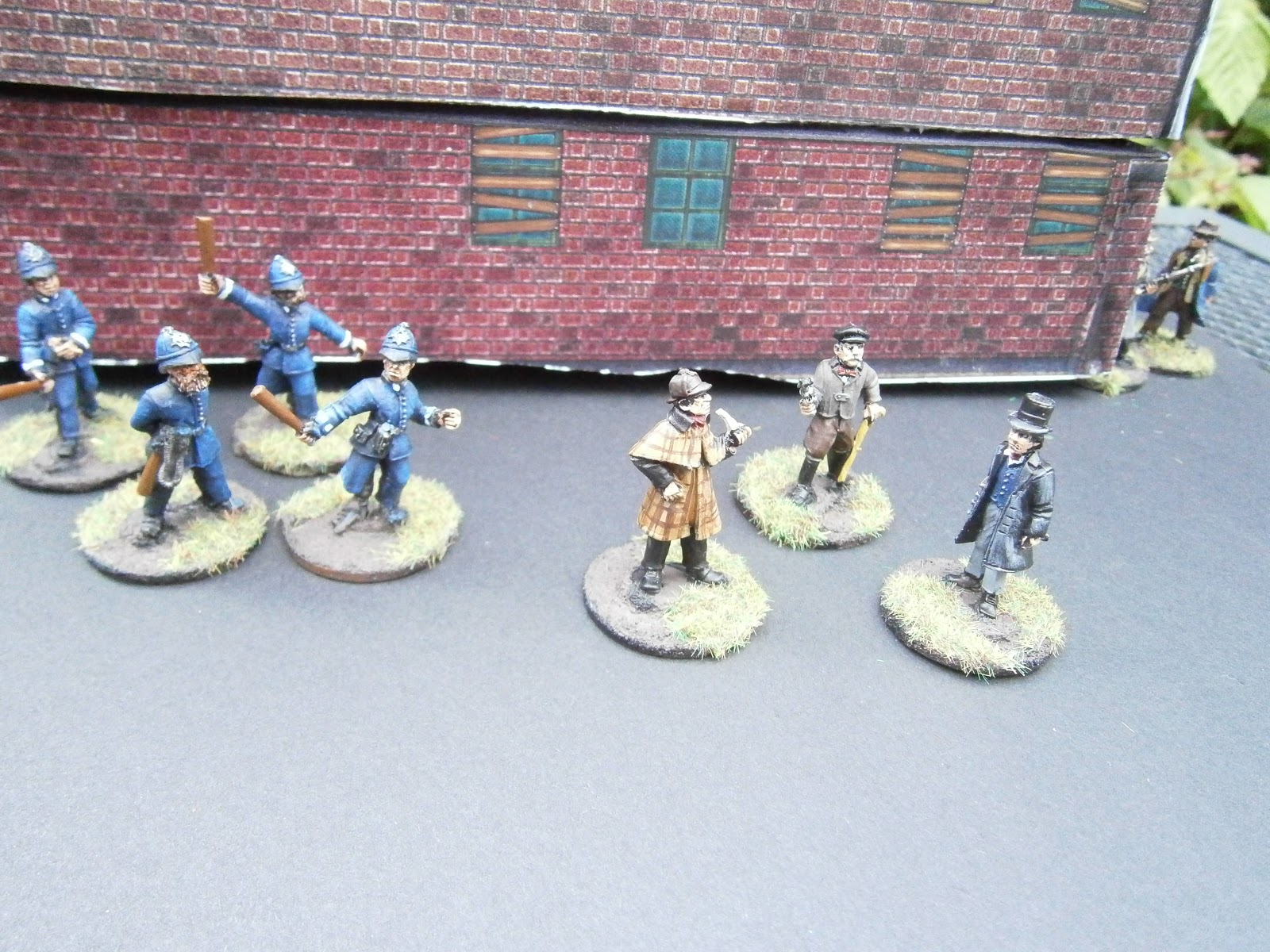 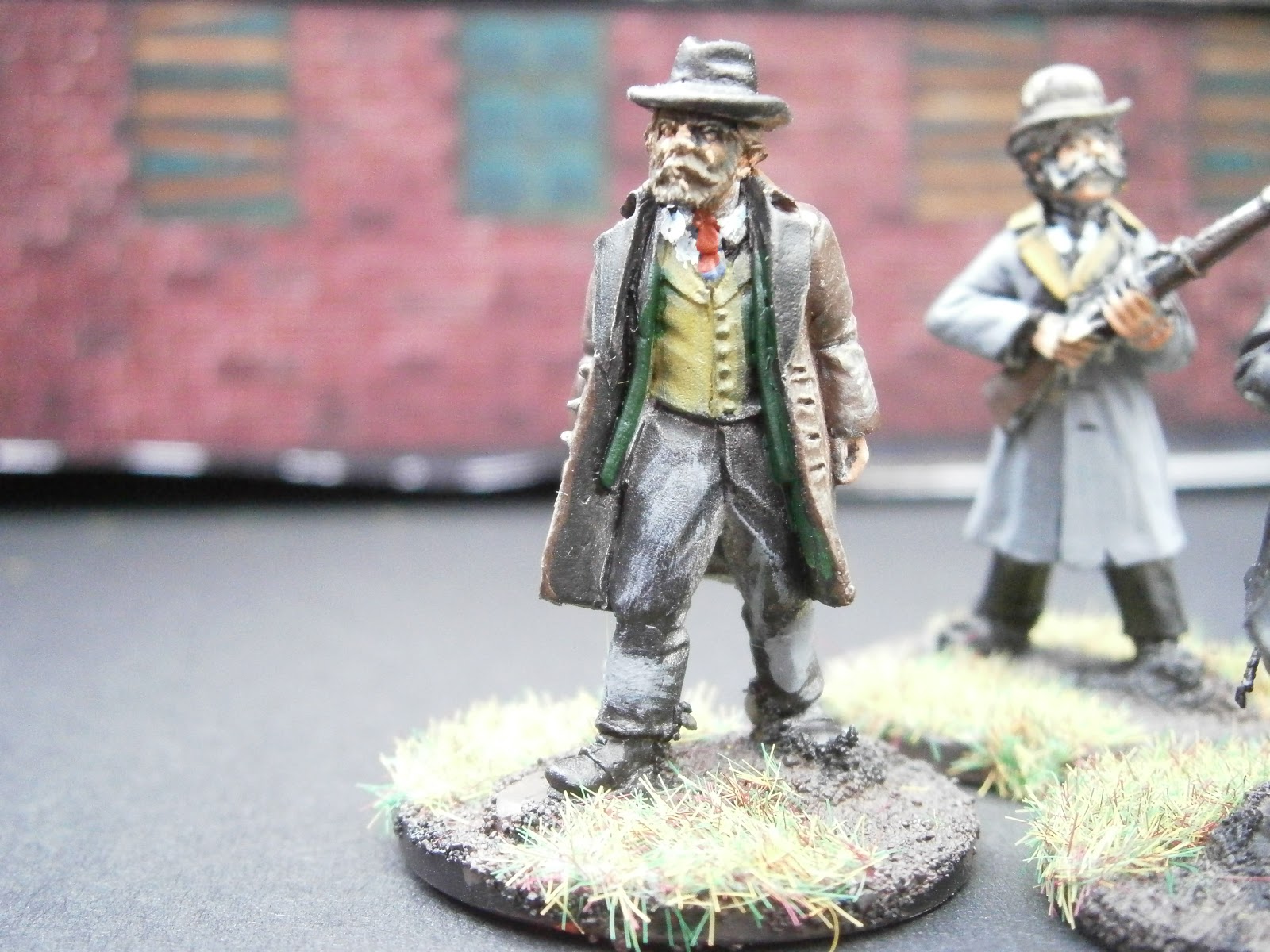 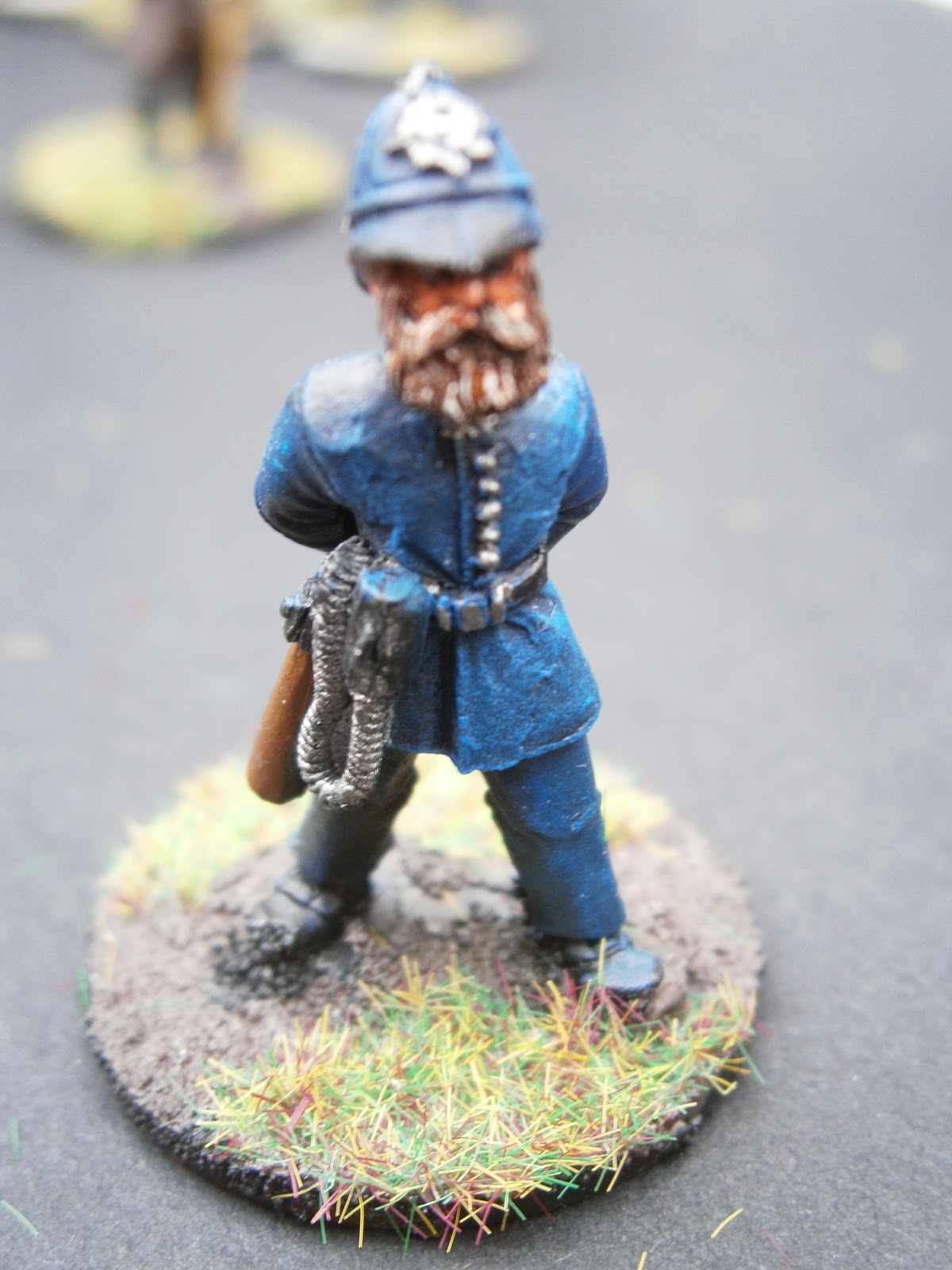 The buildings in the background are from the really very nice range from Stoelzel's Structures.  I've built a few card buildings in the past but this is the first time I've attempted something more than just building a box and the first time I've built around a foamcore interior.  The building shown is a free downloadable Warehouse which has various options for the interior.  I decided to try building it as a series of 3 layers and to be honest it's a bit scrappy in places.  I've certainly discovered that I lack the ability to cut in a straight line!!  As you can see the floors don't line up very well and the white foamcore shows through in places... nothing to do with the model and entirely down to my crap modelling skills!!! 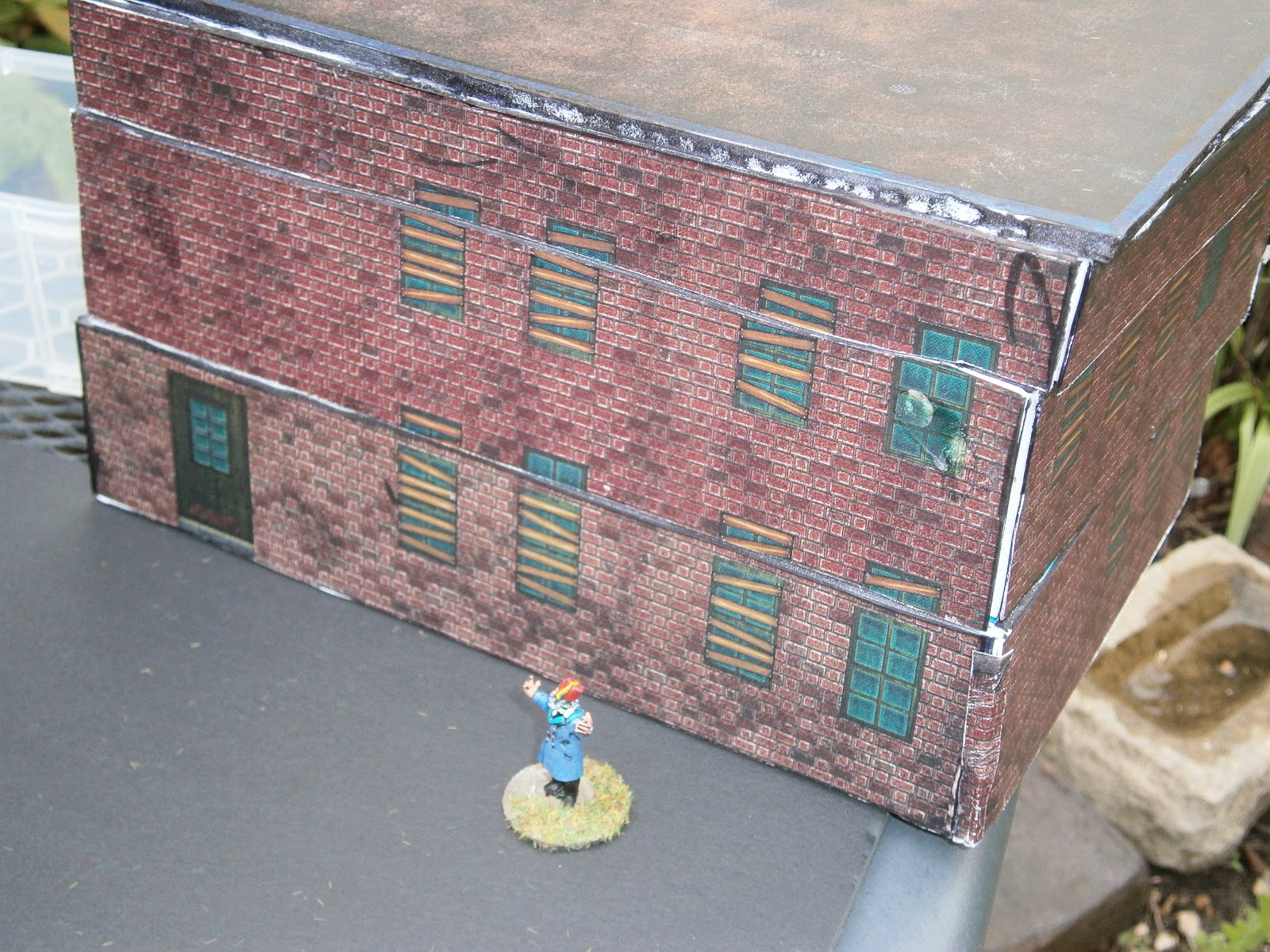 I've decided to have another go [which is the advantage of downloads] and will probably ignore the separate floors and just build it as a solid building,or perhaps just have the roof detachable, and use black foam as a base so the edges should be less obvious.  I'll post the results when they're done [unless they're too embarrassing!!]

The range of buildings available is really impressive and I've also downloaded a couple more including the Old Town buildings which may have been a bit over ambitious having seen the huge number of pages of walls that were in the PDF... the kit comes with each building in a range of shades to reflect daylight, dusk and night time!!  The kits can be found here... Stoelzel's Structures and are well worth a look.
Posted by alastair at 23:23 2 comments:


I've always thought one of the best things about Black Powder is the self-assembly form of the rules... although there are stats listed for various periods the rules are designed to be tinkered with and a degree of research into your chosen army is required.  I'm a big fan of army lists too but the BP approach does mean you have to learn a bit more about the period... my old History teacher would be proud!

I haven't wheeled out Black Powder in a while but we played a game last week based around a War of the Spanish Succession.  Andrew and I played the French/Bavarians attacking Dave and new member Kevin's allied convoy.  If you haven't played BP each commander has to roll to see how many orders his units can carry out [or not if he fluffs the dice roll]: my infantry arrived first and sped towards the small village in the centre of the table although I expected the Allies to get there first.  Thanks to a command blunder [by rolling a double 6] my steady advance turned into a full on charge which actually meant I arrived first, charged right through the town and into the leading Dutch troops!  After a bit of a tussle the Allies were thrown back and the French settled down to defend the town.

Andrew's first cavalry brigade arrived and, having successfully passed 3 orders, charged right across the table and rode down half the wagons!  By turn 2  we'd achieved half of our victory conditions.  Unfortunately the first of Dave's infantry reinforcements then arrived right in front of the cavalry and gave an effective lesson in the advantage of massed musket fire.  The cavalry were driven back and eventually, after a few turns of trying to disengage, were routed.

My infantry in the centre were holding their own against the Allied troops despite Kevin managing to nearly turn my flank and managing to get some nast enfilade fire into one unit, and had seen off a cavalry attack on the right flank, .  Andrew's 2nd cavalry brigade then arrived and counter-attacked the cavalry on the right flank, apart from 1 French unit who very sensibly decided to interpret an order to advance as "head back off the table".  The other units charged headlong into the Allied cavalry, breaking them too.  They managed to destroy some more wagons, leaving just 1 which had little chance of getting to safety. 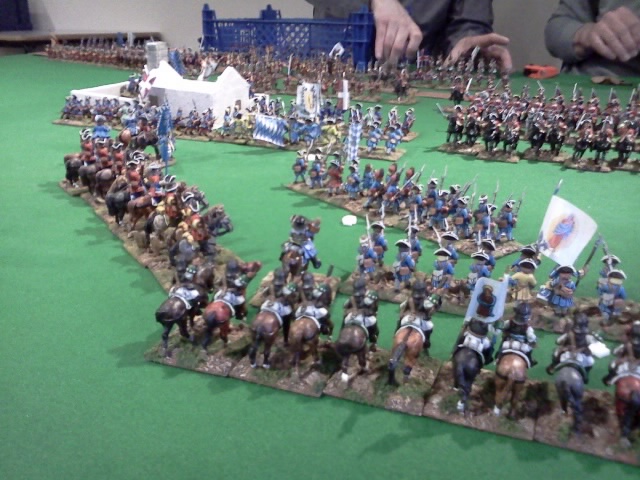 The firefight in the centre was slowly going the way of the French... although the Allies had been able to bring up a fresh brigade the units were all slowly beginning to reach their stamina limits and there was a danger of the Brigade collapsing.

At this point we decided that the Allies had lost the day with only 1 wagon left, a very shaky centre and French [or Bavarian] cavalry loose on their flanks.  Black Powder always gives a fast moving and pretty exciting game and this was no exception.  So far I've used these rules for AWI, colonial [Zulus], Franco-Prussian War and now the WAS and it works well for them all with a bit of tweaking.

Next week we're having another game, this time based around the FPW.
Posted by alastair at 22:51 No comments:

In Her Majesty's Name and other stuff...

Normally when  I've been to Salute or another big show I buy a few bits and pieces which then languish in a box or in the loft.  Eventually I might get round to painting them up and, who knows.... actually playing with them.

This year having bought the North Star, In Her Majesty's Name figures I was keen to actually make a start and get something painted.  I bought the Servants of Ra and the Scotland Yard set as well as the rules and decided to have a go at the Egyptian cultists.

Having looked at the box art I decided to stick largely to the red robes (it somehow seems appropriate for your traditional Cultist].  I decided the Eye of Horus on their chests looked a little too ambitious for me though and left their robes plain. 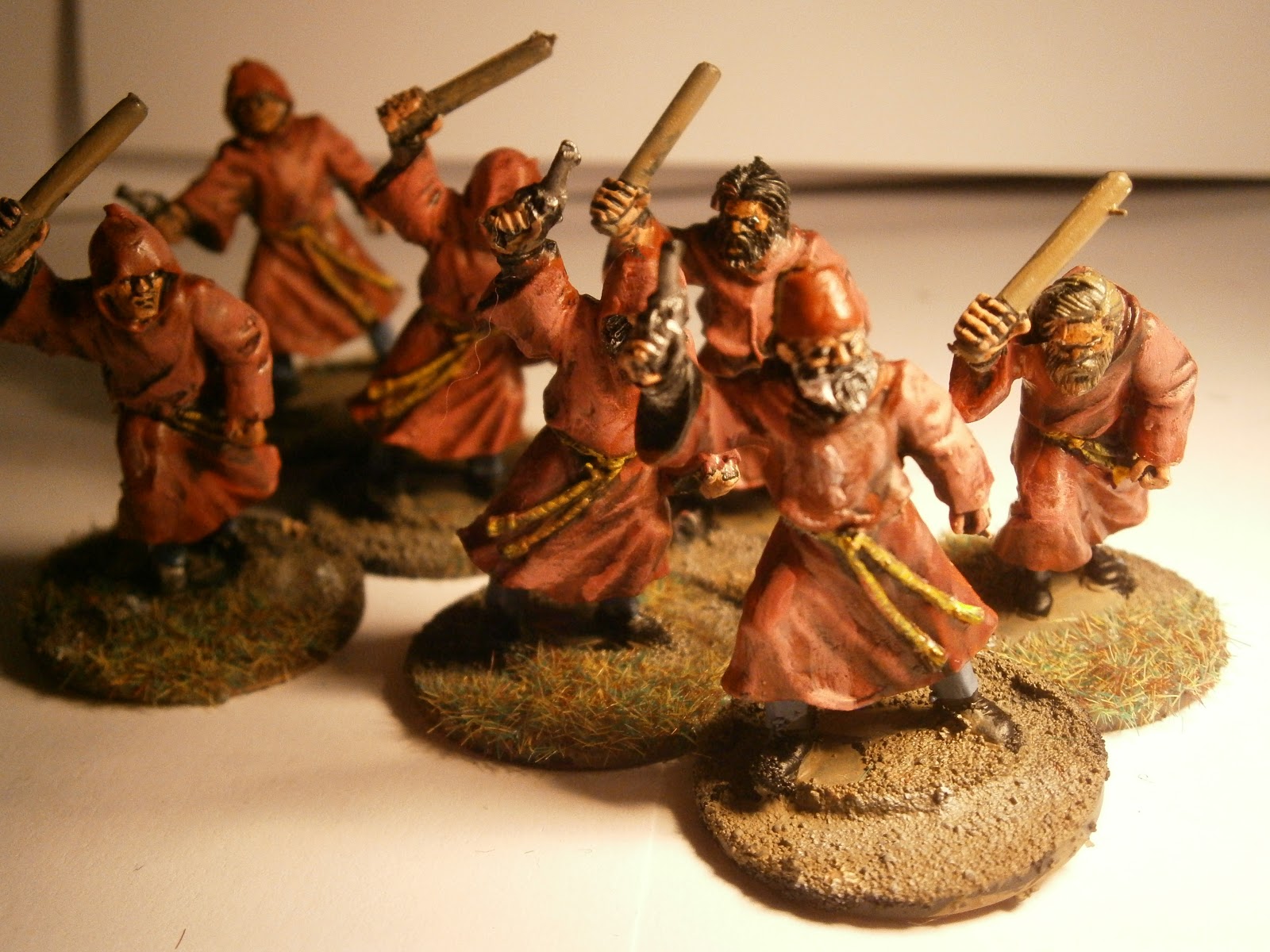 I'd been less sure about painting the group leader Akhenaton as the combination of a black suit and eye shadow seemed a bit daunting but the shading worked well on his suit and I decided to ignore the eye detail as it would have ended badly! 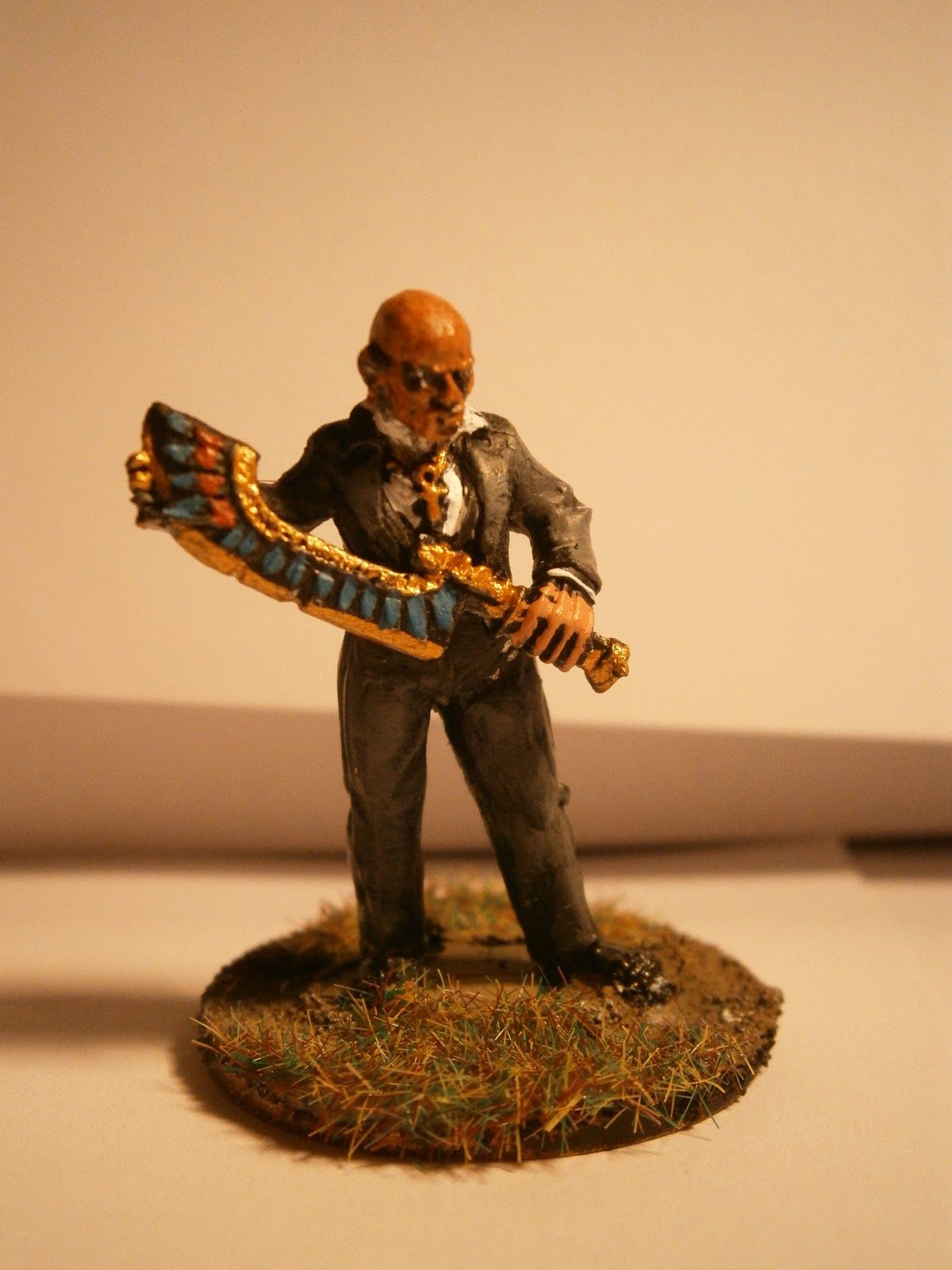 Sairah, the drug crazed Hashashin daughter of the groups magical professor [no stereotype left unturned here!!] was also a bit tricky... lots of silky clothes and a slightly flimsy foot joint which I'm still not convinced about... but worked out ok too... The robes looked kind of washed out in the photo due to the lighting but are actually a light turquoise.

I also acquired a large steam mole burrowing machine-thing from Ironclad Miniatures which doesn't quite fit with the Egyptian theme but is a really nice model.... 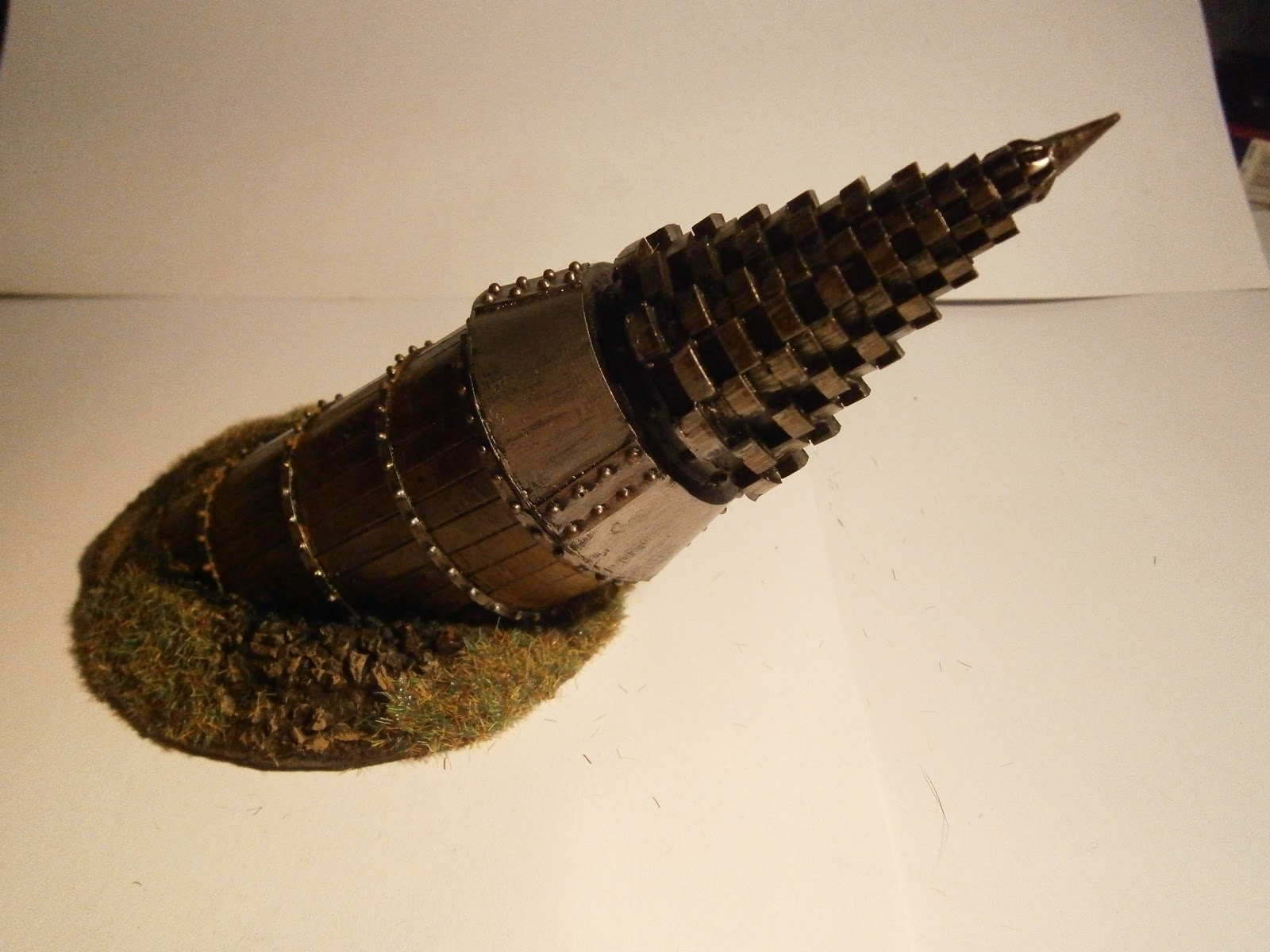 And finally I've made a start on my new Peter Pig ACW Ironclad ships....

On a different topic entirely, we've been rediscovering RPGs [there's a post on it somewhere from last year]... Call of Cthulhu has been a big success including the Cthulhu by Gaslight variant which all ties in nicely with the steampunk theme [or is it VSF...and what's the difference??]

Our latest venture is Space Opera, the old FGU game. 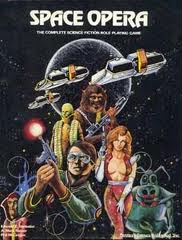 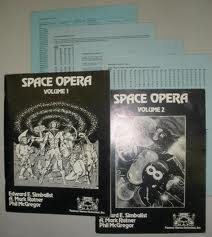 Those of you who've played it are probably sniggering by now but I had good memories of this from many, many  years ago...in fact I have a soft spot for most of the FGU games from the 80's.  The game is, according to most reviews, pretty unplayable but I always felt it had a really nice flavour and is broad enough to let you play anything from the Star Wars high fantasy type game to a more gritty Traveller style campaign.  So far we've established it has a mind numbingly long character creation system but does include a 'Wind Factor' stat for characters [stop sniggering]....
Posted by alastair at 23:14 3 comments:

Email ThisBlogThis!Share to TwitterShare to FacebookShare to Pinterest
Labels: Ironclads, Role Playing, VSF
Newer Posts Older Posts Home
Subscribe to: Posts (Atom)
"At the age of four with paper hats and wooden swords we're all Generals. Only some of us never grow out of it."