The first show of the year for me is always Cavalier...as short hop round the M25 and A21.  It's a nice sized show based in a local Leisure Centre in Tonbridge and usually has a decent turn out of traders and games.

This year was no exception...the show seemed reasonably busy when I got there around lunch time.  I'd had a few items on my shopping list...none of them essential for any ongoing projects, just things I'd spotted and been tempted by.  In the event I only picked up one of them and bought something I hadn't planned for (well...there's a surprise!)

I bought a set of the Oil storage tanks from the new Team Yankee range.  These should go well with some of my modern Afghan/Middle East terrain including an oil derrick and make a suitable target for blowing up.  I recently picked up set of the newish Osprey rules Black Ops so these will be handy for covert sabotage games. 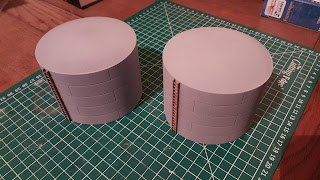 I also succumbed and bought a copy of The Great War. the Memoir 44 variant game.  I've fancied this for some time and spotted it at a reduced price so I couldn't really say no...of course this wasn't on my shopping list! 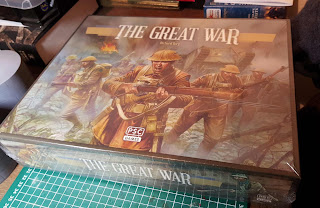 I nearly bought some of the Ironclad miniatures VBCW armed miners...I've occasionally played games in this period at Eric the Shed's VBCW games but had no great plans to build forces.  The figures are really nice though and, coming from Lanarkshire, the thought of bolshie miners appeals.  I didn't buy them but am already regretting it...I can see these being on the list for Salute!  I was also tempted by more Heroes of Normandie stuff ...a Pegasus Bridge supplement and one from the French resistance, and the Warfighter modern card game.  I managed to resist the HoN stuff...I already have quite a bit and have more ordered via the recent Kickstarter.  The Warfighter game looks tempting but although they had various supplements for it, I couldn't find an actual set of the rules...probably just as well!

Apart from shopping there were a number of games on...no photos I'm afraid.  There were a couple of interesting looking participation games...a Zulu game which seemed to be based on Saga, and the Crawley Wargames Stretcher Bearer game which I played at SELWG and which is great fun.  Apart from that there were a range of games all looking very fine but I forgot to actually take any pictures!  The Bring and Buy seemed pretty busy when I popped by but I didn't spot any bargains sadly

I also bumped into Ray (link) who also seemed to be resisting the urge to spend too much.
Posted by alastair at 22:53 6 comments:

So there's been a bit of a gap in posts...nothing since 24th Jan.  Work has reared it's ugly head again and tied me up on several gaming nights.

I've managed one game of Frostgrave since the New Year, kindly hosted by Eric and a couple of weeks ago I played out the 3rd and final game in the Heroes of Normandie D Day mini-campaign.  The previous instalments had meant that the German's had managed to acquire artillery support for the finale but the US began the game with several bits of wire removed thanks to their success in Game no. 2.  The US made it up to the edge of the beach but with (not surprising) heavy casualties and weren't in a position to drive the Germans off so France was kept Ally free on this bit of beach at least.

Onto this week's game.  I have a bit of a never ending search for a good set of skirmish rules for Star Wars (and other SF settings).  Previously I've used Tomorrow's War, Mutants and Death Ray Guns, Star Wars Miniature Battles...all of which worked fairly well with individual plusses and minuses.  I'd noticed that the rules that often get mentioned on places like TMP and LAF are 'Blasters & Bulkheads'... these are available from Wargames Downloads  and Lulu etc.


The rules are very much set in a cinematic Space Opera style with figure representing either Characters or Henchmen (who act as a group).  The rules allow you to tailor the characters to a particular setting by assigning them traits and skills to suit.  These can include the use of 'Essence' skills (...as in 'use the Essence Luke'...) which replicate very neatly the Jedi/Sith powers we know and love.  Game mechanics are fairly straightforward: all dice rolls are d6 and everything succeeds on a 4+ (with a 6 counting as 2 successes).  Armour and skills can give figures the chance to re-roll hits which can make armoured troops, like Stormtroopers, pretty tough... although not, as we discovered when a Wookie runs amok with an axe! 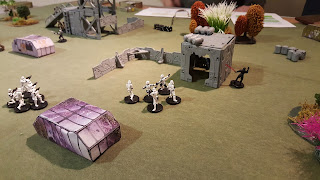 The scenario I'd cobbled together set a band of rebels and some Imperials both trying to capture a broken down droid which (as is obligatory in Star Wars settings) contained vital information.  The rebels took the offensive charging at the Imperials who were doing their best to wipe out the Rebel henchmen before moving onto the Characters (possibly a mistake).  The Rebel Characters meanwhile were slicing and dicing their way across the table showing that hand to hand combat is quite effective...especially when you're a Wookie or a Jedi.  The squads of Stormtroopers were very ineffective in melee as they weren't able to shoot and we discovered that punching a Wookie (even when you outnumber it by 5 to 1 is a recipe for disaster!!). 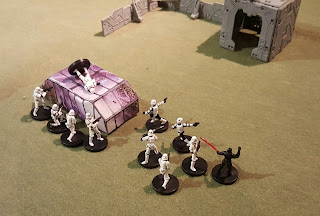 The Imperials had a Boba Fett type mercenary with them who managed to fly to the top of the ramp where the droid was inconveniently positioned and successfully activated it.  Sadly he then encountered the angry Wookie and was KO'd.

The Imperials definitely came off worst and the day went to the Rebel Scum.  As I was umpiring I'd sneaked on some Jawas who's been attracted by rumours of a broken down droid...my intention was to use these to cause mischief for both sides but I was distracted by umpiring and brought them on too late so they played little part although they did manage to worry both sides!  Oh well...my mighty Jawa army will have to try again another day. 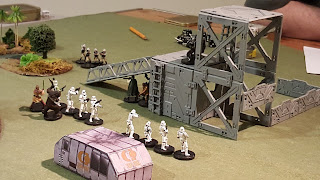 The rules were pretty clear and intuitive...there was some confusion when reading them about terminology (DN numbers and Goal numbers etc) but once we started playing both Andrew and Martin picked the mechanics up very quickly.  The skill system allows you to tailor the game to suit a particular setting so it could certainly be used for a more gritty setting.  There are rules for vehicles and campaign play but I didn't use these first time out.  Definitely worth exploring some more I think.

Email ThisBlogThis!Share to TwitterShare to FacebookShare to Pinterest
Labels: Star Wars
Newer Posts Older Posts Home
Subscribe to: Posts (Atom)
"At the age of four with paper hats and wooden swords we're all Generals. Only some of us never grow out of it."