Thanks to a post on Bob Cordery's excellent Wargaming Miscellany blog I was alerted to a deal at the Flying Tiger chain of stores.

I'd never come across these before but the seem to have stores all across the UK.  originally from Denmark they sell a wide range of Ikea-ish small craft and household items.

The one that had caught Bob's eye was a magnetic pad, I guess designed to stick on a fridge etc as a wipeable memo  pad (it comes with a pen). 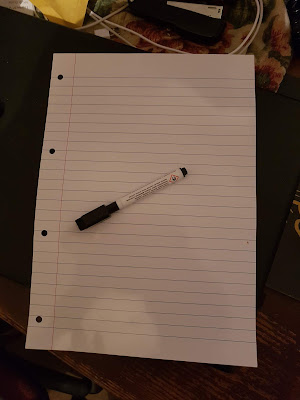 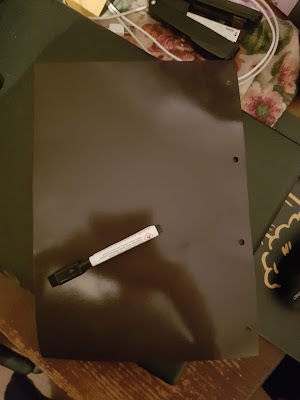 Conveniently these are A4 sized, so ideal for lining a box of toy soldiers!  The pads retail for £2 each so a pretty reasonable price.  As there was a shop in Kingston I hopped on a bus and picked up a few.

Worth picking up if you have a store near you.
Posted by alastair at 22:28 8 comments:


More additions to my Lanarkshire themed VBCW force.  My armed miners were all very enthusiastic but I figured they'd need a bit of support from some well-drilled regulars.  Luckily the Cameronians were based in Hamilton in the inter-war period 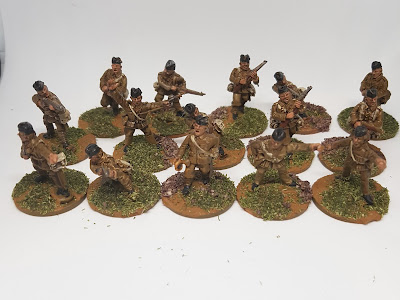 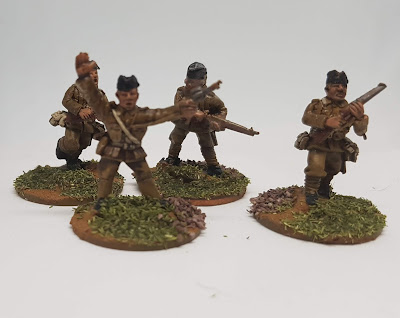 And for a bit more dash and flair we have the Provisional wing of Hamilton Academicals FC.... 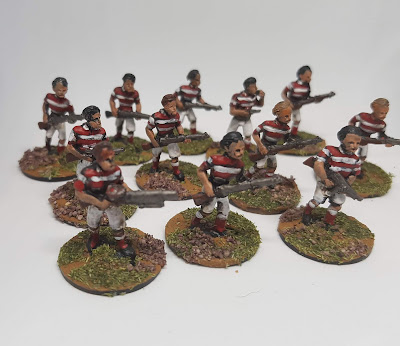 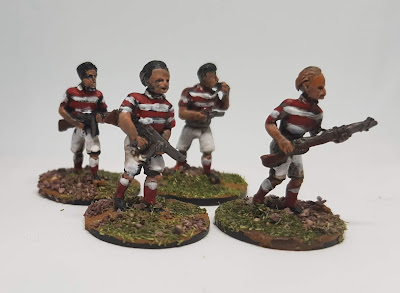 The Cameronians are by Reiver Castings and the armed footballers are from Irregular Miniatures.

Although I'm not a great football fan I found a fascinating website which gives historical strips for teams in Scotland and England... Link.  Now I just need to decide whether to deploy them in a 4-4-2 or 4-3-3 formation!
Posted by alastair at 20:52 2 comments:

This is one of those blog posts that has been lurking in Draft Limbo for several months and was doomed to never see the light of day.  I have a couple of these which get started in a fit of enthusiasm and then fall by the wayside.  I usually end up deleting them as they aren't relevant but this one has survived the cull and, thanks to a bout of painting, has finally seen the light of day.

I bought Test of Honour back in April at Salute.  I've always been a fan of Samurai based games and played quite a few using Ronin (by Osprey)...amazingly when I checked on the blog posts, my last game was 5 years ago!  I'd picked up some of their smaller packs a while before and eventually weakened and bought the boxed set as it was going for a good discount at Salute. 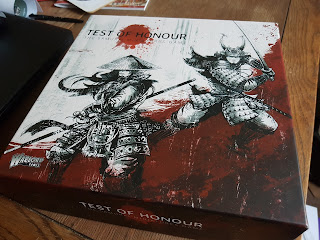 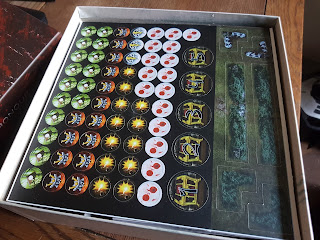 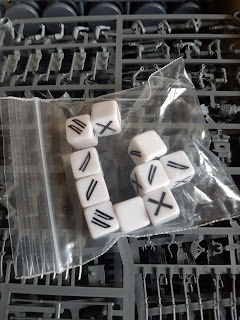 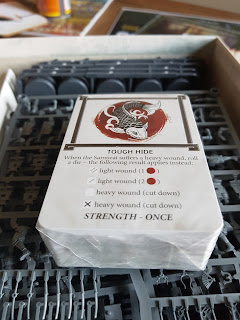 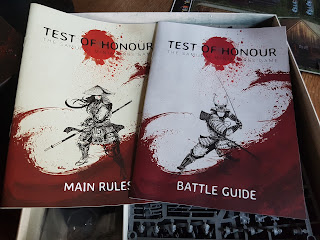 The figures are actually the old Wargames Factory figures and are exceptionally fiddly to put together.  They come with legs separate legs, bodies (in 2 halves) and arms...and that's before you start working through the variety of heads and weapons they can be equipped with!  There are enough figures supplied to make 30 figures which is more than you'll need for a game so there is plenty of scope to have some variety in the weapons and poses.

I had real problems working out the arms in particular...it might just be me but I have real trouble picturing what the eventual pose will be until I've glued the arms on.  As I use superglue this can mean that I end with figures in very bizarre poses which are no use for holding weapons.  Eventually I'd managed a production line system for the figures which seemed to work better and I'd grasped which arms did what.

The other issue I had is the range of weapons: the figure below is holding a sword with what appears to be some kind of ball on the blade.  I'd wondered if he was using his katana to slice oranges for his lunch but apparently it's actually meant to be positioned the other way round as though he is drawing it from the scabbard and the ball fits into one of the hands (if you've worked out which hand is which)… he's since been given a katana-ectomy and has a nice new sword without attached fruit. 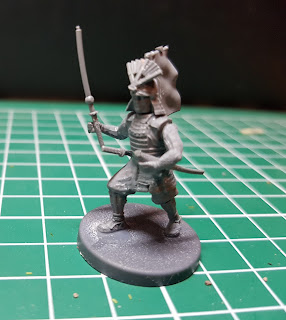 My only other niggle with the figures is that they feel very light but this was easily remedied by gluing a penny underneath the base.  This might all sound a bit moany...the figures are actually very nice.  I've put together a dozen of them and I'm pleased with the results.  I chickened out of trying to paint the Mon patterns on their Sashimono and bought some transfers from Veni Vidi Vici.  A handy tip I'd found online was to use the 25mm transfers for the large flags and 15mm for the individual sashimono.

Now to work on another dozen or so figures and then actually try the rules out! 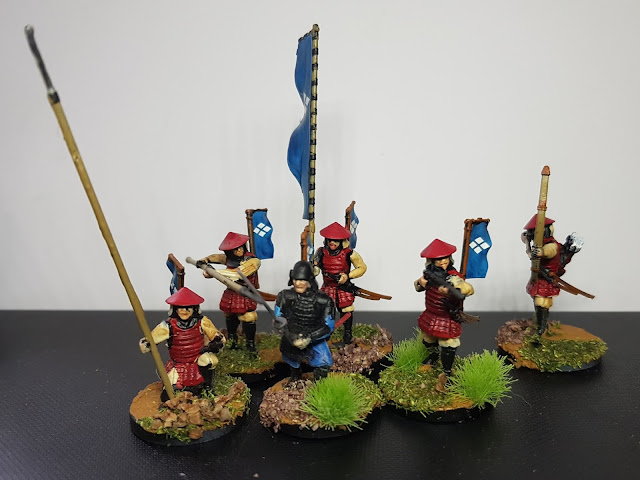 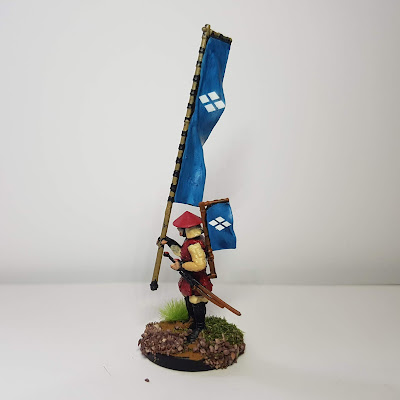 
I managed a couple of boardgames over the last week or 2.   My son and I had a game of Labyrinth (from GMT Games).  There is more info on it here but essentially it's a challenging, and a little bleak , game pitting the US against Jihadists, trying to bring peace and stability to the world or to destabilise countries and gain influence (you decide which one's which!).  It's a great game but not always necessarily 'fun'.  It was a pretty close game until my son managed to set off the nukes (that he'd acquired while destabilising Pakistan)  in the US giving him an automatic win! 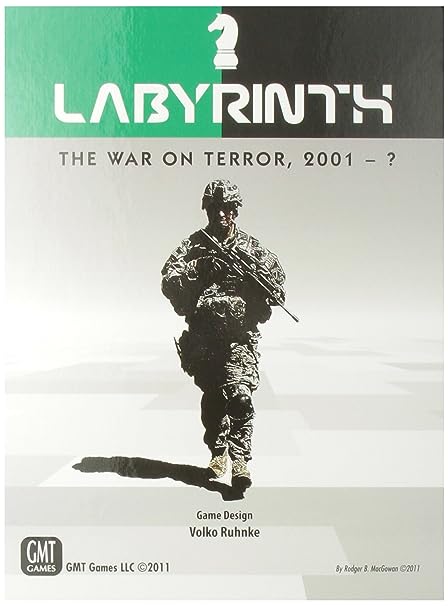 There was an interesting article in the last issue of Tabletop Gaming about boardgames that the CIA use for training purposes...someone had cleverly spotted that government produced material lies in the public domain if it hasn't been classified and quickly sent in a FOI request.  The CIA released a stack of everything to do with the projects (including practically every memo and rough notes) and there are several interesting games including one designed by Volko Ruhnke who designed Labyrinth and who happens to work with the CIA.

Last week I popped over to my friend Andrew's and we played out one of the scenarios from the GMT Games (I'm increasingly a fan of this company).  This was the battle of Eutaw Springs in which the British were unsportingly attacked by the nefarious colonials while out picking vegetables for breakfast! 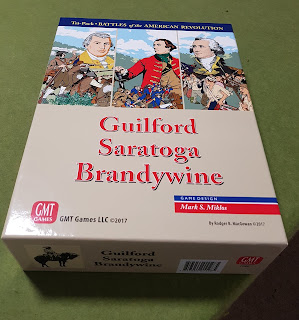 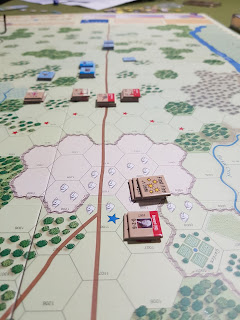 A fun game with a lot of material in the box.  By the end of the evening (we didn't quite complete all the turns) the British were just about holding off the Swamp Fox and his mates but it was all beginning to fall apart.  If we'd had an extra half hour to play out the last couple of turns I reckon I would have caved in.  Great fun!
Posted by alastair at 17:35 2 comments:

Force on Force - skirmish in Yemen

It's been a long time since I've played a game of Force on Force but I was persuaded to dig it out by my son who was back (briefly) from uni.  He cobbled together a very contemporary scenario set in present day Yemen.

A drone strike has been launched on a high value target and a force of US special forces (obviously not 'offically' there)  backed by some (not very good) Yemeni soldiers are sent in to recover the remains of the target or to capture him if he is still alive.  In the town, recovering from the effects of the drone attack are some good quality Al Qaeda troops backed by less effective local militia. 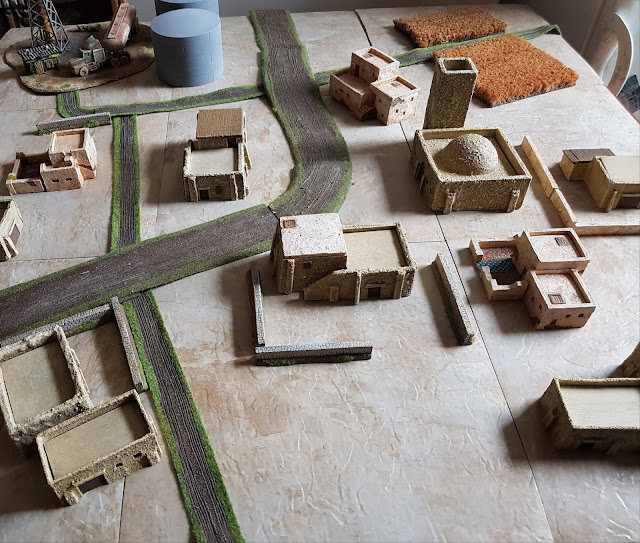 As you can imagine the troop quality for the US is very good, and they are also much better equipped than the insurgents.  The AQ troops are pretty good but the Yemenis and Militia are all pretty poor. 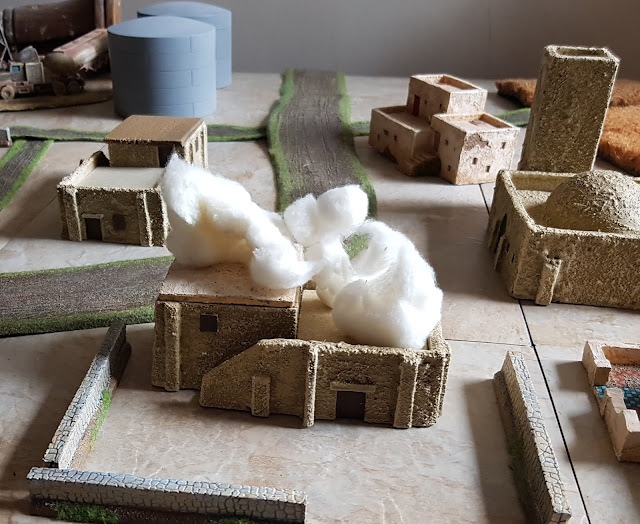 The game started with the US pretty much pinning down or wiping out any squads that got close, but they were also struggling to advance towards the target building.  All the Yemenis arrived on turn 3 and (following a dice roll) arrived on the Left side of the table.  In FoF the reinforcements arrive at "Hot Spots" around the table and luckily for me my reinforcements popped up in buildings surrounding the Yemenis.  The resulting firefight proved pretty bloody on both sides but I did lose most of one of my 2 AQ squads.


It was looking as though the path to the target had been opened up when the US troops got intercepted by my remaining AQ squad which had been patiently hanging back and waiting for a good opportunity.  Some lucky dice rolling led to all 4 of the special forces being hit.  In FoF troops remain 'down' until someone can go and do a 1st aid check but as there was no one close enough to get through, the US forces remained wounded/pinned and out of action and the Yemenis decided to withdraw under fire, leaving their allies behind

An excellent scenario...we decided afterwards that it probably needs a little tweaking to get the balance between the very effective (and armed to the teeth) special forces and the numbers of reinforcements on both sides.  In these asymmetric games it's a challenge not making the Special Forces too special but not having them succumb to too many insurgents.  In the event I was lucky to initially wound a US figure and then take out the remaining 3 in one round.

We're thinking of trying a similar style scenario using Skirmish Sangin for a comparison and when we eventually get round to it I'll post the results. 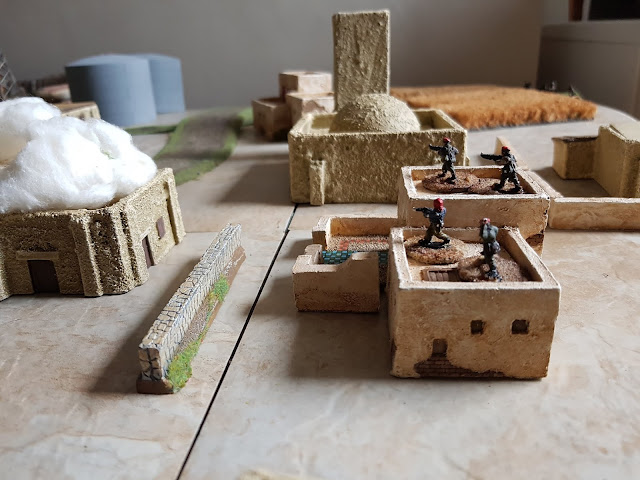 Email ThisBlogThis!Share to TwitterShare to FacebookShare to Pinterest
Labels: Afghanistan, Force on Force, Modern
Newer Posts Older Posts Home
Subscribe to: Posts (Atom)
"At the age of four with paper hats and wooden swords we're all Generals. Only some of us never grow out of it."