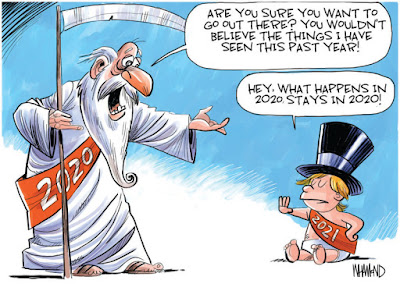 To be honest I've gotten off pretty lightly this year compared with many others... everyone has stayed pretty healthy, work have been really supportive of staff and I've even ended the year with a new, more senior job role (with the same employer).  The downside has been not being able to see family in Scotland which has been really hard, and the impact on my son who is trying to find a job in the middle of a world-wide recession, but compared with many others we can count our blessings.

Traditionally at this time of year blogs do a review of the year and I thought there wouldn't be much to report but when I looked back it has somehow been a really busy and very diverse year gaming-wise.  So here goes...

As far as the blog goes, I managed 50 posts this year (5 more than 2019).  I don't pay much attention to page views but these seem to be growing, although how many are bot-generated is anyone's guess.  For what it's worth posts about Boardgames continue to generate a lot more hits that anything else...I suspect due to this being picked up as a keyword in searches.  Number of hits was never really the point of the blog but it's nice to see comments and feedback from people occasionally and know that there is a wider community out there, so thank you for your comments and support.

My 1st game of 2020 was a game of Star Wars Rebellion (I lost...this may be a common theme!)  Later in January saw the now traditional all day Shed game hosted by Eric the Shed ...this year was a great refight of the 1st Battle of Newbury in the ECW

February saw my Black Seas Napoleonic ships make their 1st (and only, so far) outing.  I also played in an excellent 54mm Zulu game using Osprey's The Men Who Would be Kings.  I started work on what was to become a major project... the Wars of the Roses: at this point we were looking at using Hail Caesar or Lion Rampant as a rule set but that was to change later in the year.

March: my AWI armies took to the table in a couple of games (I lost... again).  These used another of the excellent Osprey Rules, this time Rebels and Patriots.  There was more Wars of the Roses painting: I don't think a project has engaged me as much as this one has for a long time.  And then we had a lockdown...

April: at least the enforced lockdown and the resulting 2 and a half months of furlough meant that I was able to get on with painting.  I started on my WW2 Japanese as well as continuing with the WotR armies.  I haven't painted as much in years as I did during this period.

May consisted of daily dog walks and a lot of baking.  I eventually succumbed to the pressure and took on a large scale painting challenge... the living room and dining room and the stairs!

In June things had relaxed a little and I managed a few games with others. My son had also finished uni by this point and returned home so there was a bit of an uptake in boardgames including a Star Wars Imperial Assault campaign

July: gaming resumed at the Shed with some social distancing.  It was great to get back together with friends and we played various games including some Napoleonics and Colonial games with Black Powder.  More boardgames at home and I was persuaded to join some old friends from uni days for some old-school role-playing but with a Zoom twist.  This was initially going to be a short-term thing but the campaign is still going strong and shows no signs of stopping.

In August Lord Percy made his debut in a Hail Caesar Wars of the Roses game.  Eric the Shed's massive Roman army was also unveiled this month in an epic sized battle.  More boardgames (Tank Duel, Star Wars Imperial Assault) add the arrival of the new addition of Brittania.  I've only managed to play this once  so far and really must get it back out.  I also picked up a copy of Gaslands and some Hot Wheels cars and set off down the rabbit hole into a very addictive game.

In August or September Wargames Illustrated gave away a free ruleset with one of their magazines: Never Mind the Billhooks by Andy Callan.  Very quickly we realised these were exactly what we'd been looking for in the Wars of the Roses campaign and Hail Caesar was quickly dumped in favour of NMTB.  We decided that instead of setting up a campaign game we would refight all the major battles in sequence.  I also played several games of Gaslands, more boardgames (UBoot... excellent!) and decided to scrap the WW2 Japanese project as something that was never going to make it to the table.

October saw more of the Wars of the Roses battles and games of Gaslands.  We got as far as the Battle of Northampton but I can safely say that I have definitely got my money's worth out of the WotR armies!  Despite the large number of WotR games we've played I haven't won a single game yet, but there's always 2021!!  We'll definitely be continuing with the sequence as soon as it's safe to carry on... Towton is next.

...and then we had more lockdowns and face to face gaming went on hold again...

November and December have, by necessity, been boardgames at home.  We tried Paths of Glory, the grand strategy WW1 game which was a mixed bag, more roleplaying and some more lightweight boardgames (Catan etc).  I struggled to get motivated to do any painting in the autumn but have now finished off more Ashigaru for my Japanese forces and a couple of cannons for the Wars of the Roses (which will no doubt blow up as soon as I try to use them|!)

So there we go... a lot more gaming than I'd remembered and a really wide range of periods and settings.  I'm lucky to have some really good gaming-buddies who have kept me going through the year.  Here's hoping we can get back together relatively soon in 2021 (vaccines-permitting).   I hope everyone has a great Hogmanay and that next year is a good one for you and yours!

Xmas holidays are always a good excuse to dig out some boardgames and catch up on painting.

I was given a sprue of Warlord Games Ashigaru figures which came with a recent issue of Wargames Illustrated and have finally got round to painting them up (I've finished the bases since taking these snaps).  They might even get an outing on the table over the next few days. 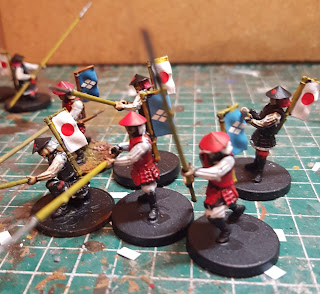 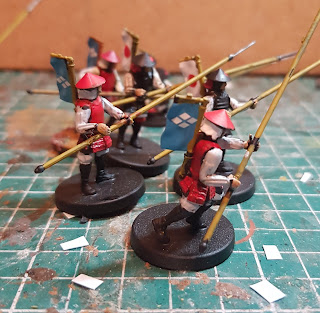 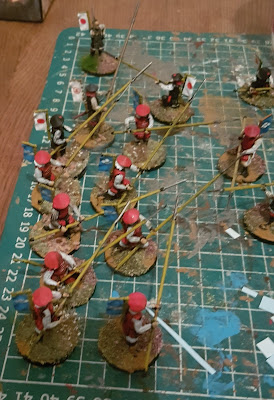 The Japanese theme has continued with the 1st game we've played... Tokaido. 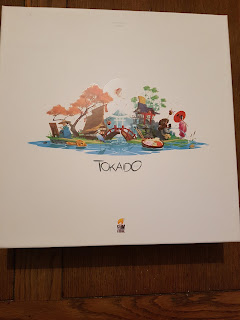 This is a lovely game with fantastic artwork.  It's also one of those games which is deceptively simple.  Players take the role of travellers going from Kyoto to Edo, stopping off at a series of inns on the way.  As you travel you can stop off at various places to a bit of shopping and eating (collecting and building sets of cards on the way).  You can also visit temples, farms and view panoramas all of which help build victory points.  It's very much about the journey rather than the destination.  Although the rules are very simple it does create interesting tactical choices about where to stop... do you block your opponent or get to your choice of stop before someone blocks you.  There are advantages to racing ahead to be first at each inn but then you'll miss out on the chance to collect points in other areas.  The game only takes about an hour so great for people who take a bit of convincing (like my wife). 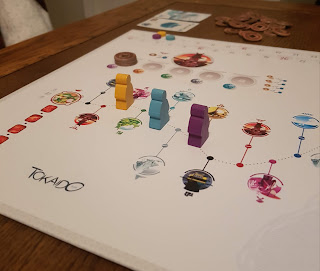 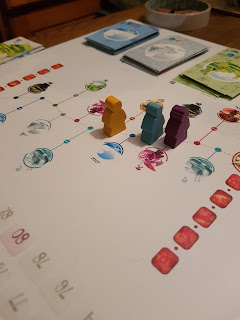 We also played a couple of regular games which everyone will be familiar with... Settlers of Catan and Carcassone.  Having come 2nd in Tokaido I was hoping for better things and somehow managed a win in Catan...unusual as my son usually thrashed me at this.  I was soundly beaten by my wife at Carcassone though via her ruthless management of monasteries. 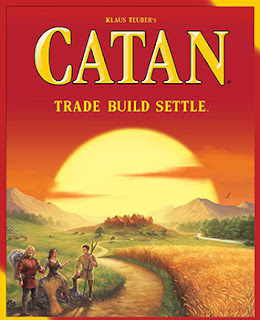 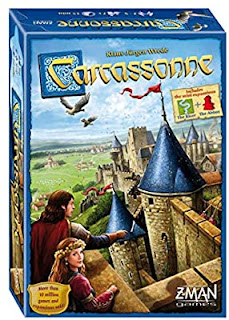 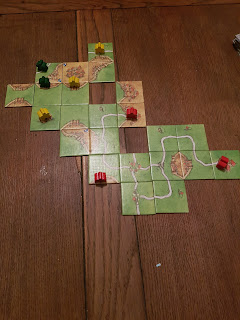 We were discussing getting some expansions for both of these but I'm not sure which to go for, so if anyone has any recommendations let me know.
We are planning a couple of other games before the holidays are over and it's back to work :(
The first is Guards, Guards which my son got for Xmas.  The Discworld games aren't always easy to track down as they are all out of print.  We've played Ankh-Morpork a lot so we're looking forward to giving this a try. 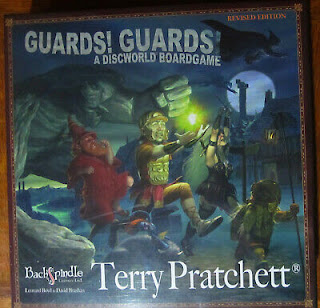 I've also dug out a copy of the GMT game Blackbeard. 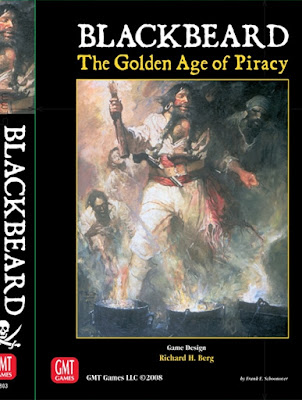 I picked up a cheap copy ages ago but it hasn't made it out of the box yet so we might give this a go, either as a 2 or 3 player game...more on this if we get round to it.

Like everyone we've had a very subdued Xmas this year.  Normally we'd be up in Glasgow but, for the 1st time in almost 20 years we've stayed home.  Actually it's been really nice...we've pottered about with the dogs, eaten what we liked (the Glasgow lot are all very fussy so we've been able to gorge on Xmas pudding, marzipan and no turkey without feeling guilty) and played an assortment of boardgames (I'll post about those separately)

Santa brought me a couple of gaming related things...

Firstly a copy of the Paperboys version of Little Wars with fantastic 54mm paper soldiers drawn as always by Peter Dennis.  The 'Red and Blue' armies included are effectively British and French but there is a download available for Prussian soldiers, so a 54mm Franco-Prussian game could be easily manageable.  Even better, the book includes some very impressive Martian Tripods for the soldiers to fight with their paper artillery. 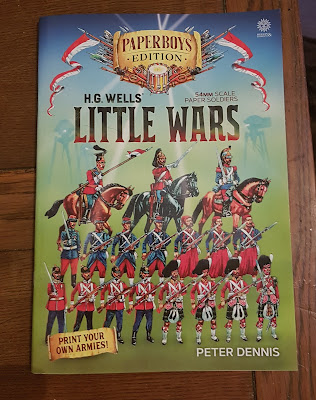 My other pressie was a set of Gripping Beast Dark Age Cavalry.  These are going to be the start of an Arthurian project.  I've always fancied doing this and remembered I have a load of Saxons (and Vikings) which I've used for Saga.  Technically these are Late rather than early Saxons and some purists may quibble but I reckon one hairy warrior looks much like another and they'll pass muster. 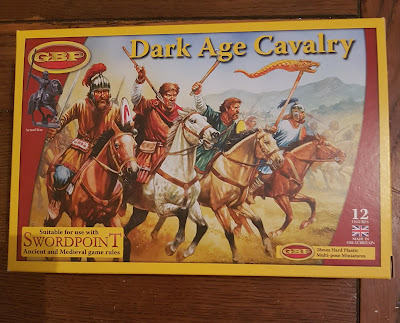 I hope you all got the toys you were hoping for and had a decent Xmas in the current circumstances. 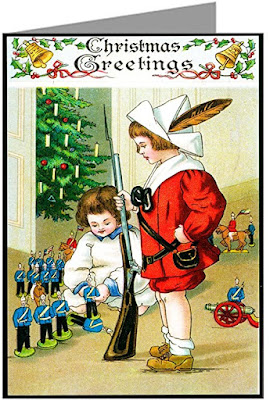 There has been a distinct lack of posts over the last few weeks as gaming has taken a lockdown/Tier 4 slump.  We did manage a couple of boardgames (one of which I'll post about later) but otherwise there has been an enforced lull.  I haven't even managed any painting for a bit.

Anyway, hopefully that will all be remedied relatively soon as vaccines begin to roll out although I suspect that will still take quite a while to take effect.

So while we wait I hope everyone has a great Xmas and you all get the toys you were asking for!