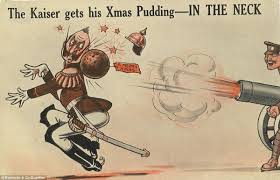 I've braved the after effects of the latest storm to hit the North of England (I think this one's called Eva) and trekked up the M6 to Glasgow for the holidays.

Actually the weather wasn't too bad,  which is probably a relief to the people in Cumbria, and the roads were very quiet...I guess everyone skived off earlier than I did this year!

Anyway...have a great Xmas and I hope you all get new toys to play with!

The Guildford club has a bit of a tradition (like a lot of clubs I suspect) of staging a Xmas Special in the last meeting before the break.  This has never never involved anything xmassy as far as I know but is usually a large, not very serious, multi-player game.  Over the last few years we've had numerous Cowboy shootouts and one year we had a mass Spanish Civil War tank battle with each player controlling a number of tanks and armoured cars (I know that doesn't sound even vaguely realistic but we were going for a tabletop version of World of Tanks!) 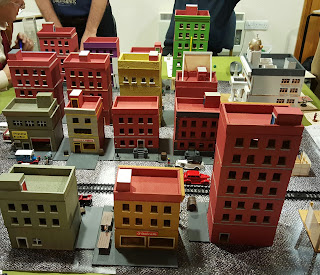 This year we were treated to a seasonal 1920's Gangster shootout instead, courtesy of Mike of Black Hat Miniatures fame.  4 teams of Gangsters all converged on an arriving train to meet/rob/escort one of the passengers.  In typical style the game descended into a bloody mess pretty quickly with hijacked cars crashing into each other and running over the odd pedestrian. 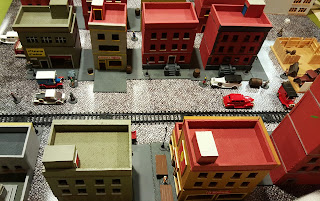 One of my characters (we generally had 2 each on the assumption that they wouldn't last long) discovered some dynamite in a builders yard and failed to blow up any of the opposition but did destroy the train's tender!  Unfortunately a team mate who was also laden with sticks of dynamite was then shot, setting off a chain reaction and devastating the builders yard!  Other highlights included one character getting stuck while trying to exit the car via the shot-out windscreen and spending several turns firmly wedged despite the aforementioned dynamite extravaganza going off next to him, and a character immediately dubbed 'Batman' for his highly successful tactic of ignoring guns and sticking to hitting people with his baseball bat. 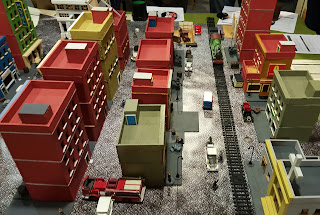 At the end of the evening somebody won (not the Italians...we were all dead) and we all had a great game.  The rules used were Howard Whitehouse's excellent 'Mad Dogs with Guns'

And since it's xmas here's an appropriately titled song combining Gangsters with Xmas (and a candidate for the best titled song ever!)...

This week we played through scenario number 2 from the Heroes of Normandie D Day.  The scenarios link into a 3 part campaign: we'd played number 1 a few weeks ago which was a US assault on an observation bunker which nearly succeeded but failed with the last move of the game.

This scenario ('Cut') involved the first wave ashore tasked with breaching the barbed wire defences with Combat Engineers and Bangalore torpedoes.  It looked like a very daunting scenario for the US especially when the German mortar arrived but thanks to the smart use of bonus moves by Anthony playing the US engineers,  they were able to breach the 6 barbed wire hexes needed and claim the victory...bugger!  This means that in the final scenario...cheerily titled 'Bloodbath'...the barbed wire will be cleared but at least I'll have the use of artillery as a result of winning round 1.

I know I keep saying this but HoN  really is a great game.  I really like the mini-campaign idea which makes the results of each scenario a bit more important.   There's a Kickstarter currently running for HoN which will put together a compendium of rules and info as well as some new terrain packs and storage boxes etc.  The good news is it offers a really good deal but the bad news is it won't deliver till September 16!  Needless to say I signed up.  The Kickstarter only has 3 days left to run and can be found here
Posted by alastair at 23:24 1 comment:

Yet another addition to the Frostgrave pile! (...because the pile of unpainted stuff just wasn't big enough...)


I saw on Facebook that Annie at Bad Squiddo Games had some sets of the Frostgrave Spell Cards which looked like a useful addition to the game.  I'd meant to order these as part of the Nickstarter deal recently but forgot to add them.


Although they aren't really necessary I think they might save some flipping through the rule book checking on spell effects at crucial moments.  I also picked up a Summoner and Apprentice set, just because.....


This week saw a rescheduled game down at the club following yet another family emergency (this year seems to have been full of them and this one was particularly crap).

I'd arranged a game with Andrew using the Coastal Forces collection I'd bought at SELWG in October and dug out my copy of David Manley's excellent Action Stations rules.  These are a favourite ruleset which given their relative thin-ness are full of great ideas and rules for scenarios ranging from Convoy escorting to submarine actions, rescuing downed pilots, Q-Ships etc...even including ideas for a  St Nazaire type attack.  They are relatively simple and provide a great game with small petrol and ammo-laden boats zipping around at 30 knots in the dark, dodging flares and (hopefully) avoiding collisions.  It reminds me a lot of a naval version of X-Wing!


I'd put together a convoy escort scenario set somewhere in the Med with a German freighter being escorted by a couple of S Boats, an R Boat and a Vorposternboot (armed trawler)...I always find balancing these kind of games tricky and so added a Siebel Ferry for the Germans at the last minute.  The British had 4 Fairmiles, 2 MTBs and 2 MGBs with the objective of sinking the freighter and getting away intact.

The RN cunningly split their attack, circling round an island and coming at the Freighter from 2 directions.  The S Boats engaged one pair and following a few rounds of largely ineffective fire we both managed to shoot up each others engines, leaving the normally speedy attack boats limping around and trying to repair the engines.  An MGB and a S boat ended up drifting alongside each other both on fire and full of holes while the other MTB managed to get into an attack position on the freighter despite being under heavy fire.

The other pair of RN boats had managed to zip past the VP Boat without taking much damage and were also in a position to launch torpedoes although in this case from the rear.  Andrew's splitting of the attacks meant whichever way I turned I would face some hit side on and the freighter went down in a flurry of torpedo hits.  By the end of the game the RN had lost 2 boats out of 4 and the Kriegsmarine had also lost 2 small boats but also crucially the freighter giving the Brits the win.

Email ThisBlogThis!Share to TwitterShare to FacebookShare to Pinterest
Labels: Naval, WW2
Newer Posts Older Posts Home
Subscribe to: Posts (Atom)
"At the age of four with paper hats and wooden swords we're all Generals. Only some of us never grow out of it."