Like lots of other bloggers I've made it back in one piece from Salute armed with a huge pile of loot....

...erm...that's it.  A magazine and a pack of Post-Apocalypse 'Ruin Raiders' from Lead Adventure Miniatures (and very nice they are too).  I'd planned on sticking to a minimum this year and actually managed it although temptation did rear it's head occasionally.  I nearly succumbed to the Retro Raygun figures from Hydra Miniatures again... I nearly bought some earlier this year at Cavalier...but resisted for now.  To be honest when I'd been thinking beforehand about what I might want to buy I really couldn't think of anything that I need/want...I think I might be going down with something!!

This year I arrived at around 10.30am and, having pre-booked my ticket pretty much sauntered through to the hall...there was a queue but it moved really fast and I could only have been there for a couple of minutes before getting in.  The hall was larger than in previous years which meant there was more space and generally it was really easy to look at games and trade stands, although a couple of stands were a bit of a bottleneck (Troll Traders and Wayland Games to name 2).

I thought the hall seemed busy though with a real mix of people...young, old, families etc.  Across the concourse at ExCel a Sherlock Convention was going on so the Geek levels were high!  The demographics for Sherlock seemed very different to Salute...mainly young and female from what I could see while queuing for my Salt Beef Bagel at lunchtime.  I always wonder what the Marathon runners registering elsewhere in ExCel make of us all!

As usual the range of games was really varied and almost entirely of a scarily high standard.  It was also nice to see lots of games making a real effort to engage with the punters, either by having handouts and posters or...gasp...talking to us.  There were also quite a few companies trading that I'd never heard of before.  At some shows recently it's felt a bit 'samey' with the usual faces but there was real diversity on show.  There was a huge queue snaking through part of the hall which baffled me for a while but it turned out to be people lining up to get to the Forgeworld stand...I asked one of the Warlords volunteers who was gamely trying to keep non-queuers away and he seemed equally puzzled.

I have to say, despite not buying very much I really enjoyed Salute this year, more than in previous years and I think this is entirely down to meeting up with lots of people that I knew...I met up with assorted bloggers at the annual meeting at 1pm and with a few people from the Guildford Club.  I also managed to catch up with 2 old friends from Uni days which was really nice.


And now the photos....I didn't take quite as many as I'd thought (too busy talking to people) and as usual I can't remember  what half of them are or who put them on so apologies to everyone if I omit the details or get them wrong!  Suffice to say they were all really impressive...

Lastly here's a photo of the protestors who can be found outside ExCel every time I've been to Salute... not protesting about Salute I hasten to add but about the dodgy Arms Fairs that are held there (I guess one must be scheduled not long after Salute).  Lovely bunch... I had a chat with them this year and the drummer was very interested in Salute and what we did.  As a died in the wool lefty I have always been very impressed by this lot and the fact that they played a rousing version of Bandiera Rossa added to the fun! 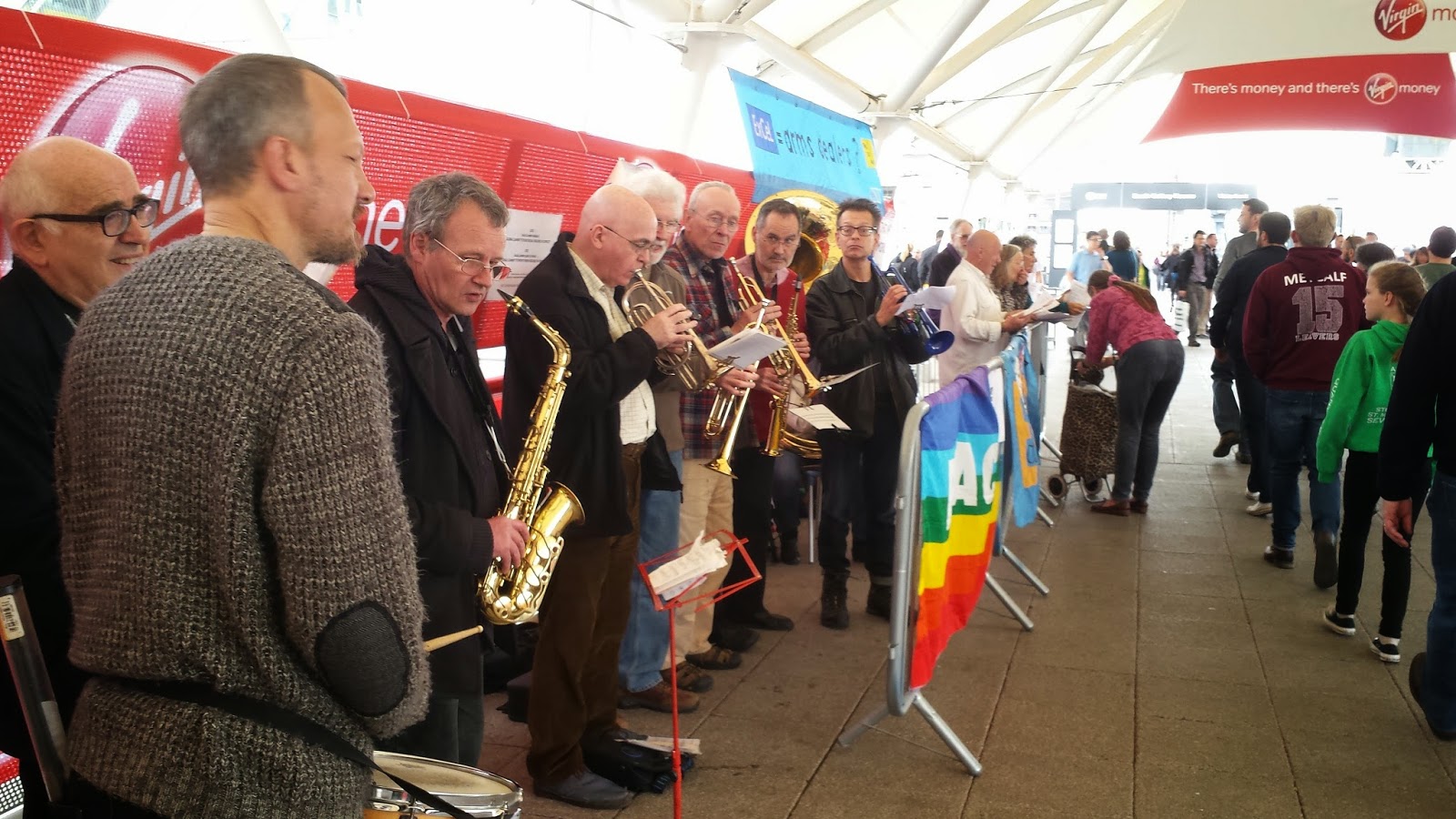 Email ThisBlogThis!Share to TwitterShare to FacebookShare to Pinterest
Labels: Salute, shows
Newer Posts Older Posts Home
Subscribe to: Posts (Atom)
"At the age of four with paper hats and wooden swords we're all Generals. Only some of us never grow out of it."