The Scales of Anubis #2


Down at Eric's Shed we played out the 2nd part of his excellent Pulp campaign this week. A full report can be found here which gives a feel for the level of background research and planning that Eric has put into this, as well as the fantastic terrain and setting.

Following the last episode set in Egypt, the action moved to South/Central America with a huge Meso-American temple dominating one end of the table and a village complete with church and cantina at the other.  A full account of the action can be found at the Shed Wars blog but sadly once again the all-American hero leading the CIA bit the dust and we'll need to come up with another suitable name...we're running out of US states to name him after in true Indiana Jones style!  As before the game went down to the wire with a 3 way brawl to seize the next piece of treasure at the climax of the evening.

Here are a few photos showing some of the fantastic terrain. 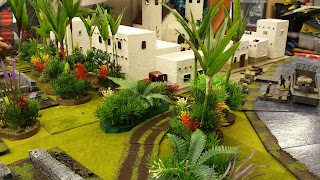 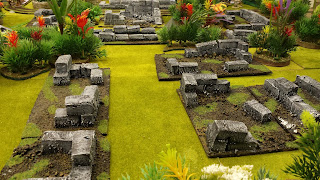 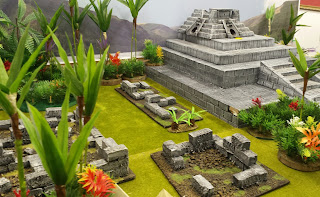 This week started off with a bit of a disaster... twice!  Since I was taking part in the fantastic Pulp campaign laid on by Eric the Shed I had ventured up into the loft to look out some figures for my faction (and to look out a suitcase for my son who is now away for a week on tour in Berlin).  Of course the box I needed was at the bottom of the pile so I had to rearrange the stack of box files and Really Useful boxes and while I was rummaging through my Back of Beyond figures I heard a sickening crash from the top landing as a boxful of 28mm Vikings and Saxons slid out of the loft hatch, hit the landing and bounced all the way downstairs!!
My son sprang into action and helpfully rounded up the figures which were now strewn all over the stairs and bedrooms.  Once he'd decided it was safe for me to come down without standing on them I descended and viewed the carnage...actually it wasn't too bad...a few swords broken off and one figure snapped off at the ankles but all looked fairly repairable. Thank goodness for plastics!!  The worst damage was to a resin pigsty which had a few bits broken off and one bit of fence damaged but again this looked not too bad.
I boxed everything back up and made my way back up the ladder...just as I got to the hatch the box slipped from my fingers and, in slow motion, repeated the spectacular bounce of doom!!!  I ended up chucking everything back in the box and into the loft before any more disasters occurred.  When I'm feeling brave enough I'll risk peeking inside the box.
So onto the Pulpy goodness at the Shed.  The background can be found here.  Eric's tables are normally pretty spectacular but this one really surpassed past efforts...my photos don't really do it justice and I'm sure there will be more photos on Eric's blog.

I was one of 5 factions trying to find part of mystical Egyptian artifacts....suffice to say it didn't go well!  Kansas Jack, leader of the Chicago Institute of Antiquities (CIA) was sandwiched between a rather militant Vatican faction and some evil Nazis (boo!) and definitely came off badly.  Oh well...perhaps I can redeem myself in the next episode!


The 2 big Star wars games of recent months have been Imperial Assault and Armada...I'd been keen to try both for some time and have managed to squeeze in a game of each in the last 2 or 3 weeks.

I played one game of Imperial Assault and have now picked up a set from a friend so will post something more detailed about this in a later post, once I've had a chance to get my head round the rules and the enormous amount of stuff that comes with it. 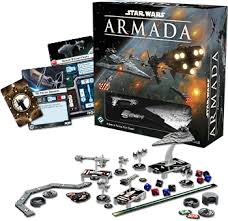 We played Armada earlier this week, with Andrew's basic set plus additional ships.  If you've played X Wing there is a lot that's familiar in this game...and a lot that's very different.  Our game pitched 2 Imperial Destroyers against 3 Rebel ships, with Darth Vader taking to his TIE fighter for the good guys and Luke leading the wave of Rebel fighters.

If X Wing is a WW2 air game in space then Armada is very much a naval fleet action with slow powerful Capital ships being swarmed by tiny fighter squadrons as they manoeuvre towards each other. The similarities with X Wing (to me anyway) lie in the force building with characters, special weapons etc. being added to existing ships.  The combat mechanisms are similar too with special dice symbols counteracting each other and a series of hits and/or criticals resulting. 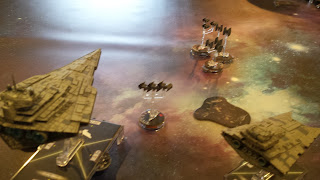 The new features that I picked up on (bearing in mind this was the first game) were the pre-plotting of orders for the Ships: my destroyers had to plan 2 and 3 turns ahead respectively...not helped by the fact that I kept forgetting what I'd ordered!  Squadrons can move or fire unless they have been given a specific order by their capital ship, in which case they can do both, which leads to some juggling of priorities as the squadrons engage.  Movement for the bigger ships is regulated by their speed and a nifty clicky turn device which is used to plot movement.  The quality of all the components was very impressive, from the turn device to the bases for ships with individual dials for each shield.  The ships themselves are very nicely done and the small squadrons of fighters and bombers look great next to the ponderous Destroyers.

Inevitably we got lots of things wrong, most notably Destroyers engaging fighters and the fact that fighter squadrons can pin other squadrons, preventing them from shooting up the larger ships until they've dealt with the escorts.  We're planning another game in a few weeks so hopefully we'll both have got our heads round the rules properly...incidentally FFG make their rules available for free which is a nice touch and gives both players a chance to prepare ( or it would have if I'd got round to doing more than giving them a quick skim)...they can be found here

Posted by alastair at 21:18 No comments:

Email ThisBlogThis!Share to TwitterShare to FacebookShare to Pinterest
Labels: Star Wars
Newer Posts Older Posts Home
Subscribe to: Posts (Atom)
"At the age of four with paper hats and wooden swords we're all Generals. Only some of us never grow out of it."