This afternoon I found myself haunting the streets of Epsom, rattling a tin on behalf of a local dog charity.

We have 2 rescue dogs which came from Celia Cross Greyhound Trust, and occasionally I get roped into street collections to raise funds for them.  They tend to be an interesting experience and I often end up bumping into someone I know...in this case somebody I worked with 15 years ago and it looks like a reunion lunch date with some other ex-colleagues may well be on the cards.

I popped into WH Smiths to pick up the latest issue of Miniature Wargames... no longer with Battlegames. I'm old enough to remember picking up issue #1 of MW although admittedly I was at school at the time: under various editorship it has been great/terrible/mediocre at times. 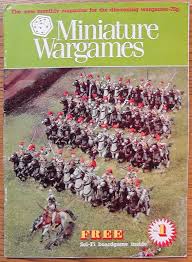 I haven't really kept up with all the ins and outs of recent events but it seems that Henry Hyde, most recently editor of Battlegames and then the combined title,  has been ousted/resigned and the editorship has fallen to John Treadaway...in my head I like to think there was some kind of Game of Thrones style power struggle going on which was settled by a bloody editorial skirmish but I suspect it was all disappointingly mundane.

Already in various forums (I know it should be fora but that sounds weird) the usual comments of "I'm never buying another issue" etc have begun to appear.  The fact that the publishers have decided to add a 16 page Fantasy and Sci-Fi section in the middle has also sealed it's fate in some people's eyes,  despite the fact that this appears to be in addition to the normal page count.  What's more interesting is what this means for Tabletop Gaming magazine which comes from the same publisher.  I've liked TTG since it first appeared (although I thought the last issue was a bit flat) but it does seem to be too close a match with the 16 page supplement...will they both be able to survive??

So what's the first issue like?  There's definitely been some tinkering with the layout and at first glance it seems like there's still a bit of work to do before they settle on a new House Style.  Different articles use different fonts, some have 2 columns to a page while others have 3 etc.  None of this is a particular problem but it does make it look a little disjointed.  There are some columns which have survived the putsch such as Conrad Kinch's excellent 'Send Three and Fourpence' and (for me at least) the less interesting 'Wargamers Widow' terrain building regular... it's never held much interest for me but that's mainly because I know I'm rubbish at scratchbuilding stuff.  The contents (bearing in mind I haven't actually read them properly yet) are...

So not a huge difference from the last few issues which isn't really a great surprise and definitely some interesting stuff in there.  A few regulars have carried on contributing but I don't know whether that's because there were articles already 'in the can' or if they will continue and the general tone seems similar so far.  They have obviously been tinkering with layout and design but don't seem to have worked out what they want yet.  Certainly there's nothing for the naysayers to be worried about on first glance.  I would imagine things will begin to change over the next few issues as the new editor and the publishers begin to make the changes that they want and it'll be interesting to see what happens with the Critical Hits section and the future of Tabletop Gaming.

What is best in life?

Way back in Feb 15 Monolith games' kickstarter for Conan was funded with an expected arrival date of October 15.  It was my first Kickstarter but even so it was pretty obvious that, because of the hugely successful campaign for funding and the never ending stream of Stretch goals, it would take a bit longer.  So, a year later it has finally arrived....and there's a lot of it. 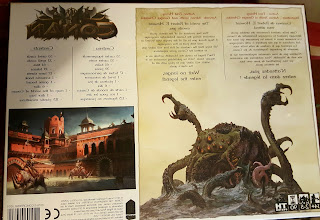 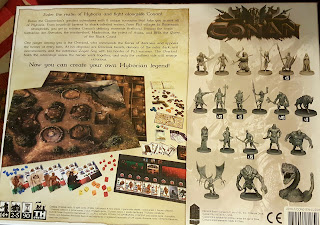 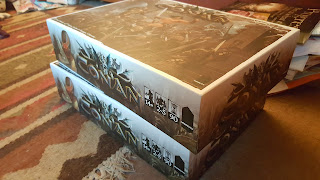 I went with the Barbarian level pledge which was the 'standard' level.  Today a huge box containing the game arrived,  along with another large box just for the extras.   So far I've just peaked inside but what I've seen looks excellent.  More to follow when I get a chance to go through both boxes....
Posted by alastair at 19:04 8 comments:

Email ThisBlogThis!Share to TwitterShare to FacebookShare to Pinterest
Labels: Boardgames, Conan
Newer Posts Older Posts Home
Subscribe to: Posts (Atom)
"At the age of four with paper hats and wooden swords we're all Generals. Only some of us never grow out of it."