The good people at Osprey and author Joe McCullough have put up another great freebie offer to cheer us up in the current crises.  You can download a copy of Frostgrave, the fantasy skirmish rules, the supplement Dark Alchemy and the first section of another supplement Perilous Dark completely free!  Perilous Dark contains 3 solo scenarios so definitely what we all need at the moment.  The downloads can be ordered from the Osprey store and use the code FGV2020 to get the discount

Joe has posted about it on his blog...  http://therenaissancetroll.blogspot.com/2020/03/frostgrave-is-free.html

What a generous offer, on top of the free book deal Osprey are already running.
Posted by alastair at 15:07 No comments:

Lockdown and an Osprey freebie

Well, if the last few weeks haven't been strange enough, the UK is now is in (almost) complete lockdown.  It's quite incredible how quickly the tone has changed and we find ourselves queuing (with sensible spacing) outside the supermarket in the hope of finding some supplies.

I'm pretty fortunate in that I already work from home and my job has continued with only a few changes.  I know several people who have lost hours at work or are now potentially facing a long spell with no income at all.  The UK government have committed to meeting 80% of salaries so it's not all bleak but no one really knows how this will pan out.  The general impact on our day to day life isn't really too disruptive compared with most people so 'musn't grumble' (not yet at least, although there are mutterings at work that things may change and hours might be reduced).

Regular gaming had, very sensibly, pretty much stopped everywhere before the lockdown so it has given me more time to paint and work through the Wars of the Roses retinue I've been painting.  I can already sense my attention beginning to wander though (I'm so fickle...) and so I may need to find some other stuff to paint as well.  Like most people that shouldn't be a problem as the loft is full of unfinished projects.  Who am I kidding!?  Most of them haven't even been started!  So there are plenty of things to work on.  Of course this means I might lose my focus on the WotR figures. I'm now up to 80 figures completed with another 24 almost done... it's been a long time since I've produced so many figures in such a short space.

To fill in the gaming vacuum a friend has kindly resurrected a Space based campaign which he has run in the past...a mix of galactic empires building up fleets and exploring the universe before bloodily stabbing each other in the back!  (back to the Wars of the Roses again!).  This all done via email so no risk of contagion.  This was great fun last time it had an outing so it promises lots of fun...in the last game I did quite well despite not having a clue what was going on!  I'm also looking at playing some games on Vassal with a friend (or maybe Tabletop Simulator)...haven't used this before but it looks relatively straightforward.

One bit of good news is that Osprey are running a really generous offer where they are making 5 titles a week available for free over the next 4 weeks... have a look here .  I've just downloaded 3 of the titles from the 1st week... US Marine vs Japanese Infantryman, Blackbeard and The Martini Henry Rifle.  Can't really say no when it's free!!

I hope everyone is keeping safe and well and that we all get through the next spell unscathed!

My improvement in my painting output seems to be holding out as I have been busily working through the boxes of Perry Wars of the Roses figures that have emerged from the loft.  I find it easier to work in smaller sized units as I feel like I'm making progress when I finish one and so 12 man Lion Rampant sized units are ideal.

So far I have units of bowmen, billmen, foot knights and handgunners as well as a few standard bearers.  All foot units so far... I'm not a fan of painting horses but I'll have to bite the bullet at some point and get some knights and light horse sorted out.

The handgunners and a unit of crossbowmen, who are assembled but unpainted, are going to be European mercenaries... the crossbowmen will have to be Burgundian or Flemish to match the card from the Kingmaker boardgame.  The mercenaries box also has some spearmen who will either become French footsoldiers, again to fit in with the Kingmaker theme, or be converted into more billmen.

The completed figures so far... 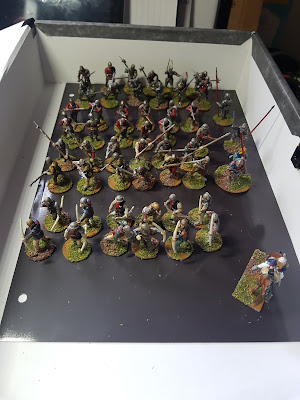 Some assembled but unpainted standard bearers and drummers (from the European mercenaries box).  I have some very nice flags from Pete's Flags to go with them once they are all done. 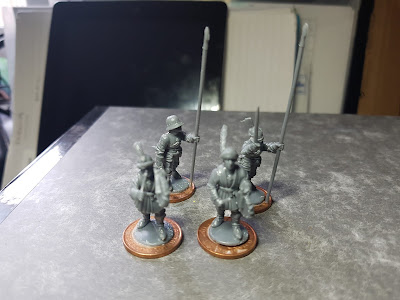 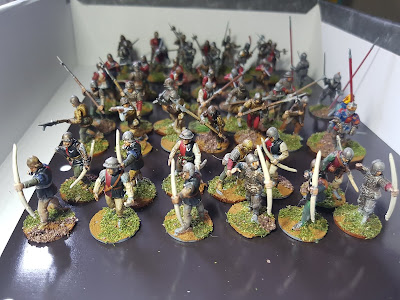 Every army needs a King... 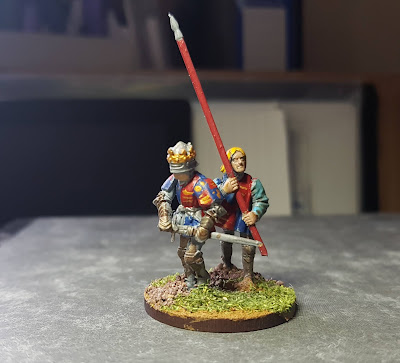 How did he get in here??  He must have escaped from my AWI boxes which were out last week! 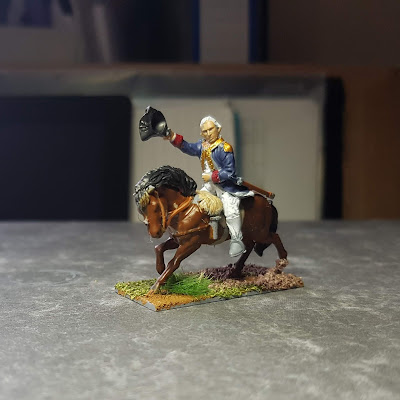 Email ThisBlogThis!Share to TwitterShare to FacebookShare to Pinterest
Labels: painting, Wars of the Roses


A first outing this week for my AWI troops.  I've been working on these for a little while now and had a mix of regulars and militia ready but, thanks to a last minute eBay bargain and some very last minute painting, I was able add some Natives to the British forces and equip the rebels with a  cannon.

My plan for these was to use Rebels and Patriots as a ruleset.  These are another of the generally excellent Osprey blue books and follow the Lion Rampant model.  They are designed for games in the North American theatre from the French Indian Wars through to the ACW but could easily be used in other settings...they'd certainly be very suitable for Napoleonic games.

The game uses an IGOUGO model.   Each turn units need to pass an activation roll to complete an Action (move, fire, charge, rally, skirmish etc) but unlike Lion Rampant failing the roll doesn't mean your turn is over, and all units get a chance to try and do something each turn.

Units generally need to roll a 6 on 2d6 to succeed with an action.  The odds can be improved by having your leader within 12" or by being in Close Order.  I really ought to have remembered that...

We decided to play out the 1st scenario in the book which is a straightforward tussle to take command of a hill in the centre of the table. 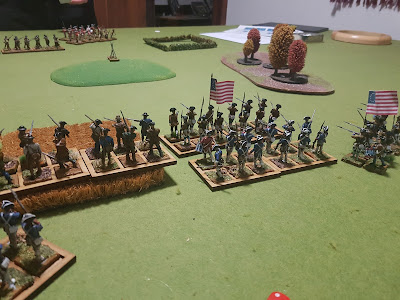 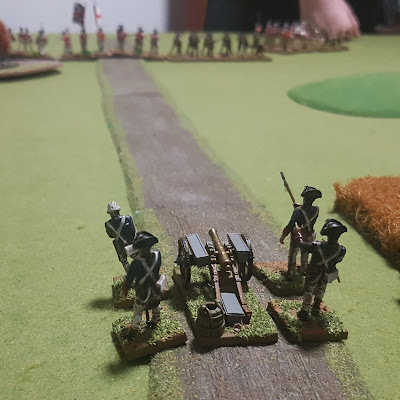 My commander lead from the front, heading towards the hill with the leading company of the 2nd New York regiment. Andrew sensibly kept his commander in a supporting unit which meant he wasn't exposed to fire.  The 2nd NY came under fire from the Indians in the woods and a unit of skirmishers who kept popping out from behind the hill to take very effective pot shots. Having taken casualties I had to pass a morale test, which I failed.  And in the next turn I had to take another one...which I failed badly.  As I now had too many disorder markers as a result of the failed tests, the company decided to rout, taking the commander with it! 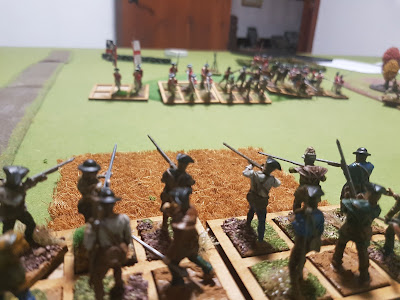 This set a pattern for the rest of the game with poor activation rolls on both sides and some really bad morale rolls on my part.  Had I thought to get my units into close order (or at least passed the activation rolls to get them there) and not lost my commander I might have had a chance but as it was Andrew's more aggressive approach meant he had seized the hill and my units were rapidly melting away, giving him the victory.


I was lucky enough to have a second chance to try out the game a week or so later against another regular opponent Anthony.  I decided to stick to the same scenario and forces and see if I could improve on my shoddy performance.

Again my troops bravely marched towards the hill in the centre of the table... 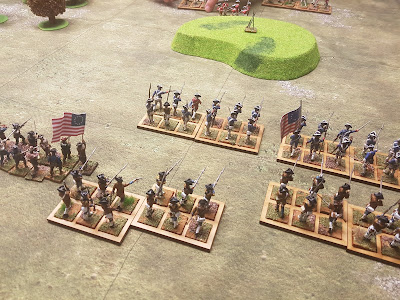 We looked set for a major tussle in the centre of the field but then Anthony was able to combine fire from a couple of units on one of the Continentals which was pretty devastating.  This is something I should have learned from the 1st game: as the casualties begin to mount and units also acquire disorder markers it can quickly become very tricky to stop them routing 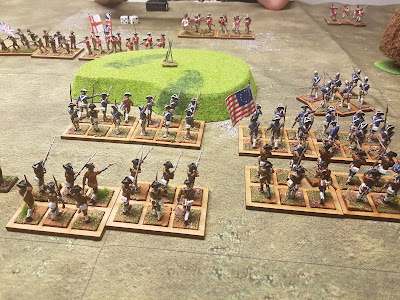 Neither of us was keen to commit to taking the hill...we both realised that whoever was brave or foolish enough to get to the top first would be blown away by the waiting units on the other side so the fight developed on either flank

On my right flank I managed to shoot up the Natives with my skirmishers and drive them back and out of the game (or so I thought...).  My own skirmishers were driven back in response but I was hopeful of holding off the enenmy on this side of the army. 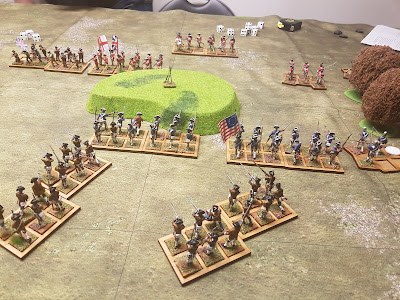 On my left the artillery was doing a sterling job of holding back the approaching Light Infantry who had cunningly advanced through the woods but casualties were beginning to mount on my infantry on this flank. The British had a unit of Loyalist Militia who had been upgraded to 'Good Shots' giving them a +1 to hit.  As units normally hit on a 5 or 6 this makes quite a difference and my Green Militia that were opposing them weren't impressed! 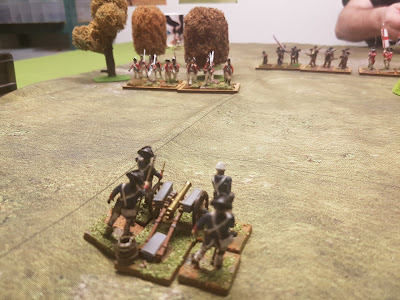 Back on the left the Natives had somehow reformed and regained their nerve and, having sneaked through the woods, suddenly charged my Skirmishers, wiping them out completely in a single round of combat and then swung onto the flank of one of my Line Infantry units routing it in turn (Natives are allowed to do that sort of thing!). 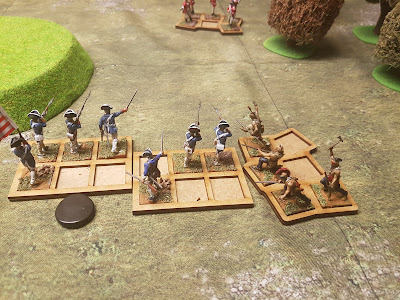 At this point discretion seemed the better part of valour and the Americans decided that the British could keep the hill after all.


So, despite managing to learn nothing from my first defeat and crashing out twice in a row, how were the rules?  Like most of the Osprey rules these are excellent value and a really simple but effective ruleset for the period (or periods in this case as they cover such a broad timespan).  It would be easy enough to adapt them for other settings or to add in house rules to suit your own local gaming groups preferences without unbalancing things and they are very quick and easy to pick up.

Now I just need to work out how to win...

Email ThisBlogThis!Share to TwitterShare to FacebookShare to Pinterest
Labels: AWI, Osprey, Rebels and Patriots
Newer Posts Older Posts Home
Subscribe to: Posts (Atom)
"At the age of four with paper hats and wooden swords we're all Generals. Only some of us never grow out of it."