A blast from the past....Raid on St. Nazaire

This week in a change to our scheduled programme  played a game of Raid on St Nazaire... an old Avalon Hill boardgame which first came out in 1987.  It's one of those games that I always used to see in games shops (in the days when we had games shops) but never actually played.  We had been due to play a AWI boardgame but as Andrew had just acquired this and was keen to give it a go we changed plans. 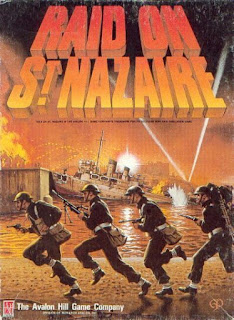 RoSN is a solitaire game but it works quite well with 2 with the German player rolling a lot dice to determine the effects of gunfire and being in charge of the arriving German reinforcements.

The game is a very typical AH 80's style game...lots of hard to decipher counters ( the colour scheme on the commandos is especially hard to read) and charts to roll on.  There's a chart for just about everything!  The board itself is very pretty with counters moving from area to area denoted by movement lines on the map. 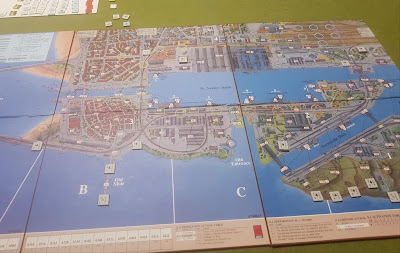 The British boats and commandos arrive in the 1st turn and have to weather a lot of gunfire on the way in.  It can be quite a demoralising experience as there is very little that you can do in response.  I was lucky in that most of my casualties in these turns were comparatively light:  most of the boats were slowed down and my approach had to be staggered over a couple of turns but at least only a couple of boats were actually sunk at this stage. 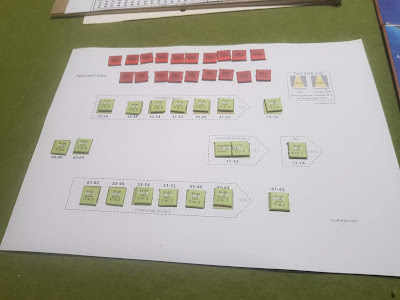 By the end of turn 1 we had reached the Old Mole and were drawing a lot of gunfire.  One of my MTBs was able to sink an outlying German minesweeper which at least reduced some of the attacks but the combination of searchlights and guns was beginning to tell. 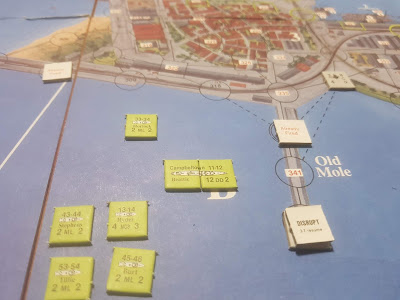 Luckily the Campbeltown wasn't slowed down and rammed the Normandie dock gates at full speed, off-loading her cargo of Commandos before being scuttled and destroying the gates (the commandos are the orange counters...Germans are grey and boats are green). 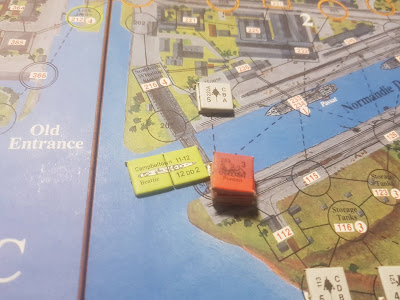 The commandos were then able to pour across into the town, attacking the Pump Station and Winding gear.  Some units have a specific target (which gives them a bonus to destroy it) but I managed to forget all about this until all my demolition teams were in the wrong places! 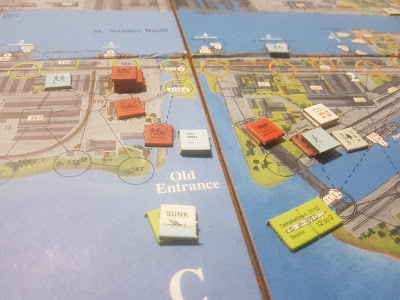 Because of the delays caused by enemy gunfire my 2nd wave arrived a couple of turns later and poured ashore at the Old Mole and headed for a 2nd set of lock  gates, fighting off Germans who had appeared in the town ahead of them.

The Germans arrive at random locations (determined by another table)...luckily most of them seemed to arrive in the very top right of the map which kept them a long way from the action for most of the game.  The few that did try taking on the commandos tended to come off worst (not surprisingly) 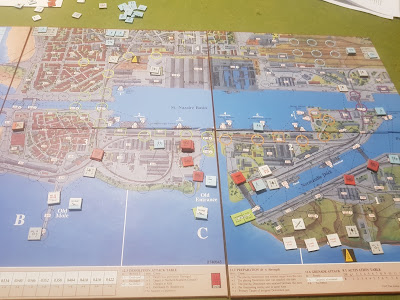 By the end of the evening I had managed to destroy or damage most of the objectives in the southern half of the map and the Campbeltown had wrecked the lock gates.  A lot of the surviving boats managed to make it out to sea safely (whether they made it back across the Channel is another story!).  This did leave the commandos to fight their way out of St Nazaire. 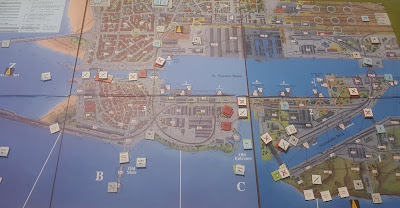 The game was great fun and certainly gives a flavour of the huge task that faced the attackers.  In reality out of the 611 men who took part in the raid, only 228 made it back safely to Britain.  169 were killed and 215 became POWs.  5 somehow managed to make it to Spain with the help of the French Resistance.  Many of the boats were destroyed before they could get away.  89 decorations were awarded to the raiders including 5 VCs.  German casualties included over 360 dead.

Excellent fun and a game system that has aged surprisingly well.  I did find I needed this essential bit of kit to read some of the counters though!!!  I could blame the small counters and the colour schemes but I suspect my aging eyes might have something to do with it... 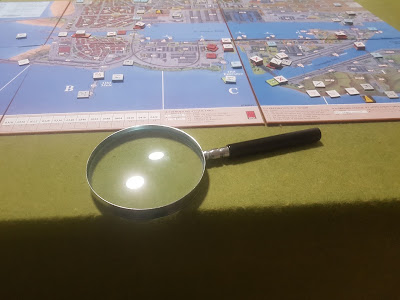 
A couple of weeks ago we fought the latest of the Jacobite Wars games using the Paper Soldiers armies...as we've fought Falkirk a couple of  times now, using Black Powder and the rules that come with the army books, we decided a change of scenery was called for and relocated the action north to Culloden.

I've been to Culloden a couple of times, most recently back in 2013, and even today it's a fairly bleak place... 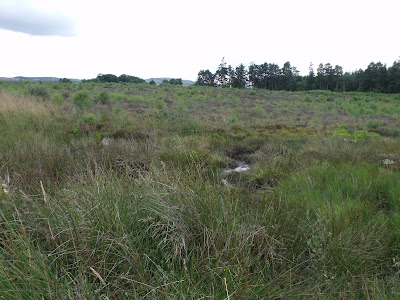 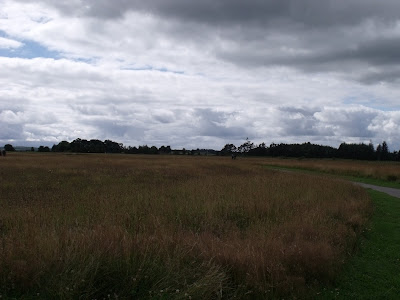 I'd written about this at the time and the post is here.  In the post I talked about gaming this period,,,nice to have finally done it even if it took me 6 years to get round to it!

We returned to Black Powder for this game.  The battle starts with the Jacobite lines at an angle to the Government troops and with some extra boggy ground in the way on the left flank. 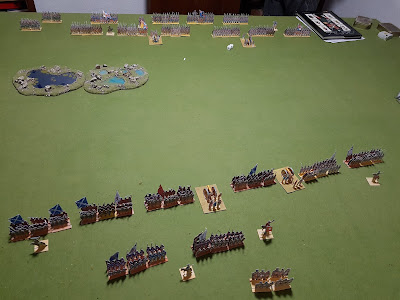 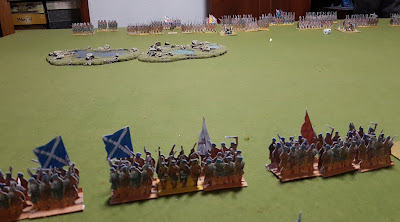 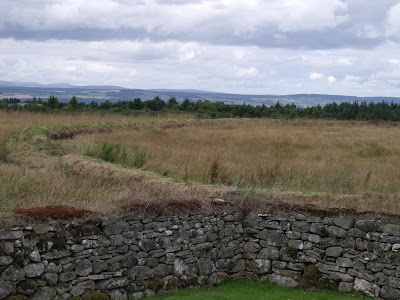 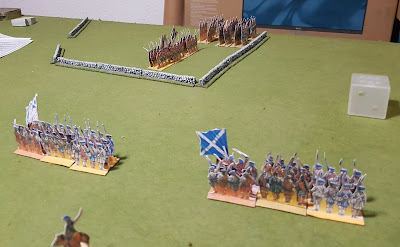 I attempted to block this off by swinging the end of  my line round to face them and marching the French troops up to support.  As usual in Black Powder the game was full of brigades refusing to advance and the occasional blunder.

I tried pushing the left flank forward over the boggy ground which they eventually managed but it took several turns to get there. 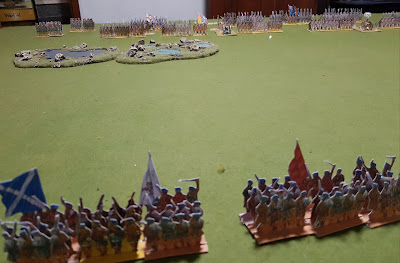 I'd expected the Government troops to hold back and wait for the Highlanders to come to them but my opponent Andrew was having none of it and steadily advanced to me instead. Over on the right flank the Govt Horse and Militia made short work of the Jacobite and French troops facing them and I was suddenly opened up to a flank attack.

In the middle it was going a bit better... some of the attacking Jacobite had managed to break through the government lines but the battle in the bog on the left was going badly and the whole battle became very fragmented...not the neat charging battlelines I'd hoped for!

As both flanks caved in I conceded the battle...when we counted up defeated units it was actually quite close but the government start with an advantage in numbers and I simply couldn't afford the losses I'd taken 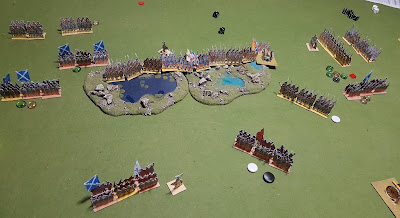 Great fun but I've still to see the Jacobites actually win a battle!


No posts for almost a month.  No excuses I'm afraid, just work and real life getting in the way, including a week back home in Glasgow.  I did take part in an excellent Napoleonic game though, courtesy of Eric the Shed; all the details are here....link.

To be fair my stunning success in this game was more due to luck than anything else.  As usual in Black Powder games my Brigade set refusing to move for several turns before making a charge across the table when I was a bit vague specifying their orders.  In this case it left my French columns sitting in front of the British lines who failed to cause many casualties.  I then charged home and they all ran away!  I'd like to think this was down to my tactical genius but some very lucky dice throwing saved me again!

I have finally gotten round to prepping the figures I bought at Salute last month.  These are figures from Oathsworn Miniatures Burrows and Badgers range and Northumbrian Tin Soldiers Guardians of the Riverbank set.  So far they've been undercoated and then given a light grey and white highlight spray 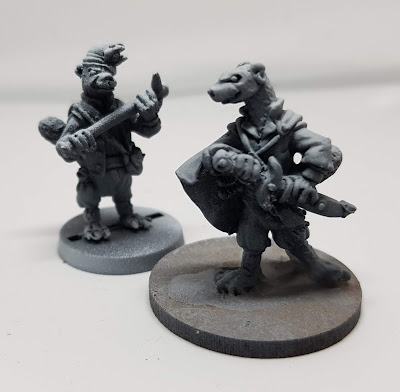 I've always been a Wind in the Willows fan ( the 1996 film in well worth checking out) and like the Burrows and Badgers setting so I finally gave in and bought some of these.  I have to confess to being a bit intimidated about painting them as some of the examples on Facebook etc are really excellently painted but now they are undercoated and prepped I don't have an excuse!

In the pipeline this week are games of Terraforming Mars and another Black Powder Jacobite game with my paper soldiers.
Posted by alastair at 20:26 1 comment:

Email ThisBlogThis!Share to TwitterShare to FacebookShare to Pinterest
Labels: Burrows & Badgers, painting
Newer Posts Older Posts Home
Subscribe to: Posts (Atom)
"At the age of four with paper hats and wooden swords we're all Generals. Only some of us never grow out of it."