Fire up the Crossley!


And now the Armed Miners have gone mobile!  I picked up the Coal Lorry ( a Matchbox Models of Yesteryear Crossley) for a snip off Ebay and the seller very generously threw in the Liptons Tea Lorry for free!! 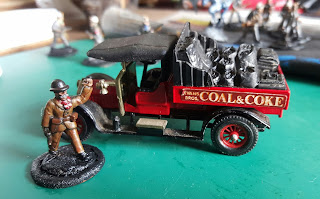 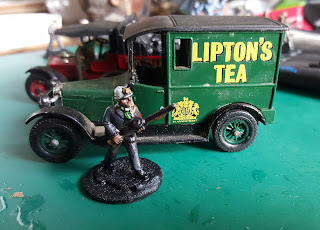 Some bits and pieces

There's been a bit of a lull in my blogging with nothing of note since Cavalier last month.  In the last few weeks I've played another game of Bolt Action VBCW at Eric's Shed which was great fun but little else.

At Cavalier I hummed and hawed about buying the very nice Ironclad Miniatures Armed Miners and eventually decided not to.  Of course as soon as I got home I immediately regretted that decision and ordered them online!  The whole VBCW setting has always been really appealing but I've always felt a bit daunted by collecting enough for a game. It doesn't seem to have made any impression at all at Guildford and although it does regularly crop up at the Shed (I've very lucky to have 2 excellent opportunities for regular gaming!!) there are always plenty of very nice figures there to play with so there's no incentive to get my arse into gear and get painting.

I had a bit of a revelation though after I ordered the Miners...maybe I don't need to worry about collecting enough for a game...maybe I should just buy and paint them because I want to!  That may seem fairly obvious to some of you but I've always tended to work to a plan and focus on building forces. For the VBCW I've decided to slowly (very slowly I suspect!) pull together some slightly random forces...not so random that they couldn't be fielded together, but not working to an army list or trying to get enough together for both sides of a game.

I think the VBCW setting works best when it's based around something local.  I could have gone with a local Surrey/London force but instead decided to go back to my roots, so the Miners will form the first part of a People's Lanarkshire Battalion!  I can already think of some more related units to field at some point.

The Miners still need their bases sorted and hopefully a Coal Lorry is on it's way from EBay to turn them into a motorised platoon.
I also recently bought a Demon-type thing for Frostgrave...this is a Gargoyle figure from the Reaper Bones range which looked suitable.... again, part of my new approach of buying stuff just because....
I've never really looked at these before and while the figures are very nice I was surprised how soft the plastic was...very nice to paint though.
﻿ 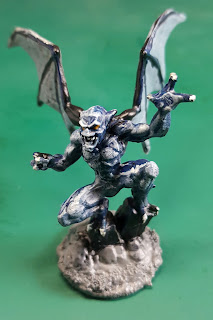 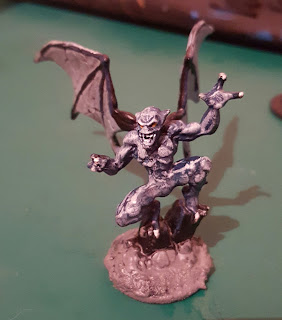 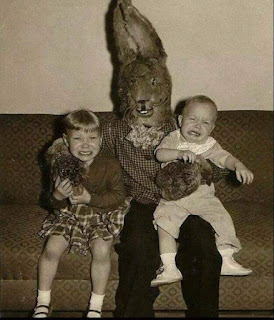