More games this week... nothing last week though as we were off in Glasgow for a very hectic week for the 1st time since Lockdown.

This weeks big game was a Napoleonic scrap at Eric The Shed's (I'm sure there will be a fuller write up there soon.  EDIT - Eric's write up has now been posted HERE ).  This 3 player game pitched 2 Allied forces against the French who were firmly entrenched in a small town.  The French positions were initially concealed with a few blanks thrown in to cause confusion.   I took command of the Portuguese, backed up with the 95th Rifles, while Glen led the rather superior British troops.  Eric had charge of the French (this was all decided by dice rolls at the start of the game)

My advance towards the town was pretty slow but steady but as we had a time limit this was a bit of a concern.  The town was well defended with redoubts manned by artilllery and some very effective troops who were very challenging to push out of the buildings.  The French did also have some poor militia troops but sensibly kept these out of the front line for as long as possible.

The British led a spectacular charge straight through the town which had the potential to be a game winner... unfortunately this led them under the barrels of the artillery who caused devastation.  But it almost worked...

There were 2 large scale fights for parts of the town, both of which were eventually won by the allies but there were still a lot of French to defend the rest of the buildings.  As our turn limit we fast approaching I threw my Portuguese straight at the main redoubt, defended by the Swiss and artillery in a glorious but not surprisingly doomed attack... 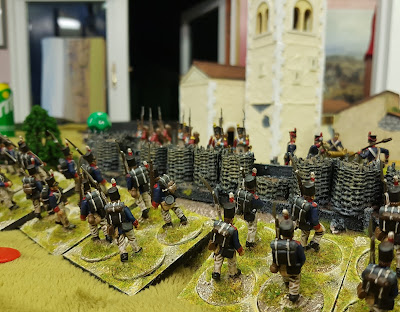 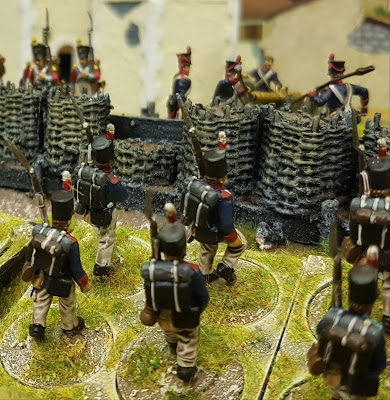 A great game... well balanced and it could have gone either way if only we'd had better dice rolls and tactics!!!

Other games over the last week or so have included trying out Discworld: Ankh Morpork as a 2 player game instead of our usual 3 player game.  It worked remarkably well and I'd definitely try this again. 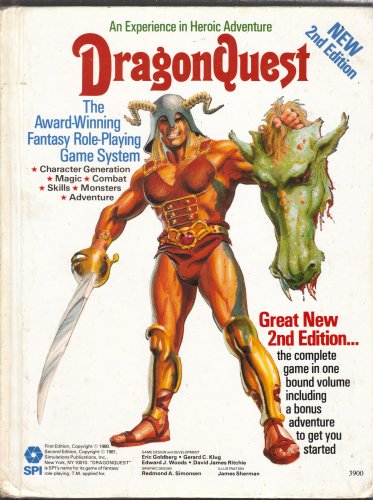 I also played in the 2nd instalment of our online roleplaying game using Roll20.  We are playing Dragonquest which is a very 1980s RPG but holds up very well.  Appropriately enough I'm playing this with a couple of people I knew at the uni games club back in the early 80s as well as people in assorted countries.  The setting is an interesting early Persian style world.  So far I have learned that my supposedly agile and nimble Halfling thief is extraordinarily cack-handed and managed to fluff most critical rolls but somehow I'm still unharmed...I suspect this may not last!

A return to proper gaming...

Gaming is beginning to return to something starting to resemble normality with a couple of face to face games.kindly hosted by Eric the Shed... his newly expanded shed is big enough to safely accommodate 4 players with a bit of sensible social distancing.

So far we've played a Napoleonic battle and a refight of the battle of Abu Klea.  There are excellent reports HERE and HERE.

I have 'borrowed' these photos from Eric's blog.


I've also continued the Imperial Assault campaign with my son... the heroes are doing well but narrowly lost the last game which means I was able to introduce a scenario into the campaign which might see the arrival of Darth Vader... bwah, hah, hah!!!

I also took part in my 1st proper role-playing game for about 30 years this week.  An old friend from my uni days in Glasgow was hosting a game on Roll20 and I was lucky to be invited along.  We're playing Dragonquest...a rather old school system from the 80s but one which has some interesting features which still hold up well.  It was great fun and interesting to be sitting round a virtual table with players from Scotland, England and Canada.  The online system worked remarkably well and it was a real blast, even if I was getting flashbacks to 1983!
Posted by alastair at 10:06 8 comments:

Email ThisBlogThis!Share to TwitterShare to FacebookShare to Pinterest
Labels: Colonial, Napoleonics, Role Playing
Newer Posts Older Posts Home
Subscribe to: Posts (Atom)
"At the age of four with paper hats and wooden swords we're all Generals. Only some of us never grow out of it."