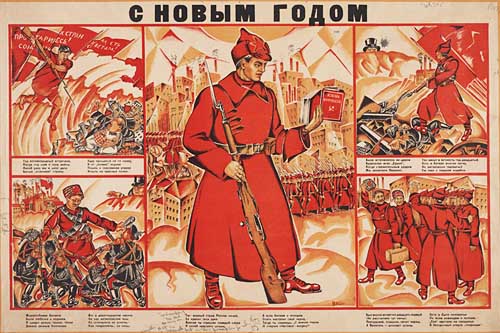 There are just a few hours left in 2019 so it's time for the traditional end of year blog post.

I haven't had a chance to do a recap on the year...that will have to wait a few days.  We've been away in Glasgow visiting family and only got back a couple a couple of days ago.

I hope you have a great Hogmanay and 2019 is a good year for everyone.  Awra best (as we say in Glasgow)! 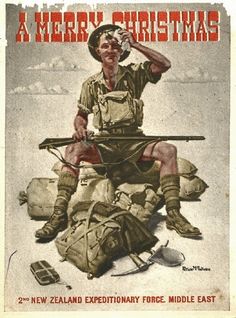 So that's it...Xmas shopping all done, presents wrapped (actually I've just remembered a couple of things that still need wrapping!), enough food bought to last a month long siege even thought the shops are only shut for about 12 hours and a bottle of wine ready for drinking after a last very chilly dog walk.

Best xmas wishes to everyone...have a great day wherever you are.
Posted by alastair at 19:47 10 comments:

I'm always on the hunt for a decent set of rules for a Star Wars setting and I have high hopes for my latest acquisition, Fistful of Lead Galactic Heroes.  I've been a big fan of their Horse & Musket version so I'm hoping these will work well for a different setting. 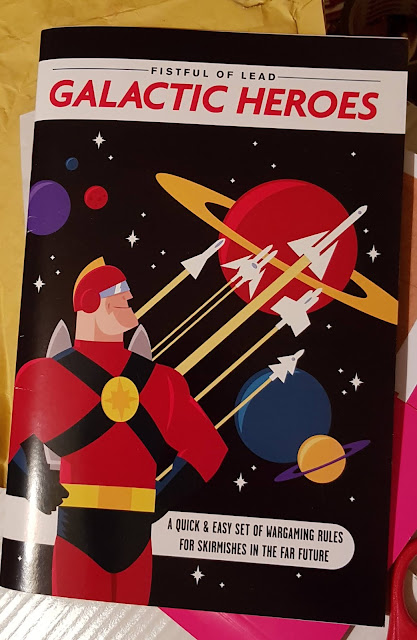 I managed to pick up the last issue of Wargames Illustrated the other week with the free Cruel Seas sprues.  As this game is (hopefully) turning up on Xmas day so reinforcements will be handy.  I ended up buying 2 issues to make sure I got the S Boat and MTB series.  Apparently the next issue has some more freebies.

Online discussion about the game is a little worrying.  The models look great but the rules are apparently a little, erm, rushed.  Warlord have already produced an 11 page errata!  I'll reserve judge until I've actually seen and played them (unlike several online critics I've seen) but if they don't work they'res always the excellent rule set Action Stations. 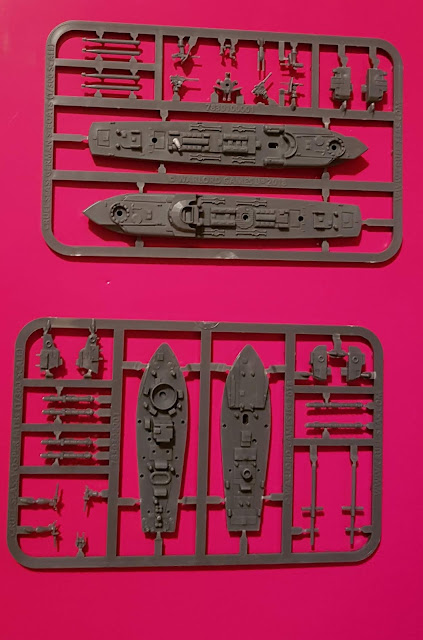 Last month I posted about the game of Blood Red Skies I'd played at the local club.  I was impressed and went out and splurged some birthday cash on the starter set.

The components are pretty nice with a set of Spitfires and Me109s and the adjustable flight stands to mark the status of your plane.  Size-wise these look as though they won't be too glaringly different to some of my existing planes, especially if I mix and match with bombers instead of other fighters. 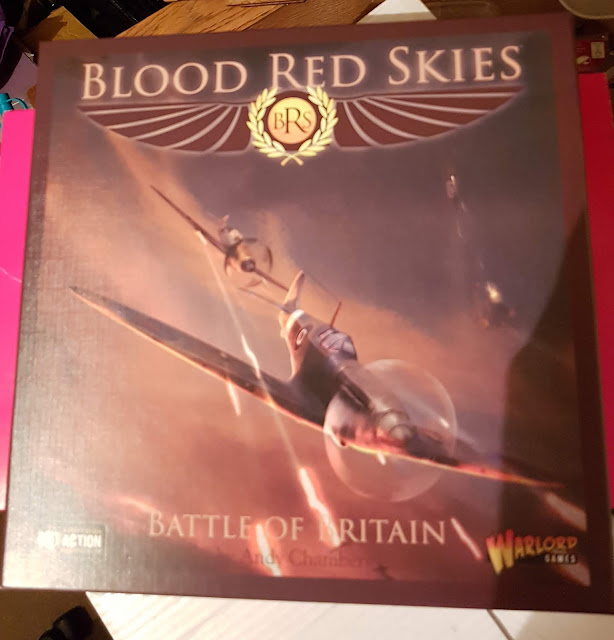 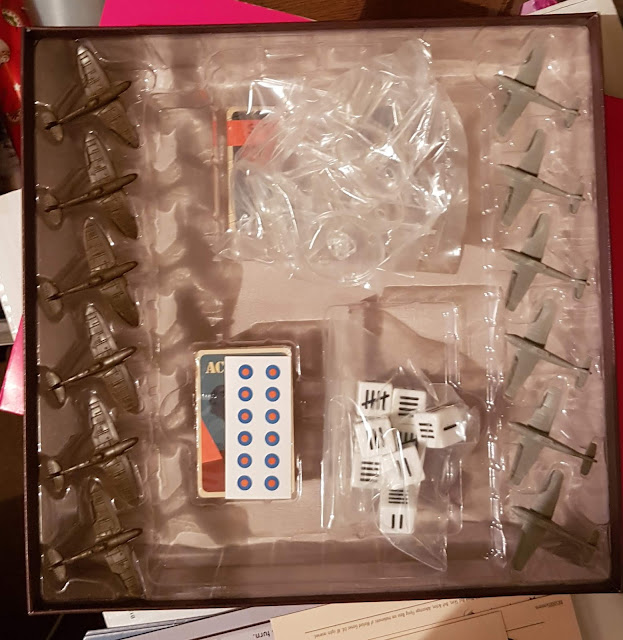 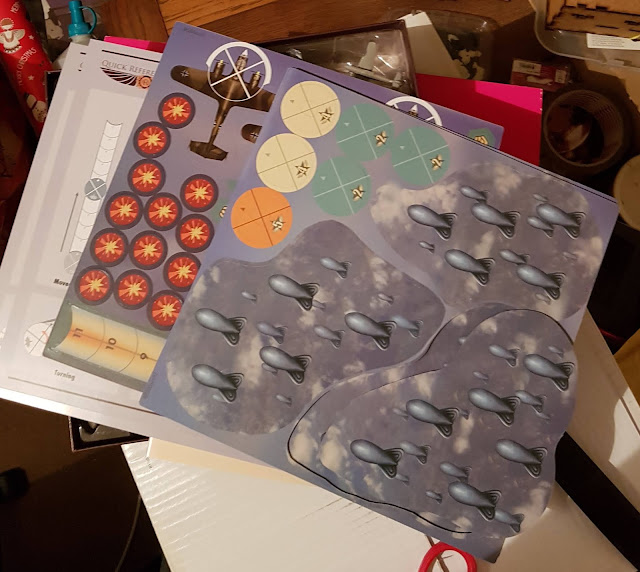 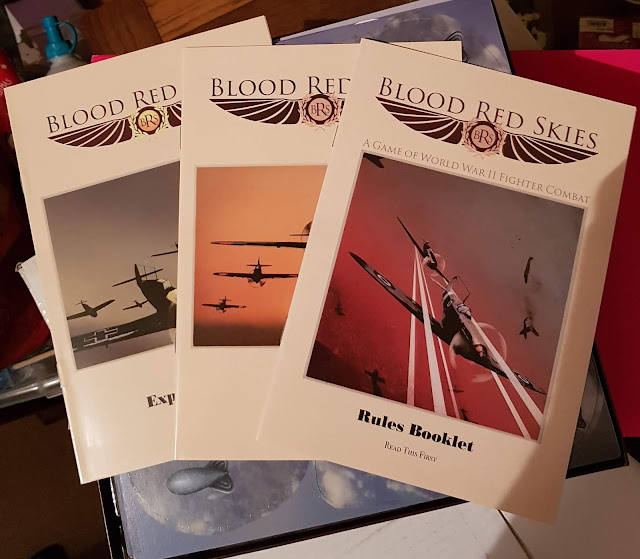 Anyway, I hope.you all have a great Xmas and I'll see you on the other side!

After a very long break I played out the latest chapter of our ongoing Imperial Assault campaign this week.

This has been taking place very slowly and it has been ages since we played the last game.  Luckily my opponent Andrew had some handy notes and a better grasp of the campaign system than I did, so we were able to pick up quite smoothly from where we left off.

IA has a good campaign structure with some 'Story missions' which are determined by the outcome of preceding stories.  These are interspersed with side missions which give the Rebel scum a chance to gain experience and possibly gain some extra equipment and Allies.  As the Imperial player I get the fun of running the scenario and knowing what is about the hit the Rebs.

I won't go into too much detail about the scenario as the fun of the game is the unknown elements but it is one in which the Rebels have a very slim chance of success... think of it as the episode that is full of peril and leaves the heroes struggling before they triumph in the next episode.  It does mean that it can be quite frustrating for the Rebels as it is quite unbalanced.

To make matters worse Andrew only had 2 heroes...although this meant they had additional bonuses to compensate for lack of numbers, they really needed the extra characters to have a chance.

And to make things even worse, Andrew had brought along Chewbacca as an ally which was good for him but gave me lots of Threat points which meant I could deploy Imperial reinforcements from turn 1 rather than turn 3 or 4.

Suffice to say the Rebels didn't win but I've no doubt they will have more luck in the next chapter.  We've had a rethink and will increase the heroes from 2 to 4 which will make it easier to defeat them individually but I think the numbers will give them a lot more flexibility.

On the paint table this week....  more Samurai for Test of Honour.  I'd been very wary of painting Samurai/Japanese figures but these have been nice to work on although I know my painting ability isn't up to adding the finnicky detail that some people can manage.

Nevertheless I'm quit pleased with these and even managed to assemble the figures without too much swearing.  These are the ones that I tried using a different base coat technique (the impressive sounding Zenithal Priming).  Did it make much difference...none at all as far as I can see although the lighter undercoat (black + white top spray = grey surprisingly!) did make it easier to pick out some of the fine detail so I may continue with this. 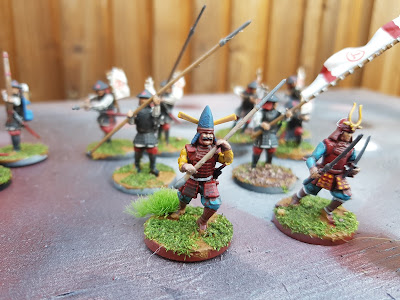 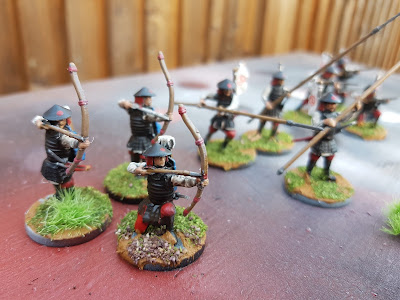 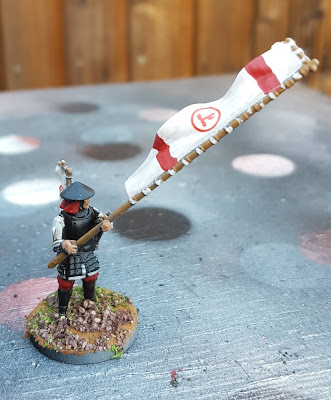 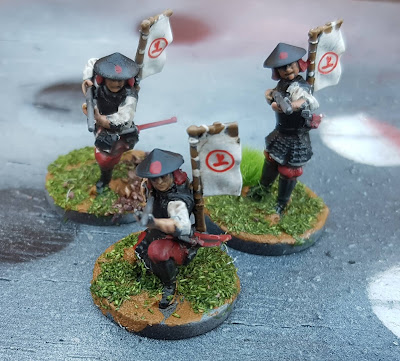 Posted by alastair at 17:39 No comments:


I've been wanting to try out Blood Red Skies for some time.  My rules of choice for air games have been Bag The Hun but I'd heard lots of good reports about BRS.  Luckily there was a multiplayer game arranged at the local club this week so I managed to blag a space in this and have a go.

The rules are deceptively simple.  They have dispensed with altitude levels and instead planes are either Advantaged, Neutral or Disadvantaged...depicted by using their moveable flight stands although a marker works just as well.  Planes have to be in a better Advantage state to shoot at an opponent but you can also use up this status and do other things (manoeuvre, increase movement etc).

Planes can also attempt to outmanoeuvre opponents, forcing their Advantage status to degrade and making them an eligible target for next turn or for your wing man.  It does encourage some tactical thinking and the use of formations which is always a good thing.   I think there are more complicated rules and tactic cards etc in the boxed set but we didn't use these as it was confusing enough with 8 players.

The game set up had targets on either side of the Channel (ships, radar bases etc) which our bombers were aiming for while both sides had flights of fighters whose mission was to protect the bombers and see off the enemies fighters.  I had a flight of 3 Spitfires who fended off some Me109s and kept a flight of Blenheim's intact.  At the other end of the table there were an assortment of planes including some rather nice Gloster Gladiators slugging it out.  As we all had different victory point criteria it was hard to tell who was winning but in the end it was a narrow victory for the Luftwaffe.

I was impressed enough to go off and order the starter set.  Annoyingly the models produced by Warlord Games are 1/200 while the models I already have are 1/300 but I'm hoping the difference in scale won't stand out too much.

Email ThisBlogThis!Share to TwitterShare to FacebookShare to Pinterest
Labels: Air Warfare, Bag the Hun, WW2
Newer Posts Older Posts Home
Subscribe to: Posts (Atom)
"At the age of four with paper hats and wooden swords we're all Generals. Only some of us never grow out of it."