Like buses...you wait ages for a game of Cruel Seas and then 2 come along at once!  I've had the game since xmas and very diligently painted up my boats but never actually managed to get them on the table.  Luckily Mike at the Guildford club offered to put a game on so I was able to play there and then followed this by a second night of boaty-action with my friend Andrew.

In both cases we ended up playing the same 2 scenarios which gave a good chance to test the rules out and try and avoid making the same mistakes twice (spoiler....I failed at this!)

Scenario 1 (which is actually Scenario 2 in the book) is an attack on a merchant ship.  In game one I played the British, with the merchant ship and a Vosper and quickly managed to manoeuvre my boat completely out of position, leaving the tanker vulnerable.  My opponent was able to set up an torpedo run which managed to hit (not always easy in CS) and then passed the 'dud' test causing a huge amount of damage but not sinking the tanker.

Here one of the flaws in CS came to light...there doesn't seem to be any penalty for heavy damage in terms of speed or manoeuvrability.  Rules such as Action Stations introduce a reduction in maximum speed for each hull box lost.  My tanker limped on but the enemy S Boot was able to finish it off with gunnery before speeding off into the night.

In the replay of Scenario 1  a week later I still had the tanker but played the Germans this time.  This was a much closer affair...the escorting S Boot was able to inflict quite a bit of damage on one of the attacking Vospers and, thanks to some nifty steering with the tanker I was able to avoid being a sitting duck for the other Vosper.  It came down to the wire...just as my tanker was about to exit the table the MTB launched 2 torpedoes.  the draw of the dice determined that I escaped which was a little unsatisfying but a close run thing. 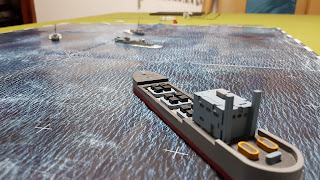 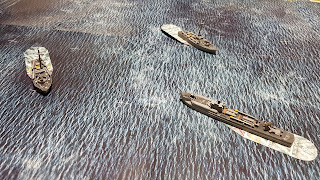 Scenario 2.  The second game (we managed 2 scenarios in an evening quite comfortably) was no. 4 from the book.  An MTB has been damaged and is in the centre of the table, immobile but able to defend itself with limited firepower.  Rescue boats are arriving but enemy boats are also speeding in to capture the crew.  Both times I played the British rescuers.  Given the size of the playing area all boats are into action very quickly.  In the first run at this scenario one of my MTBs was hit and received a critical bridge hit...this meant I couldn't change course and I promptly steered at speed straight into an oncoming E Boat, disintegrating in a cloud of plywood and scratching the paintwork on the larger German boat.  My other rescuers were under heavy fire and then, to cap it all, the boat we were coming to rescue promptly sank!  The E Boats were able to nip in and capture the crew at which point the game ends.

In the second game a week later I was again the British and was determined not to crash this time... 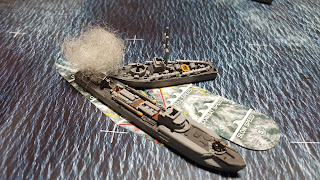 Oops... this time I couldn't even blame a critical dice roll.  This crash was down to my poor steering!  I didn't sink but again came off worse and was then shot up by the other E Boats.

Another Vosper received a critical hit on a torpedo which set off a torpedo on deck finishing that boat off... 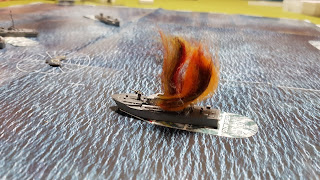 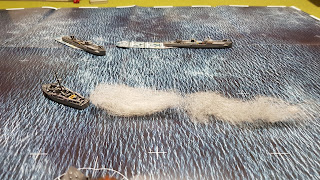 Again the damaged boat sank before I could get close enough to rescue the crew and the survivors in their dinghies were taken on board by the E Boats...probably the safest place to be! 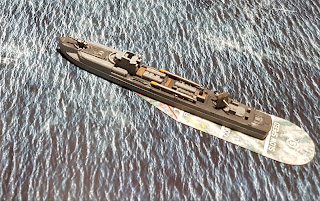 So...what's  the verdict on Cruel Seas?  I've always been a fan of Action Stations and it's hard not to compare the 2 sets.  Cruel Seas definitely wins on the ease of recording speed and damage: the wake markers make it much easier to manage the speeds of multiple boats without having to do lots of record keeping although this is at the price of potentially over-simplifying things.  There are lots of gaps in the rules though where things are not addressed or the rules that are there are very simplified...spotting, use of flares and illumination etc.  Action Stations definitely wins on this count and I guess there's no reason not to combine elements from both rule sets.

I'd been a bit concerned about the limited playing area.  Cruel Seas comes with an A0 size mat (84cm x 1120cm approx.) which instinctively seems too small.  Of course there's no reason not to play on a larger table but for these scenarios it was good to try them out as intended.   Interestingly in the first evening I found it very limiting while in the second night's games I quite enjoyed the challenge of having to think carefully about manoeuvring in a limited space.

Overall I'd say Action Stations would probably be my rules of choice for a 2 player scenario but if I wanted to play a couple of scenarios in an evening or to have multiple players per side then Cruel Seas is a much speedier, and manageable game

I still haven't actually managed a game of Cruel Seas yet (although I have a couple lined up in the next week or 2) but I have now painted up all the starter set boats as well as  some of the freebies that came with Wargames Illustrated.

The game comes with a cardboard template for a merchant ship to give your MTBs/S Boots something to torpedo but obviously I'd much rather have proper target.  Warlord have been rushing out a lot of very nice models over the last few weeks since the game launch: these look great but aren't cheap.  I'd also checked out 1:350 scale model kits at my local model store (Dorking Models) but these are even more expensive...eye-wateringly in some cases!

As my current spending is on a pretty tight rein I've been looking at alternatives and came across a post in another blog about MDF ship models.  Embarrassingly I can't remember whose blog it was, so apologies to my fellow blogger.

(EDIT...I found the original blog post and it can be found here.  Many thanks to John Lambshead for posting this)

They had plugged ships sold here at JB MDF Products.  There are a variety of models available but I went for a pair of Liberty Ships which worked out at a very affordable £4.25 each.  As you'd expect with MDF the model is a bit boxy and nowhere near as detailed as a plastic kit but as a budget option it's hard to beat. I'm not sure I'd go with their armed trawler model as I think you need the finer detail for the smaller boats but it seems to work for the larger ship.

The hull of the ships comes as 3 strips with the superstructure added on top in layers: 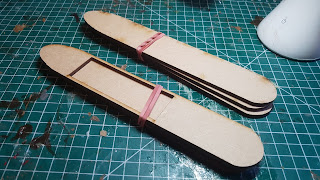 All the parts come loose in a bag...initially I'd thought this was going to be a real challenge but there are some simple instruction on the eBay shop page which made it very easy.  Each ship took about 30 minutes to build
. 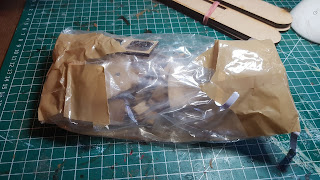 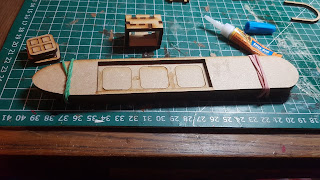 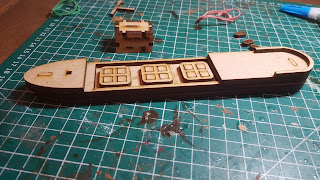 My fundamental failure to follow instructions meant I hadn't worked out which way up the masts go.  It's pretty obvious if I'd paid attention.  This is why I hate Ikea... 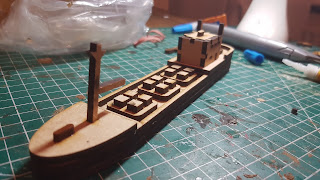 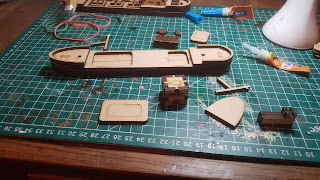 Painting was pretty straightforward... grey undercoat (from Halfords) followed by assorted shades of grey on the superstructure and a dull red waterline.

I'm pleased with these...they look a lot better than I'd hoped and should make a good target for the little boats.


Last year I started working on "paper soldier" armies for the Jacobite wars, using the excellent Jacobite book in the Battle for Britain series by Peter Dennis.  Scarily it was back in July that I'd worked my way through the Government army and then took a pause.

After xmas I decided this seemed like a good project for the dark winter nights and so I've been busily cutting and sticking like a demented 6 year old in a Primary school art class.  In a couple of weeks I have produced 8 Highlander regiments (36 men in each regiment) and 3 French regiments including the Royal Ecossais.  A few more Highlanders will be needed as I suspect the attrition rate will be high for them!  I also need to produce some Lowland troops, Irish and a few horse and artillery.

There are some rules included with the book (by Andy Callan) but my preference is probably to use Black Powder as a starter.

Email ThisBlogThis!Share to TwitterShare to FacebookShare to Pinterest
Labels: Black Powder, Jacobite, Paper soldiers
Newer Posts Older Posts Home
Subscribe to: Posts (Atom)
"At the age of four with paper hats and wooden swords we're all Generals. Only some of us never grow out of it."