This week I had a chance to try out Angels One Five, the strategic WW2 air board game from the stable of Philip Sabin and Victory Point Games.  Chris and I had been trying to arrange this for months but real life has a habit of interfering with important things like gaming.


We did finally get the chance to take to the skies though and it was an interesting game.

The game is played using a series of aircraft counters which are viewed top down...because of this each time you change altitude bands the counters become smaller (as you get lower) or larger as you climb.  An interesting idea but I'm not sure it added much other than giving us a confusing number of counters to swap around as we dived or climbed.  The board itself is quite small and consists of 3     6" x 17"  boards which are repositioned as the target bombers fly off the edge


Each scenario pits fighters against enemy bombers who fly in a straight line across the board and a number of escorts.  This is very much the focus of the game and it takes a strategic view of attacks.  We played through the first 2 scenarios and it took me till the 2nd one to grasp what the game was aiming for.
I've played various WW2 dogfighting games with Bag the Hun a definite favourite and initially I approached this in the same way.  In fact the game is much more subtle than it first appeared.  There is a clear link between speed and altitude in the game and it quickly became clear that once you lose altitude it's quite tricky to regain height.  Similarly if you slow down to match the speed of the bombers (you need to finish your movement in the same hex in order to fire so this is tempting) it becomes extremely difficult to increase speed again.  Quite a contrast to games like BtH or indeed X Wing where planes speed up and slow down, climb and dive in a suitably heroic style.
By the second scenario I'd realised that height and power are actually quite finite resources in this game and the skill comes in planning your attack and timing when to change altitude and speed...sadly something I failed to grasp in time!  My 2 Hurricanes successfully lined up on the bombers and evaded the fighter escort but the first one only managed 1 hit on the bombers before being driven off the map by return fire.  My second plane slowed down at the wrong point and I quickly realised I wasn't going to be able to catch the bombers and had set myself up to be bounced by the circling Me109s.
A very interesting game which left me with quite a bit to think about.  Our next plan is to try it again but this time using 1/300 planes on a hex mat instead of the counters.
On an air war related note, there is a new Kickstarter about to be launched by the Plastic Soldier Company for an updated version of the old TSR Battle of Britain game designed by Richard Borg with 1/300 scale aircraft.  Definitely one to keep an eye out for!
﻿
﻿
Posted by alastair at 14:54 1 comment:

The Winner Takes it All!

I've bought both Miniature Wargames and Battlegames both separately and then more recently in the combined format, since they first came out, through both good and bad issues.  I'm a fan of the more recent directions in the magazine and now I have even more reason to be a fan!

Each month, tucked in the back pages lies the competition and I like to have a go at this...if the prize is something that appeals then I've often sent off an entry with no success. Admittedly in the past this has been because I've failed to answer the questions correctly, failed to supply my details etc.

But this week an email popped into my inbox from Henry Hyde announcing that I'd won!  The prize in the last issue was £25 worth of stuff from Old Glory so I'll now be going off to peruse their website and see what unnecessary items I can pick up.

Incidentally the MWBG website is now shared with their stablemate Tabletop Gaming magazine which is well worth having a look at if you're a fan of boardgames (which I suspect is most of us).

Before I go I'd just like to thank my family, my friends, the dogs for their unswerving support, my agent.......
Posted by alastair at 15:34 9 comments:

Haven't posted for a couple of weeks due to on overwhelming amount of day to day stuff which seems to get in the way, and now I've succumbed to a summer cold which has left me feeling generally yuck...yay...summers here!

The other week I managed to try out Star Wars; Rebellion, the latest in the series of box-filling boardgames from Fantasy Flight Games.  Whereas Imperial Assault focuses on skirmish hero based actions, Rebellion is a big scale galaxy-wide saga, in which players send heroes off on missions to planetary systems.


As with all the FFG games the components are really nice with a range of mini Destroyers, TIE fighters and X Wings as well as AT-ATs and AT-STs and Imperial and Rebel troopers, all of which can be deployed to conquer/liberate systems and gather resources.  The Imperials also get to start with a fully-functioning Death Star and even have the option to build a second one (because one is never enough!).  These are deployed across the SW galaxies with the Imperials attempting to find the location of the system which contains the hidden Rebel Base.  The Rebels have the option to move this if the Stormtroopers are getting too close and it's quite nerve-wracking watching them close in on your base, even if they're doing it unwittingly. The rebels, meanwhile, have a different set of victory conditions which involve winning support from systems and gaining influence.


Each turn players deploy a growing number of familiar (and not so familiar) heroes and villains from the films and send them on a range of missions taken from a card deck.  This actually gives quite a fun, cinematic effect as you tell your opponent that you are sending Mon Mothma off to gather support in the Hoth system.  Not so fun when he then despatches Boba Fett who then captures her and subjects her to hideous interrogation (my opponent seemed to take a bit too much pleasure in this...). 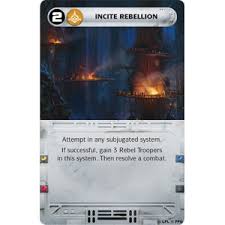 The Imperials can either concentrate on trying to build up information on which systems don't contain the Base )and therefore deduce where it might be) or simply ruthlessly trample all opposition until the Rebels are backed into a corner...funnily enough that's the option my opponent went for and to be fair it did seem to be working.  We played the game on a typical club night so we had about 3 hours from set up (which took us a while) to finish which wasn't enough time.  The box suggests 3-4 hours which I would reckon is about right once you are familiar enough to set up quickly.

One reservation I have with some of the FFG Star Wars games (especially Armada) is the sheer weight of components and the number of cards and tokens that you have to keep an eye on. I'm pleased to say this isn't such an issue with Rebellion.  It can be confusing remembering which card deck is which and when to draw from them but this isn't too bad.  The game doesn't have the wealth of upgrades and bonuses that you find in X Wing or Armada so my little brain could cope.  I also like games where each side has victory conditions that aren't a mirror image of each other and the Empires ruthless, crushing expansion versus the Rebels winning hearts and minds works well.

Email ThisBlogThis!Share to TwitterShare to FacebookShare to Pinterest
Labels: Boardgames, Star Wars
Newer Posts Older Posts Home
Subscribe to: Posts (Atom)
"At the age of four with paper hats and wooden swords we're all Generals. Only some of us never grow out of it."