Tinsel, turkey and tantrums... It must be Xmas!

Well, that's Xmas done and dusted, and hopefully everyone got some shiny new toys to play with. We're up visiting family in rainy Rutherglen so no opportunities for games (unless I can sneak onto my son's Xbox.

I didn't as we were saving our pennies and putting them towards a new iPad.  If anyone has any good recommendations for war gaming related apps please let me know... I've already spotted that there are versions of Carcassone and Settlers of Catan available but any other ideas welcome,

I say no pressies but I did treat myself to a copy of Neil Thomas' rules for 19th Century war games.  I've always found this period fascinating.... It seems such a momentous period of change for Europe and yet is relatively unknown (outside of the war gaming world of course).  Up until now I've used Black Powder for the FPW but I've had very good reports so fingers crossed.  I 'll update once we've managed a game.


We're up in Glasgow for the hols so a trip to Static Games will probably also be in order for more things I don't really need!
Posted by alastair at 16:55 No comments:

Along with half the planet we went off to the local cinema to see The Hobbit today [it was my son's 15th birthday which seemed like a good excuse!] 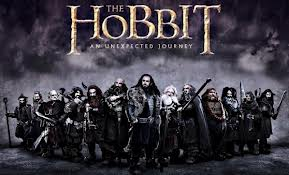 I'd been a bit wary after reading some of the reviews that are floating around... a lot seem to focus on:


So... given all of the above I was a bit hesitant about whether it was going to be the success I was hoping for.  I must admit however all my expectations were met and more.

The tone of the film feels quite different to the LotR films... it would be wrong to describe it as more child friendly but there was a lighter tone in places.  It was nice to see Ian Holm reprising 'old Bilbo' and Martin Freeman was a natural in the main role.  Other casting seems to have paid off well... the dwarves are distinctive enough that they were distinguishable as separate characters even though most didn't have much in the way of dialogue apart from Thorin and Balin.  Richard Armitage captured Thorin's grumpiness well and to be honest most things with Ken Stott [Balin] in are guaranteed to be good!

I thought the use of songs was excellent and suited the tone of the film... but then I was one of the few that missed Tom Bombadil from the LotR films  :)  Loved the Neil Finn song at the end too.

The addition of storylines from the LotR appendices and notes down the back of JRRTs sofa fitted well into the film and didn't feel like extra padding... yes, there were odd changes to the plot but nothing that I couldn't live with.

The frame rate and 3D had reportedly not worked well for some people but I didn't find it intrusive or experience the nausea that some had.

And then there was Radagast... birds nesting in his hair... little hedgehog friends...eating too many 'special' mushrooms... and the rabbits....

I thought he was a fantastic addition to the storyline... I've always though Sylvester McCoy a great actor anyway, and always had a soft spot for Radagast from the brief mentions he gets in the books, and he was played perfectly...even with the bunnies!

So, overall I was hugely impressed and mightily relieved.  A big success!!!


Note... none of the above has convinced me to shell out £75 on Games Workshop's latest Hobbit offering however!  And definitely not £50 on a rule book that I'm guessing will be very like their LotR books.  All of which makes me very grumpy....

Mind you... some of those miniatures do look nice..... now if they produce a Sebastien the Hedgehog figure....

Another Monday... a second chance to try out the X Wing rules that made such a good impression a few weeks ago.

This time Andrew and I swapped sides with the Rebel Scum now transforming into gallantly heroic freedom fighters in my hands.  We aimed for approx. 70 points per side: Andrew, ably assisted by Chris fielded Lord Vader himself in his Advanced TIE fighter accompanied by to bit part TIE fighter pilots.  In response I chose Luke Skywalker with R2 strapped to the X Wing and a Y Wing upgraded with an Ion Cannon.

The Empire began in pretty assertive style by flying straight at the Rebels which allowed me to concentrate on one fighter and cause several hits.  We quickly found ourselves in a massive tangle with lots of shots at point blank range.  Unfortunately Darth Vader then came into his own with a multitude of Actions [most people only get one] and all round high skills which were able to quickly wear down Luke's X Wing's shields.

Luckily the R2 unit proved its worth and was able to restore shields providing I didn't do anything too complex in manoeuvring and this bought Luke several turns.

The TIE fighters struggled to bring their guns to bear on the Rebels and the Y Wing's Ion cannon began to prove particularly annoying: if it manages to hit it causes 1 point of damage but also slows the target ship to a short move... effectively pecking away at them and wearing them down.  Much to Andrew's frustration the TIE fighters couldn't get into an effective position and Luke was able to finish them off before facing off against his father [oops... hope that wasn't a spoiler!]


Here Darth Vader's superior skills proved very effective and Episodes 5 and 6 were cut off prematurely as Luke's ship exploded [...maybe he escaped in some implausible fashion...]

The rather cumbersome Y Wing was then left facing Vader and I suspected here that the game was up and the Advanced TIE fighter would make short work of the slower ship.  Again though the Ion cannon proved its worth, slowly wearing down the fighters shields and hull and negating the Empire ship's chances to get into an effective firing position.  The Y wing circled around Vader, slowly blasting away  until the last hull point was gone and Skywalker Senior was snuffed out.

Another very successful outing for the X Wing rules.  We still haven't added in some of the other options such as asteroids etc and we'll have to try these next.  The next sets are due out in February next year and will include the Millennium Falcon... can't wait!

Posted by alastair at 23:07 No comments:


A hastily arranged game of Muskets and Tomahawks last night gave us a chance to try out another variation off troop combinations.


I fielded a mixed force of 3 French Line Infantry units and 2 groups of Indians but Anthony had the opportunity to unveil his new British troops.  He’d decided to go for quality over quantity with a unit of Grenadiers, a unit of Light Infantry and a unit of Rangers... all elite, a smattering of marksmen but very limited in numbers.  Would the Grenadiers impressive hats win the day?  Was the purchase of a cavalry sword for his officer going to influence the gods of war?


In a reverse of our last game the British were intent on attacking some peaceable French settlers and torching their log cabins.  The French had been warned of their advance and were tasked with destroying them.


Keith had joined us for this game and took command of the Indians while I looked after the French Line.


The side missions had led to the British officer dragging a young lady as a hostage along with him [possibly in some not very well thought out attempt to impress her] and left a French officer hostage at the far end of the table [who we decided to ignore for the rest of the game... hopefully he eventually managed to chew through his bonds!]


The game began with the French advancing slowly past the village while the Indians trotted off through the woods trying to find an opportunity to fall on the British flanks.  The British Light Infantry and Rangers sped off south towards the village, leaving the Grenadiers to plod along slowly in their wake.  Having seen the speed of the British Irregulars advancing the French switched direction and took up position behind the village fence bracing themselves for the oncoming hail of elite fire.  One of Keith’s Indian units appeared from the village and charged straight for the Rangers in a flurry of feathers and hatchets.  A furious few minutes of hacking ensued and what was left of the Rangers fled back out of the woods.  Unfortunately this left the Indians at the mercy of the Light Infantry who almost wiped them out with musket fire, leaving one lone Indian to flee out of the woods back towards his French colleagues [remember him... he’ll reappear in a minute!]


Meanwhile the French Line infantry had redressed their lines and got into position to finish off the few remaining Rangers and to exchange fire with the Light Infantry.  We may have forgotten to re-roll some of the Lights missed shots [with the Marksman trait] but even if we had I suspect they would still have come off worst against 2 Line units in Firing Line.  Although their casualties weren’t high the Lights were forced to recoil and here we learned a crucial rule in M & T.... don’t advance down the table edge: if you do and then recoil you’ll move off table and be lost forever!
Keith’s other Indian unit had been shadowing the Grenadiers who had suddenly accelerated and were beginning to threaten the village.  Repeating his successful tactic and madly charging straight at the enemy the Indians charged through the woods onto the Grenadiers.  This was a much closer fight... the Grenadiers melee ability is as good as Indians and they outnumbered them but the Indians were ‘bloodthirsty’ making them especially effective in hand to hand.  Again Keith was able to force the British to recoil and again the table edge proved a valuable ally as the Grenadiers were forced over it and destroyed.
﻿
﻿
So, the Quality vs. Quantity experiment wasn’t a great success... the Grenadiers might have made a difference but were slow in getting to the front [I blame their hats!] and the volume of ‘adequate’ gunfire outweighed the ‘elite’ fire that the British had in too limited numbers.

Email ThisBlogThis!Share to TwitterShare to FacebookShare to Pinterest
Labels: French Indian, Musket and Tomahawk
Newer Posts Older Posts Home
Subscribe to: Posts (Atom)
"At the age of four with paper hats and wooden swords we're all Generals. Only some of us never grow out of it."