Over in Big Lee's blog, he has recently passed the incredible of 2 000 000 views!  It's a huge number and I'm certainly a long way from reaching those dizzy heights.

To celebrate he is holding a very generous give away of £100 in vouchers.  All the details are here... 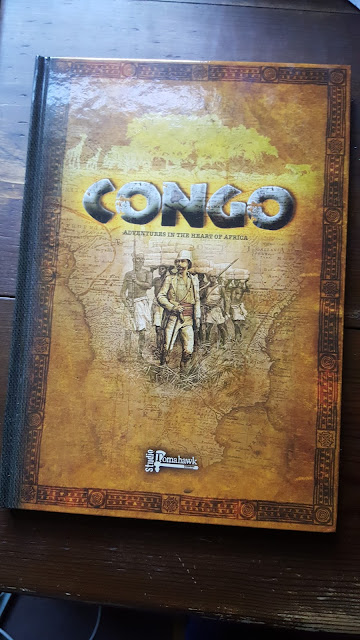 A few years ago 'Darkest Africa' was the setting for the games all the cool kids played, often using the excellent rules produced by Chris Peers.  As with all wargaming fads, we cutting-edge trendsetters quickly moved on to the next thing leaving boxes of Zanzabari Slavers, Azandes and Belgians languishing in their boxes.  But all of that is about  to change as the Circle of Life has turned completely and Darkest Africa is cool once again﻿! 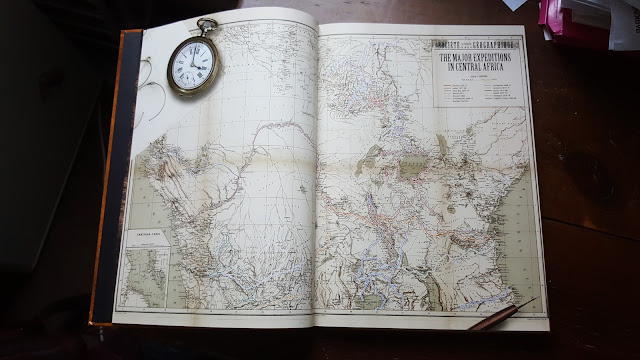 Congo are the latest set of rules from Studio Tomahawk, producers of the rather excellent Musket and Tomahawk rules for the French Indian Wars and have been in the planning stages for some time.  Having heard they'd been released I immediately ordered a set from Northstar and the box arrived very promptly 48 hours after the order had been pinged off to them.
The game  deliberately takes a Pulpy approach to the setting describing the setting as "an unexplored, fantasized, wild, dangerous and enchanted Africa, as imagined by newspapers at the end of the 19th Century".  Games are aimed at forces of around 30 figures from one of 4 factions...The White Men Expeditions, The Sultanate of Zanzibar, The Forest Tribes and The African Kingdoms.
The rulebook itself is hardback and 104 pages. It's very nicely put together with lots of photographs and illustrations.  At this point the frugal Scot in me comes to the fore and wonders if the rules could have been produced for less cost with slightly lower production values.  Don't get me wrong, the book is a really nice thing but the full page photos, while they're very pretty to look at, don't add a lot to how the game plays.  Saga and Muskets & Tomahawks (from the same company) are softback and more concise and are both excellent games.  I'm still not sure in my own head how I feel about the balance between gloss and price....I'll have to think about that one some more﻿

Along with the rulebook you'll need a set of cards and tokens which are supplied with it.  More on these later.

The mechanics are relatively straightforward and use a nice combination of card activation but not totally randomised.  Each player has a hand of 7 Action Cards which give a combination of Movement, Shooting or Influence (morale) actions. In each turn they select 3 of these  to play.  Players also draw a Totem card each turn which gives additional bonuses.  Finally Witchdoctors (if you have them) have Sorcery cards.  Players then reveal their first Action Card simultaneously and the one with highest Initiative moves first.  One side (determined by the scenario) holds an Initiative Token and in the event of a tie can choose to go first, but then has to relinquish the token to their opponent.
﻿
﻿
﻿
﻿
﻿
﻿
﻿
﻿
Movement is similar to Saga in that Short, Medium and Long moves are used and the game comes with some nice templates for these
Shooting uses the same templates.  5's are needed to succeed but different troop types use different dice to reflect their skill: d6, d8 and d10s.  Casualties and events cause stress and these are shown by Stress Tokens which are drawn from a bag randomly.  Groups can also be targeted with "Terror" as an Action in some cases
﻿
﻿
As I mentioned Witchdoctors have Sorcery determined by their Faction: effects can range from removing stress or increasing attacks, to having angry monkeys throw coconuts at your opponents.
The rules come with info for each Faction: each party has 2 Characters who lead the Column with groups of between 3 and 6 figures making up the rank and file.  Characters could be, for example, an Explorer or Reporter for the White Men expedition or a King or War Chief for one of the African Kingdoms.
Scenarios are presented, rather nicely, as newspaper articles (one is shown below).  There are 4 supplied with the rules and, despite my grumblings earlier about cost vs. glossiness, these are really nicely done.  Each one outlines background to the scenario, set up, etc and specifies any special rules that apply including entertaining random events which are picked from 2 substantial tables
Edit - as has been pointed out to me in the comments below, there are actually 8 scenarios which I would have realised if I'd looked at the other side of the newspaper sheets!!!

Finally the rules contain Design Notes which is something I like to see...it's always useful to get an insight into why some of the rules features were derived, and ideas for building an African Village and producing Jungle Vegetation.  Again I thought this was a nice touch

So overall the game looks fantastic.  There are some nice mechanics in there but it looks (from a couple of read-throughs) as though it would play quickly and intuitively but with a strong sense of narrative.  Yes, there is an argument about unnecessary use of photos and chatty sidebars but the rules are very attractively produced and well worth seeking out.  Already there seems to be a flurry of companies producing ranges of African tribes and assorted animals so I suspect these are going to be very popular.  Now I just need to brave the terrors of my loft to find my Darkest Africa figures....

Email ThisBlogThis!Share to TwitterShare to FacebookShare to Pinterest
Labels: Colonial, Congo
Newer Posts Older Posts Home
Subscribe to: Posts (Atom)
"At the age of four with paper hats and wooden swords we're all Generals. Only some of us never grow out of it."