No, not a tribute to the late Erroll Brown, but my prize from Pendragon Without's recent giveaway to mark 10 000 page views ( Linky )It's a rather nifty 28mm church from Warbases and will be really handy for lots of games. 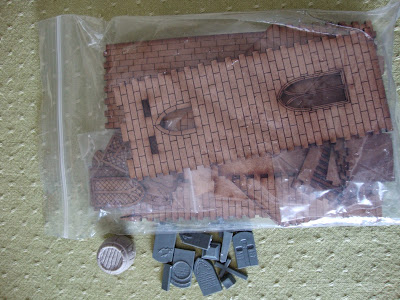 ...but may end up looking like some random bits of glued together MDF if my building skills are anything to go by!!

I'll do an update on progress and thanks again for the excellent prize!!!

Much to my surprise we've kept the idea of having regular family game nights going.  It stemmed from realising that we were all sitting at home doing different things separately rather than together. We thought doing something together at least once a month would be change from all being glued to iPads, phones, laptops and TV's.  My teenage son is keen on games but my wife generally isn't but seems to have been enjoying the opportunity to beat me at every available opportunity!

A couple of weeks ago we had another game of Carcassone, this time with everyone fully understanding the rules as I'd come in for a bit of stick on Facebook for not having made everyone aware of the power of farmers! (see the post about it here ).  Justice was served in the rematch as I came last with my son deploying a farmer in the last couple of turns that appeared to be managing some kind of collectivised uber-farm and collected loads of points at the end of the game!.

This weekend my son had a rummage in his room (always a scary scenario) and came up with Munchkin.  We used to play this a lot, especially on holidays, and realised that we hadn't played it for ages...we discovered a score sheet in the box written on hotel notepaper from our holiday in Porec in Croatia in 2010 so it's clearly been a while!

If you've never played Munchkin it's well worth seeking out a copy...it's an ideal game for filling in an hour or two.  I'm not normally a fan of card games but this one works really well.  Originally designed as an affectionate piss take of D&D games, there are now numerous variants of the game including Cthulhu, Cowboys, Superheroes, Spies etc.  We have a few different sets (but funnily enough not the original game) and this week we played Munchkin Booty...the Pirate themed set.


Games follow the same pattern...each player opens the door to a room and fights the monster inside, if there is one...very D&D...and takes the treasure.  Each monster beaten adds one to your level and the first player to level 10 wins.  There are numerous items of equipment that add bonuses or special effects and the charm of the game is in the humour of the cards...for example in 'Booty' there are numerous 'shark' monsters including Great White Shark, the Adequate Brown Shark, and some Lawyers who are of course another form of Shark!


As in any good 'family' game there are lots of opportunities to stab each other in the back and there was a lot of that in out game.  I somehow managed to quickly rise to level 9 and was poised for victory before being ganged up on and brought back down a couple of levels before my son cruised past me and won the game.

So far the games nights are going well...now I just need to introduce my wife to Chain of Command.....
Posted by alastair at 00:28 2 comments:


I popped into  Sutton this morning to drop off my phone which had mysteriously died yesterday...hopefully it'll be repaired in a week or 2 and in the meantime I'm using my old phone which, although it's only about 4 or 5 years old feels positively ancient!

I checked in at WH Smiths and discovered that there is a new one of what I initially thought was one of those endless part-work collections but in this case it does look useful.  Battles of World War II is a reissue of Osprey titles and For the opener they have packaged Poland 1939 and France 1940 together for £4.99.

These were previously issued in this format in 2009 to mark 70 years since the start of the war and some are being re-released to mark the end.  I've hunted around and couldn't find a lot of info but these seem to be being issued in this double title format for 6 monthly issues.  Worth looking out for!

Over on Pendragon Without, a rather nifty blog, there is a generous giveaway to celebrate hitting the 10 000 views milestone.  The prize is a very generous and lively 28mm church from Warbases.  Have a look here....


This weekend my wife and I had a lovely overnight stay in central London.  At the end of last year my son had entered a competition to win some theatre tokens...much to our amazement he won the top prize (we hadn't even realised there was one!!) of £200 worth of tokens and a night in a central London hotel!  We weren't quite sure which hotel it was going to be and I had visions of a Premier Inn in Hackney but it turned out to be the very nice Park Plaza at County Hall, just next to the London Eye.

As we live on the southern edge of London this might not sound like a huge trip away but we were both very in need of a break so, leaving my son to dog-sit for the night we headed off to London.

There isn't going to be very much gaming related in this post but here are a few of the things we saw...

On the Saturday evening we met some old friends for dinner...we hadn't seen them from about 15 years despite them living in the same city... and had a wander around the South Bank, being tourists and admiring/criticising the architecture.  As this coincided with VE day there were some illuminations going on the mark the occasion 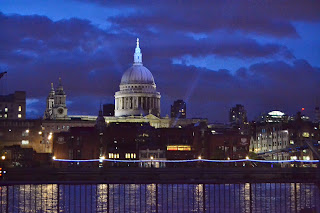 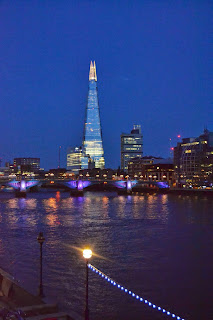 On Sunday, after making the most of the breakfast, we took the Thames Clipper up (or is it down) to Greenwich.  On the way we passed HMS President, a Flower class Q Ship and one of 3 surviving WWI Royal Navy warships, now used for entertainment and dining.  This has been repainted in a contemporary take on Dazzle camouflage and is very striking...


More info about the project can be found here

We also passed HQS Wellington which I must admit I'd been unaware of.  It is a Grimsby class sloop and again is mainly used for entertainment but does seem to also have a museum onboard as well and is currently hosting an exhibition on Hospital and Troop ships in WWI. More info on Wellington can be found here


We eventually arrived at Greenwich and found HMS Ocean moored there... 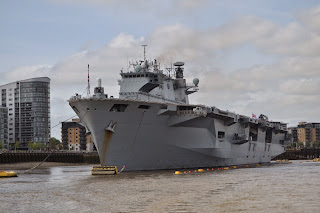 HMS Ocean is the Royal Navy's only Amphibious Assault ship, built in Govan...possibly by my brother-in-law!    As well as service in Sierra Leone and Iraq, Ocean also has the honour of accidentally invading Spain in 2002 when some of her Marines accidentally landed on the 'wrong' beach!!

We spent the afternoon mooching about the market at Greenwich and then discovered that the large queue we'd spotted was for people who had pre-arranged tickets to go on board Ocean, which explained the large numbers of heavily armed police and marines we'd spotted!  Someone in the queue offered us his tickets as some friends had cancelled but sadly we had to decline as time was getting on.

In all our trip lasted just over 24 hours by the time we'd made it home but it felt like a well-earned holiday!
Posted by alastair at 08:44 2 comments:

VBCW at the Shed

I was lucky enough to be invited over to Eric the Shed's wargaming lair this week for a game set in the VBCW genre, using Bolt Action.  Normally his games clash with my regular Monday night club but I was able to make it this week (and it's only about 3 miles from home).  I also met another Shed regular who I last gamed with around 18 years ago in Epsom!

This weeks game was based around a scenario from the VBCW forum....

In the scenario competing Fascists and Socialists are on the trail of the crown jewels which are located in one of 3 farms on the table.  The idea is that the game is played by lots of players around the country and the results are somehow fed into a culminating game which will be held at Partizan at the end of the month.

There is an great write up over on Eric's excellent blog... here


Suffice to say it wasn't my most glorious of evenings and the Socialists were outmanoeuvred early on, allowing the Fascists to concentrate a lot of fire on some of my forces.  Combined with some unlucky dice (always the excuse of the losing gamer!) this meant the Socialists failed to hold any of the farms, and indeed had to flee with most of their forces lost.

As always at the Shed it was an excellent game on a lovely table.
Posted by alastair at 23:22 2 comments:

Email ThisBlogThis!Share to TwitterShare to FacebookShare to Pinterest
Labels: VBCW
Newer Posts Older Posts Home
Subscribe to: Posts (Atom)
"At the age of four with paper hats and wooden swords we're all Generals. Only some of us never grow out of it."