In which Work gets in the way of gaming...

I put my heart and my soul into my work, and have lost my mind in the process.
Vincent Van Gogh


Another lull in blogging I'm afraid as urgent reports for work mean long days sat staring at the laptop which, in turn, means I'm less inclined to then sit down and do more stuff on the laptop later in the evening.  The plans and reports are all done now so hopefully there will be a bit of a break...of course there's always the danger that they'll expect me to actually do something with the plans I've written!

I'm off to Edinburgh for work in a couple of weeks which will also give me a chance to pop over to Glasgow to see family briefly...a nice perk of a long trip for a meeting.

The last couple of weeks have also seen the departure of my son to Uni in the wilds of Wales which has been hard and has meant a bit of readjusting at home.  Last week he was at the Societies Fair to join some clubs...I asked about the Uni wargames club and all he would say was that there was no mistaking who they were (but not in a good way!)...I don't think he'll be joining.  When I was at uni the Wargames club effectively ran the overarching Societies Committee which gave us our own office and storage in the Students Union and funded a few Cheese and Wine evenings through creative (and absolutely legal) use of the Clubs & Societies system !

Never, ever (and I can't stress this highly enough) ever, watch Toy Story 3 when your son has just left for uni...sob.....

I have squeezed in a bit of painting, or at least undercoating, and have based and sprayed my next force for Congo.

I have also managed a couple of games however.  At Guildford I played Black Ops for the 2nd time, effectively re-running a variant of the scenario I'd played a little while ago ( link ).  This time the special forces were tasked with setting explosives on the at the oil plant and escaping.  They successfully managed this and wiped out the rebel forces and reinforcements before the 2nd wave of reinforcements managed to inflict serious casualties on the last turn of the game.  A Special Forces victory but I think serious questions would be asked in the debrief.  Again the rules worked well and the game flowed really well.

Last week saw the debut of Eric the Shed's fantastic Zulu collection and I'm sure a post will appear on his blog soon.  A great game and very bloody...

Slaughter on the North West Frontier

Off to Guildford last night for a game of The Sword and the Flame...one of those rulesets that everyone seems to have played but which have always passed me by.  We were using Mike and Anthony's very nice Armies in Plastic 54mm figures which has prompted me to get back to painting the ones I bought earlier this year.  Of course there are some outstanding Congo natives to paint... and some Aztecs to rebase.... and some ACW ships to paint...

The game pitted our brave boys in khaki against some doubtlessly unscrupulous Pathans as we tried to relieve a  small force holding out in a fort.  TSATF is card activated and thanks to the frequent appearance of the 'HALT' card, which ends the turn sequence, I spent quite a while holding behind a small wood drinking tea and watching Anthony's cavalry gallantly charging the Pathan Horse.  To be honest it was probably the safest place to be...over on the other flank Anthony's troops were mauled by the Pathans and eventually when I did advance I also took a hammering from Andrew's tribesmen who had been skulking in the rocks waiting for their chance to pounce.  The only troops that were happy and undisturbed were the ones in the fort. 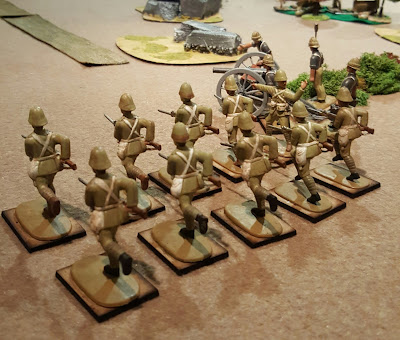 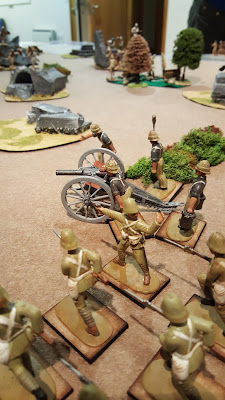 The rules were fun and intuitive, although it helped that Mike and Anthony have played them quite a bit previously.  Definitely 'old school' skirmish style and very entertaining.

Incidentally Mike has set up a rather spiffy Forum for all things 54mm.... http://littlewarsrevisited.boards.net/﻿

There's also a write up on Mike's blog...

I haven't been to Colours or a couple of  years so yesterday I headed off down a very wet M4 to Newbury. The show changed last year (I think) from a 2 day to a 1 day show...I'm not sure what affect this has had on the dynamics of the show but it seemed to be pretty busy when I arrived at lunchtime and was still going strong when I left at 3.

I hadn't gone with a shopping list in mind...I think my parting words to my wife were 'no, there's nothing I'm gong to buy'.  Fatal really...

So the eventual haul included...

The Starter set for the Tanks game from GF9 with some extra tanks (because you can never have enough...)
Some MDF bases
A copy of Michael Howard's 'The Franco-Prussian War'
Some basing stuff from Vallejo and some tufty bits of grass
A copy of Sharp Practice 2 + cards
The last issue of Wargames Illustrated as well as the October issue

The show was good fun... some excellent looking games on display as always.  Here is a selection of photos.  As usual I haven't always noted what they were or who they were by so apologies to people who put on excellent games and have gone uncredited... 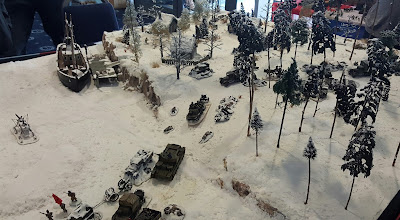 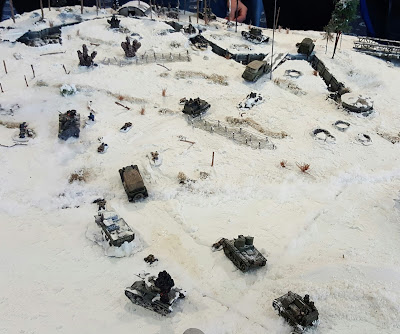 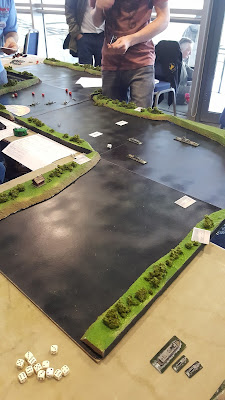 There were lots more games which I failed to snap including an interesting looking Franco-Prussian War game, a modern Black Ops game and many more.  It was nice to see some participation games of Heroes of Normandie going on which I think is an excellent game.  A great day out marred only by annoying traffic jams on the M25 (just for a change) on the way back.
Posted by alastair at 17:16 6 comments:

So last night I managed to play a first game of Congo, kindly hosted by Eric the Shed.  We'd planned a 4-handed game which I was going to umpire as most of the others didn't have a copy of the rules.  Sadly one of our players (and the only other one who had read the rules), Legatus, had a bit of a problem when his car packed in so we were down to 3.

We were going to play one of the scenarios included with the rules, 'The Treasure of Makoko Mbe' which is suitable for more than 2 players, so with a bit of tweaking we had columns from a European force , an African Kingdom group and a Forest Tribe column all heading for the fabled lost treasure in the centre of the table.  The players knew that the treasure was guarded by Fanatical Warriors and that there were areas of Dangerous Terrain around it.  The terrain contained counters which would indicate which corner of the table the players could exit from which incentivised entering the deadly jungle..

It proved to be a very bloody affair, not surprisingly, with the 2 African armies scrapping away with each other while the Europeans sat back and let them weaken each other before moving up and blazing away with their rifles...and if that doesn't sum up European Imperialism I don't know what else could!

Without going into all the scenario details, Rolf's Scouts managed to flush out a very angry gorilla which proved very tricky to deal with, despatching the Scouts before eventually falling to a group of Warriors who at least had the satisfaction of carting it off as loot.  Mark's Forest Tribe Witchdoctor tried casting a spell very early on which immediately went badly wrong and he disappeared in a cloud of evil spirits.  The Europeans advanced at a very steady, civilised pace, pausing for tea and popping off the odd round at a Native.  Rolf had actually done the hard part and killed the defenders of the treasure but was largely wiped out afterwards but did rack up a decent amount of Victory Points in the process.  In the end the Europeans claimed the treasure by default as everyone else was dead or had run off.

We got a few things wrong... I forgot that muskets need to be reloaded and it took me a while to work out exactly which Totem card did what.  I also couldn't find the rules on the Red coloured Actions and what they meant...if the symbol is Red there are some restrictions on what it can be used for.  I also made some errors in the combat results which led to some extra casualties early in the game but at least this was spread equally.  The game was also only meant to last for 7 turns but we ignored this as it was our first outing with the rules.  I'm not sure we'd have got very far if we'd kept strictly to time.

I think everyone enjoyed the rules...there are some things to think about such as table size and characters vulnerability.  Shooting also doesn't appear to cause any Stress to groups, unlike melee which seemed a little odd.  On the whole though an excellent game and one which I suspect will get quite a few outings...if nothing else we need to rearrange a game when Legatus is mobile again!

No photos I'm afraid as I was too busy trying to cope with umpiring and making sense of the rules (not the rules fault but entirely down to my brain!) but there are some pics and a write up on Eric the Shed's excellent blog...  Shed Wars.  Now to paint up my newly arrived African Kingdoms column from Northstar Miniatures... 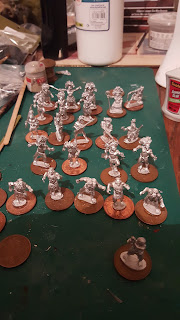 Email ThisBlogThis!Share to TwitterShare to FacebookShare to Pinterest
Labels: Colonial, Congo
Newer Posts Older Posts Home
Subscribe to: Posts (Atom)
"At the age of four with paper hats and wooden swords we're all Generals. Only some of us never grow out of it."