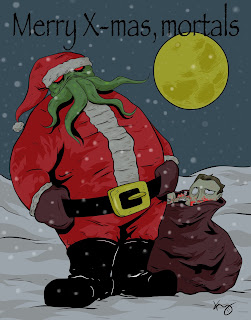 Well, just a few hours to go till the annual festive blow-out begins.  As usual we've made our regards trip up to Glasgow to visit my family.  Normally we'd stay till after Hogmanay but this year we'll heading back early...my son has exams at uni next month that and needs access to WiFi to help with the revision which he wont get at my parents.  The fact that he gets to see his girlfriend and go to parties is probably just a coincidence...

So I hope everyone has a  great Xmas and gets the toys they've asked for.  I'm hopeful I will considering I sent Elaine a series of Amazon links...


Blog posts seem to be getting further and further apart these days...sigh...

Work has been particularly manic over the last few weeks and as part of my job involves sitting at the laptop I'm less inclined to sit at another laptop in the evening posting on my blog, and then feeling guilty that I haven't!  Hopefully the New Year will see things easing up a little although I probably shouldn't have said that.

We've been shivering for the last 5 weeks as out boiler died a slow and painful death.  Although various engineers had managed to coax it briefly back to life ultimately it was terminal and we've had to treat ourselves to a new boiler for xmas.   The lack of heating wasn't too bad but having to boil pots for a wash on a freezing cold morning was a bit miserable.  We now have a lovely boiler and hot water on tap again...bliss!

There's been no action on the painting front but I did manage another game of Star Trek Ascendancy.   This time round I had a better idea of what I was doing and although the brave Federation lost to the Romulans it was a more close result.

Down at Guildford there's a tradition of a big multiplayer game before Xmas,  often featuring Steve's extensive Cowboy collection.  This year was no exception and I even managed to coax my son along since he was back home from Uni.  As usual the game quickly degenerated into chaos with a lot of confusion about who was often which side and much inappropriate use of dynamite.  I did manage to successfully run over the towns 2 Sheriffs with a wagon before careering off down the high street and at one stage I was mistaken for a prostitute...no sarky comments please!

I caught up with the first episode of Time Commanders this evening...this is the relaunch of the BBC series that was on TV in 2005.  If you haven't seen it, the programme basically pits 2 teams against each other in a  large Total War computer game.  In this case the teams consisted of some London based boardgames vs 3 Glaswegians wrestlers...obviously my loyalties lay with the Weegies!  The programmes is presented somewhat bafflingly by Greg Wallace, the shouty greengrocer from Masterchef (although I am given to understand he is a fan of strategy computer games).  The players also have advice (and and bit of basic history teaching) from Dr Lynette Nusbacher and Mike Loades (another very shouty man).  The fun of the game is watching the players fail to communicate and work together and see their plans unravel.

This episode featured the Battle of Zama and without giving any spoilers it becomes a very scrappy affair with a  close result.  Perhaps the best line from the programme was Dr Nusbacher advice that 'Elephants aren't magic...'.   To put this in context they Carthaginians had launched their Nellies on a headlong rampage without support and they died to a man..erm..elephant.

I enjoyed it more than I expected to and of course it gives us a chance to shout at the telly and know that we'd never have made the mistakes the players make...