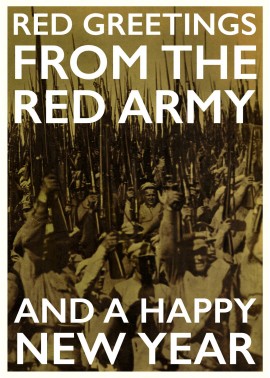 Well, just a couple of hours to go till the big event.  Being Scottish I'm meant to be very enthusiastic about celebrating Hogmanay but I've always tended to see in the bells fairly quietly and tonight will be no exception...a nice bottle of wine and some Laphroaig and Jackie Bird and Phil and Aly on the tv (which will mean nothing to anyone outside Scotland!)

Like all good bloggers I'm meant to review the year at this point and look forward to 2018 plans but that will have  to wait...maybe tomorrow...


I'd like to take the opportunity to wish everyone a good New Year and best wishes for 2018...I hope you all have a good one!!
Posted by alastair at 21:18 4 comments:

Just a few hours to go (in the UK at least) till the big day.  I hope everyone has a truly great Xmas and  you get all the toys you deserve! 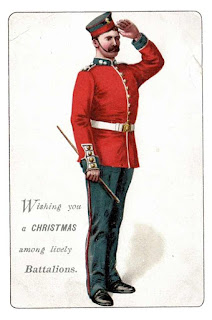 Back in October I signed up for another Kickstarter...this time for the Napoleonic skirmish rules, Forager.  Most Kickstarters I've funded have taken months and months to arrive so it was a pleasant surprise to see this one developed and produced dead on schedule and,  even better, Stand To Games managed to get it posted out in time for Xmas!

The rules are very much small scale skirmish with a lot of characterisation via skills and traits allocated to figures.  I haven't had a proper read through yet... tomorrow I'm off to Glasgow to visit family for Xmas so I figured having some handy reading material might be useful!  The book itself is very nicely produced with a sensible spiral binding and very hefty paper thickness which makes it feel very substantial indeed! 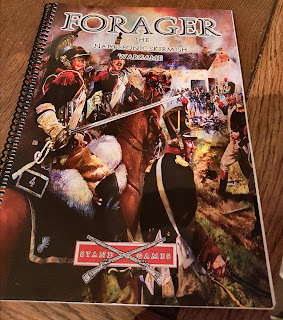 The Kickstarter included some British and French light infantry and El Cuchillo, the Spanish guerrilla leader figure.  There are also some additional Spanish figures which will ship in the New Year.  I didn't sign up for the Add-ons which included Portuguese Cacadores and markers.  The figures are very nice...chunky and a bit exaggerated but very full of character which is ideal for a game like this.

I'm hoping these will make for some good 'Sharpe' style games but I've also been thinking about how adaptable they might be for other periods...especially for the North West Frontier.

I'll post a more in depth review once I've had a chance to read the rules properly.
Posted by alastair at 21:56 2 comments:

I thought I'd plug this event which Mike Lewis at Black Hat Miniatures is planning for next March.  It's a day event in Woking, Surrey for 54mm wargames with up to 6 games being staged.

It's still very much in the planning stages but more info about the event can be found on the excellent Little Wars Revisited site, which is well worth a visit for lots of useful info on games in this scale.

I'm hoping this might be the kick up the arse I need to get more of my 54mm North West Frontier figures painted! 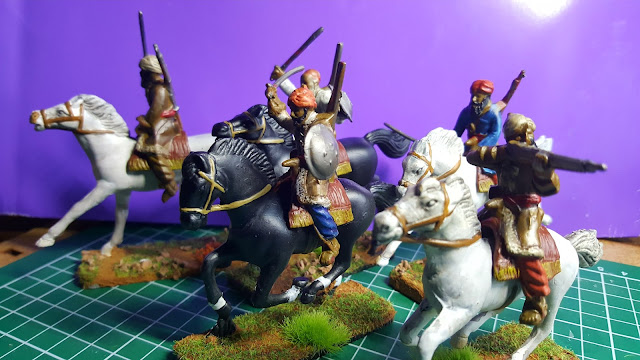 Last week saw the first game in a mini-campaign I've started with Keith (of Armies Army fame).  We're using the excellent Chain of Command rules from Too Fat Lardies to fight out the German invasion of Belgium.  Why?  Well, mainly because we had the figures handy but also because the early war period is a fascinating one...not overpowered with supertanks and with some interesting underrated armies like the French and Belgians.

Keith has done all the legwork in getting the campaign planned out using the TFL 'At the Sharp End' campaign kit and is playing the invading Germans.  My plucky Belgians are hoping to try and last more than the 18 days of the real campaign.  The rules encourage you to name your officers and follow them as the campaign unfolds so my forces are led by Lieutenant Remi, Sergeant Brel and Sergeant Evil named after my favourite Belgians...Georges Remi, Jacques Brel and... erm... Dr Evil from the Austin Powers movies (who knew he was Belgian??!)

The first scenario saw the Belgians responding to reports that Germans had been sighted in Belgian territory near the border with Aachen.  Both forces patrolled out, using the Patrol marker system in CoC which, unsurprisingly, meant we clashed near a small village in the centre of the table 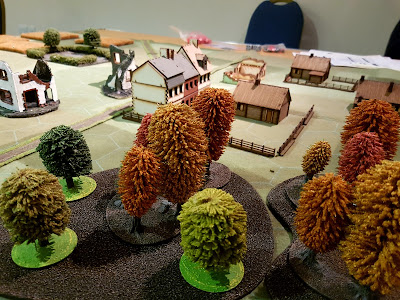 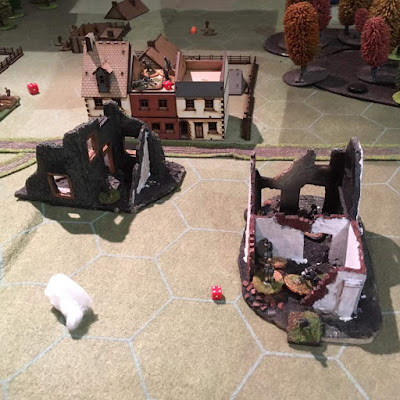 Nether of us had arrived with our full complement of troops.  One of my sections failed to turn up completely and annoyingly I also misplaced my Grenade Launcher section...at least that way they couldn't get shot at!!  The Germans also lost some troops but still looked pretty threatening.  Our sections engaged each other at close range from opposite houses and although the Belgians took some early losses from this and from mortar fire, concentrated Belgian fire broke a German section although another quickly took it's place.

At this point some of our support choices arrived.  The Germans deployed a PzII which was a bit worrying as I didn't have any anti-armour capability other than LMGs.  I chose to bring on a Forward Observer who managed to call in a barrage on the German mortar with pretty devastating effect.  In CoC once a barrage starts in continues until a player manages to end the round by using Chain of Command points which accumulate (if you're lucky) during the game.  I was able to walk the barrage onto the remaining German sections which piled on more casualties.  One of the Belgian officers was wounded and left behind when his section broke but displayed conspicuous bravery by calling in the mortar strike on his position while lying in a pool of blood! 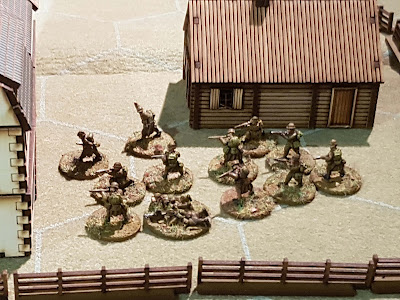 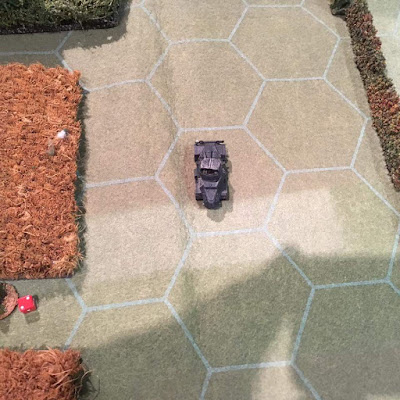 The combined effect of the mortar barrage and fire from Belgian sections forced the Germans back off the battlefield  but reports now indicate that there have been further incursions along the border.  At least my casualties were pretty light with only 1 section taking a real pasting so I should have a fairly strong force for round 2.

Email ThisBlogThis!Share to TwitterShare to FacebookShare to Pinterest
Labels: Chain of Command, Too Fat Lardies, WW2


Well, not exactly a house...it's actually a Japanese Rice store but it has walls and a roof so that's close enough for me.

I bought this 4Ground rice store in October at SELWG to use with my Ronin figures and it has languished with my other purchases since then until yesterday when my wife spotted it and wanted to know why I'd bought things if I wasn't going to do anything with them.  Clearly she doesn't understand about the principles of buying stuff for wargames...these things need a certain time to mature.  Nonetheless I was inspired to make a start on the rice store and built it fairly quickly.

I'm pretty cack-handed when it comes to any form of building things...generally the rule in our house is that it's better to get someone in than to let me loose on any form of DIY and this proved no exception.  Like a lot of the 4Ground kits it has an inner wall which is built first and then lined with an outer and inner lining.  I completely failed to take account of the fact that there is a door and a window on 2 of the walls and managed to put the wrong parts on each side!  As I'd used Superglue rather than PVA this was a bit of a bugger but I managed to prise the pieces off without inflicting too much damage (but covering my fingers in glue in the process)...at least I didn't stick myself to anything...

The store has a Teddy Bear fur roof and my main question is why does mine look like Donald Trump!!!! 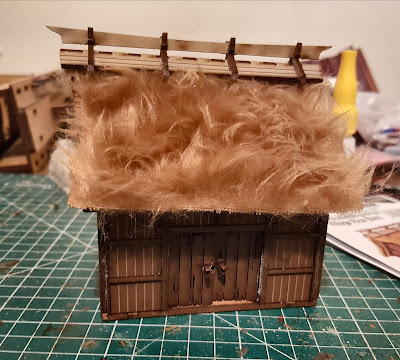 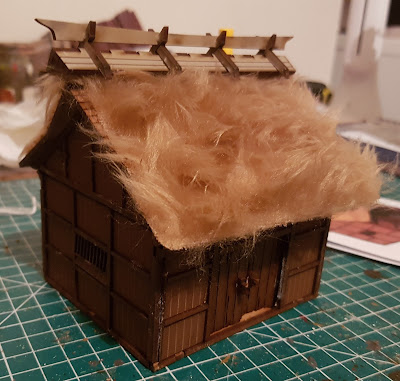 This is the house after the fur has been given a liberal coat of PVA/Water and a bit of a trim...now safely de-Trumped! 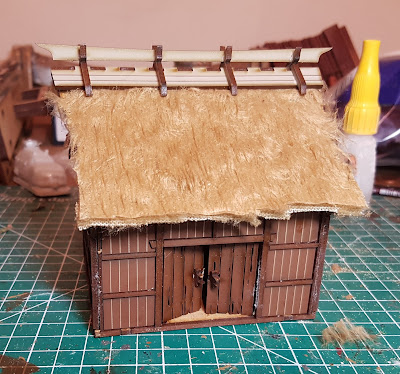 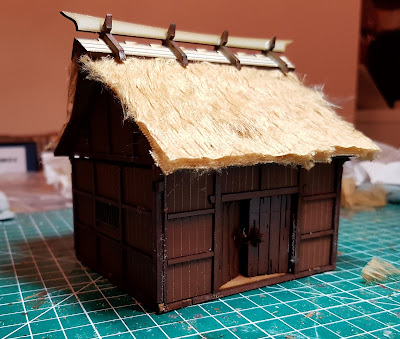 Email ThisBlogThis!Share to TwitterShare to FacebookShare to Pinterest
Labels: Ronin, Terrain
Newer Posts Older Posts Home
Subscribe to: Posts (Atom)
"At the age of four with paper hats and wooden swords we're all Generals. Only some of us never grow out of it."