It's been a chilly week or so since our boiler decided to spring a leak a  couple of weeks ago. I'm no expert but I guessed that having water dripping out of the bottom of the boiler probably wasn't a good thing.   Luckily we're insured for this kind of domestic disaster, since I have no practical skills whatsoever, and an engineer duly came out and diagnosed perished washers.  He then helpfully turned the heating off.  To be fair the thought of water dripping its way through the electrics had worried me a bit and it was a relatively mild couple of days till the next engineer was due back armed with a packet of washers.  Of course it wasn't the same one as before and he immediately diagnosed a different set of problems including a new pump... and  a few more days delay.

This coincided with the weather turning a bit colder and the arrival of Storm Angus.  I'm not convinced by this new thing of naming every breezy day although  did like the approach they took in Scotland a few years ago where they ignored the official name and renamed it "Hurricane Bawbag" (it's a Scottish thing....)

We even resorted to lighting the coal fire and discovered that one of our dogs turns into a quivering wreck when he sees the flames.  The other dog lies in front of it looking quietly smug about hogging all the heat.  We also had a night away visiting our son in Cardiff and stayed in a hotel near Bristol.  I've never been so glad to see a bathroom with a real, live, working shower and bath!!!

The 3rd engineer turned up today and, after a bit of sighing and swearing when he found more leaks than expected eventually managed to stem the floods and get it working again.  It's amazing how reliant we are on the assumption that when we turn the tap on hot water will come out of it!

I took part in a large multi-player game of Memoir 44 down at Guildford a week or so ago.  This was the Sword of Stalingrad set which allows multiple players and a CinC on each side who doles out the precious order cards.  The Soviets are further hampered by having to plan their orders a turn in advance to reflect the helpful meddling of Commissars.  Despite the Germans having a good start and making early gains the Soviets proved tough to dig out of the built up areas and it ended as a narrow German victory (or a close draw according to some of the Soviet players!)

I also managed a game of   Star Trek Ascendancy, the strategic game in the ST universe which sets the Federation, Klingons and Romulans exploring and colonising planets before eventually bumping into each other and either learning to live in peace and harmony or kicking off in a blaze of photon torpedoes and disruptors.  It was a fun game although it took me a few turns to work out what I was doing.  Luckily the other players had played before so kindly coaxed me through the first couple of turns.  The nature of the game also means that it takes a few turns before players encounter each other, giving me a chance to sort of work out what I was doing.  It was a fun game that seems easy to pick up but with quite a bit of depth in the tactics.


I've also finally started painting some of the Conan figures from the recent Kickstarter.  There are 2 big boxes of figures which is quite daunting but I decided that I would aim to paint the main heroes and villains and leave the minions unpainted for now.  I may get round them or alternatively give them an ink wash and leave them as they are.  On first glance some of the figures look a bit lacking in detail when they're straight out of the box but undercoating seems to bring out a lot of detail and the figures are very nice to paint.  I undercoated these in brown  and they're pretty much done.  I'm still undecided what to do with the bases.  The game is played on a series of gridded tiles which feature a lot of brown terrain and I think adding flock and tufts etc to the bases would look a bit odd on  a 2d surface so I may just leave them brown. 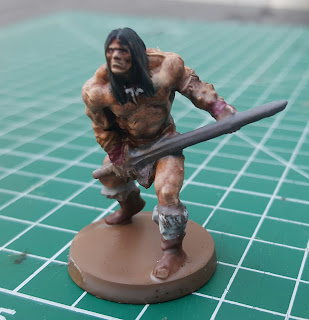 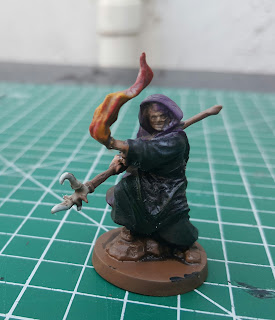 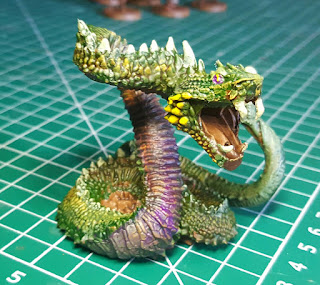 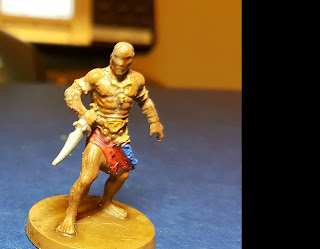 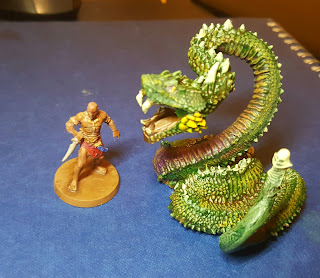 Down at Guildford we started another Heroes of Normandie mini-campaign:  previously we've played through the D Day campaign so this time we've stepped back a few hours and are playing the Sainte-Mere Eglise campaign. The opening game has the US pathfinders trying set up their Holophane signalling lamps and activate their radar to guide in the Paratroopers.  Luckily the Germans were a bit more alert than usual and had some Panzergrenadiers in the area.  As usual with the the scenarios from this excellent game it was a close run thing the Pathfinders succeeded in setting up the lamps and would have activated the radar if a plucky German soldier hadn't take them out with a  well-placed grenade in the last but one turn...unfortunately he paid the ultimate price and was caught in the blast but I reckon an Iron Cross was on its way to his grieving family!  The result of the German victory is that the Paratroop drop over Sainte-Mere Eglise in the next game will be much more dispersed.

I also took part in another big ECW game at Eric the Shed's.  As often happens in these big games you end up losing track of what's happening elsewhere on the table and focus on your own part of the battle.  On my flank we tussled over a village which I managed to hold although ultimately both opposing battalions wore each other out and broke.  My cavalry refused to even turn up for half the game and when they did, again both sides managed to exhaust themselves but at least this left our centre in a position to roll up the Royalist flank by the end of the evening.  As always, great fun with an excellent array of figures.

I have actually done some painting!!  A while ago I'd made a start by undercoating my African tribe figures but hadn't done much more.  They're now pretty much complete...must give them another outing...


I've also made a start painting some of the figures form the Conan boardgame but I'll write more about these in a separate post.

Email ThisBlogThis!Share to TwitterShare to FacebookShare to Pinterest
Labels: Boardgames, Congo, ECW, WW2
Newer Posts Older Posts Home
Subscribe to: Posts (Atom)
"At the age of four with paper hats and wooden swords we're all Generals. Only some of us never grow out of it."