A visit to Eric the Shed's place this week for a game of Saga...something I haven't played for several years.  I've played quite a few games in the past when it was a new and shiney thing but not for a few years...people at the club seemed to find it a bit 'gamey' which it is I guess.


I was even tempted into digging out my Vikings from the loft...they were banished there after falling out of the loft hatch and bouncing down the stairs not once, but twice in the space of 10 minutes!  After the second crash I couldn't bear to look in the box to see how bad the damage was so they've languished upstairs since then.

Actually the damage wasn't too bad...a few broken spears and arms and one figure who had snapped off at the ankles but mostly they were surprisingly intact.  Gripping Beast plastics are surprisingly durable!

Eric had set up a 3 way game which set 2 bands of  rival Viking raiders against some Anglo-Danes defending a hill-top church.  Initially the Danes looked hard pressed as both groups of Vikings converged on the hill although my initial attack went badly, losing a unit of Bondi completely and taking a hit on my elite Hearthguard.  This did manage to take out his archers but it was too costly an attack. 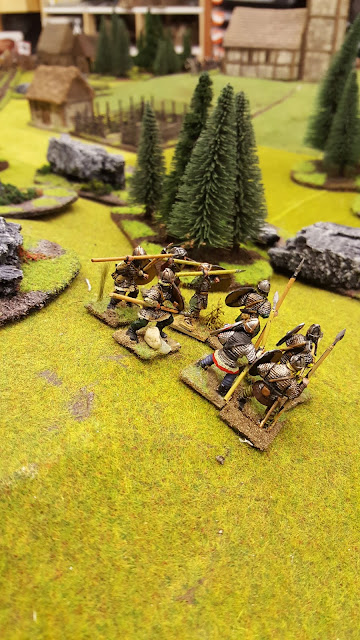 On my left flank I was nervously eyeing up the other Viking band who were pressing the Danes back but I was convinced it was only a matter of time before they turned on me.  My nerve gave out first and my archers turned on the rival Vikings, peppering a unit of Bondi and I followed this up with a charge from my spearman.   Of course this prompted a pretty violent response from the Vikings who unleashed their own attacks leaving both of us weakened and pretty much handing the game to the Danes.  They completed the victory by finally charging off the hill and killing my Warlord....that's what I get for impatience and paranoia!!!

It took a little while for the nuances of Saga to come back to me but it's a great game and it was nice to get out a long neglected army.

Like all raiding Vikings we were well supplied with rations foraged from the enemy....

Email ThisBlogThis!Share to TwitterShare to FacebookShare to Pinterest
Labels: Saga

So that's the Aztecs and Conquistadors finally re-based and completed...well, I say completed...

I came across an unopened box of Aztecs while sorting them out so I'll paint up some of these as extras for the Aztecs and allies for the Spanish.  Nice to kind of finish a project though!

I've also been busy selling off stuff that has been lying in the loft for years.  It's one of those jobs that I've been meaning to do for ages but now that I've started it's been quite fun watching the eBay counters ticking round as bids arrive (usually).  It's been interesting to see what items sell and what are unloved.  Making a bit of cash is a nice bonus although that only holds water if no one asks how much I paid for the items in the first place.

The other danger is that I find things in the selling pile and then decide that actually I'd rather keep them.  I nearly didn't post a set of Warlord Games Romans and Celts which I bought and painted when hard plastics first came on the market...they've never actually seen a game but once I opened up the box I immediately started thinking about keeping them and, of course, I'd need to add some more figures!  Good sense prevailed though and they were quickly photographed and wrapped in bubble wrap and have gone off to new homes where hopefully they'll get some use.  I did weaken though when I came across some 15mm Marlburian figures...I was going to sell these (remnants of a club project that never got off the ground I think) but then remembered that I'd  enjoyed researching and painting the various regiments so they've been put aside and spared trial by eBay.

Gaming-wise I took part in an excellent and rather bloody Pike and Shotte ECW game at Eric the Shed's earlier in the week in which he'd decided to extend his already huge table to just under 20'.  Although the table has always seemed more than big enough this did mean that even with 5 of us playing, there was plenty of room for manoeuvre...or lack of manoeuvre in my case as I repeatedly failed to get my forces moving for several turns. This actually proved a blessing in the end as it meant that my opponent had moved away, responding to the carnage in the centre of the table and allowing me to get into a decent position relatively undisturbed and eventually win my bit of the battle at least...great fun!
Posted by alastair at 17:39 3 comments:


More re-basing...it's quite therapeutic once you get into a routine!  Strip the figure off the old base and glue it to the next...add some Vallejo textured basing stuff, give the figures an Army painter dip, add some flock... and repeat...

I've now re-based around a 125 Aztecs and 40-odd Spanish. I'm finishing off the remaining 20 Aztecs and that will leave another 44 Spanish....phew.  I've also discovered a couple of new boxes of unpainted Aztecs that I must have bought somewhere.  Although I already have lots of Aztecs I'll probably add a few more as Tlaxcalan allies for the Spanish

I spotted that the last issue of Wargames Illustrated has an adaptation of Congo for a South American setting and this includes cards etc for Conquistadors so I think an expedition to El Dorado might be on the cards! 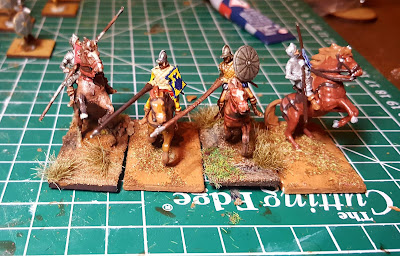 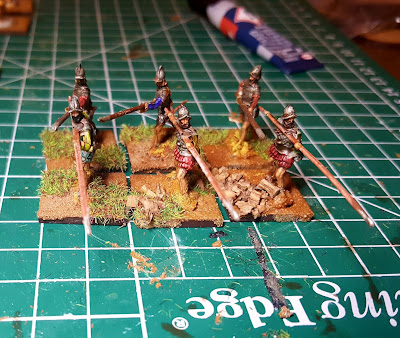 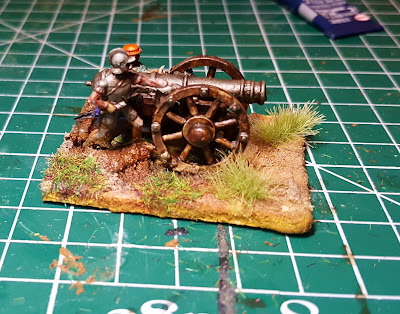 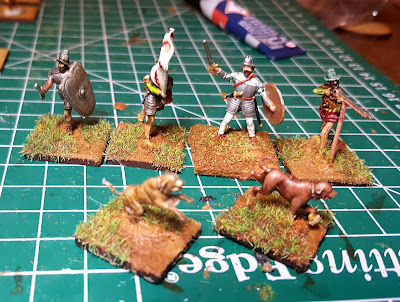 Email ThisBlogThis!Share to TwitterShare to FacebookShare to Pinterest
Labels: Aztecs

No, I haven't been spring-cleaning my Aztecs....I suspect that would be a bit of a chore given all the blood and gore from the human sacrifices.

No, I've been having a bit of a clear out of rules books, figures and boardgames.  I finally came to the conclusion that there is far too much stuff stacked up in the loft so a major clear out is in order with a  pile of stuff headed to eBay.

I've also finally resumed a couple of projects, beginning with sorting out the large amount of 20mm Aztecs that I'd acquired a few years ago.   I'd made a bit of a start on these some time ago but they've then  languished under my desk so I've spent a therapeutic evening rebating lots of figures.  They were actually quite well based already  (seriously...they seem to have been coated in concrete!) but I wanted to have them individually based.

I've now used up all my 20mm bases from Warbases and have textured all the bases and dipped a lot of the Aztecs in Army Painter shade.  More bases are on order as well as some movement trays.  There are a few Conquistadors that need rebasing but a lot of progress has been made! 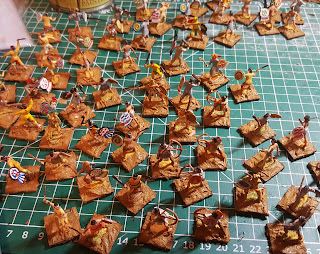 Email ThisBlogThis!Share to TwitterShare to FacebookShare to Pinterest
Labels: Aztecs
Newer Posts Older Posts Home
Subscribe to: Posts (Atom)
"At the age of four with paper hats and wooden swords we're all Generals. Only some of us never grow out of it."