A Song of Ice and Fire

Last night we played a trial game of the Song of Ice and Fire game from CMON.  This was using the starter set which came out in 2018 and features Stark and Lannister forces. 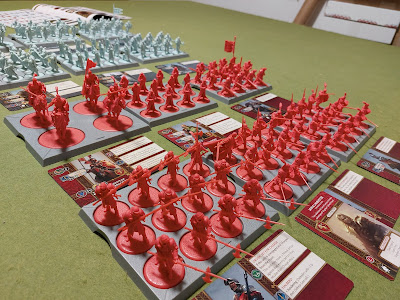 The starter set comes with a load of very nice figures (as you'd expect from CMON) but my opponent Andrew had also added in some extra troops to beef up the forces.

The rules are relatively simple.  Figures are assembled on the provided movement trays in ranks... as you take casualties and ranks are whittled down, units become less effective.  Each unit has a card detailing all of its stats and special abilities.  These reflect the factions character so the Starks are pretty aggressive and good for attacking while the Lannisters seemed more sneaky and better armoured (or at least that was my impression). 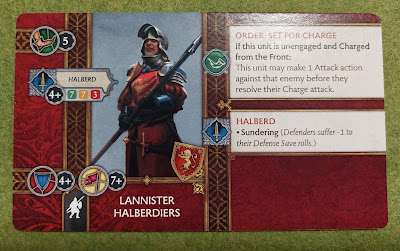 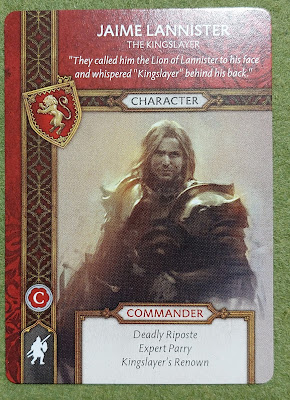 Units can also have special characters attached who have their own bonuses and abilities, so the Starks were led by Robb Stark and the Lannisters by Jaimie Lannister (booo!!).  You also have non-fighting characters who can be deployed onto the Tactical Board where they can give bonus moves, restore casualties, force opponents to take a morale check etc.  This was a nice touch and gives a good role to non-military characters like Cersei Lannister and Sansa Stark.

Finally each player has a hand of cards to give bonuses or to penalise your opponent.  So, quite a few special abilities to remember (or in our case, forget until it was too late!)

In our game we went for a very simple, balanced game with no confusing terrain since it was our 1st game.  The mechanics mostly worked well... there are a few bits which were unclear although I suspect there has been a lot of clarification online since the game first came out.

The Lannisters advance quickly towards my Stark army with their Knights and Halberdiers leading the way.  The Stark army (with some Umber allies) held back to allow my archers to cause some damage first.  Andrew's missile troops were an annoying unit of Pyromancers armed with Wildfire!

My light cavalry unit advanced wide on the flanks, making the most of its extra movement and charged a Lannister force in the flank, repeatedly breaking off and retiring before harrying them again and again.  I felt this worked really well as a way of reflecting the role of Light Cavalry.
The Lannister Knights were also very effective, causing carnage despite being worn down to 1 man by the end of the game.  Maneuvering and placing flank attacks seemed to be key although I suspect if we'd had more terrain this wouldn't have been so easy to achieve.  Several of my units were badly beaten up by flank attacks  and despite my best efforts to reinforce losses the tide turned in the Lannisters favour.  The nasty Pyromancers even took to lobbing Wildfire bombs into melees regardless of the risk to their own side!  In the end it was a convincing Lannister win although it was pretty bloody on both sides , which is kind of what you'd expect for a Game.of Thrones battle.
So, thoughts....  I really enjoyed the game.  It's pretty simple and there were bits that I thought could be expanded (morale tests for example) but on reflection I think its better leaving these simple  and uncomplicated.  The game is what it is... a quick and fun Game of Thrones bash which reflects the books/TV series well and captures  the flavour.  Adding too many extras to it risks losing that.  I immediately thought that the mechanics would also work well for non-GoT settings... Arthurian or Wars of the Roses for example.
The biggest drawback of the game is the price... the starter set retails on Amazon at £109 although I'm sure it can be found cheaper.  A cavalry unit of 4 figures is an eye-watering £25!  Definitely one to play again though.

Last week saw the penultimate Wars of the Roses battle at Eric the Shed's ... Tewkesbury.  As usual there is a great write up on Eric's blog.  It was a really close game which went down to the wire.  Bosworth next!

And then this week we moved to the Sudan and the battle of El Teb.  Again, a close run game with both sides pretty much exhausting themselves (although to be fair the Brits were broken first so it was a Sudanese victory...questions will be asked in Parliament and there may be some terrible Victorian poetry written to commemorate the defeat...)

In other shock news I have actually picked up a paint brush and done some painting for for first time in months.  When I looked out my brushes to make a start on my Late Romans they looked like a 2 year old had been mashing them on the table and they were in terrible state so it was off to the excellent Gamers Guild in Redhill to restock on brushes and some paints.  A great little shop which is a bit of a rarity these days

Email ThisBlogThis!Share to TwitterShare to FacebookShare to Pinterest
Labels: Colonial, Never Mind the Billhooks, painting, Wars of the Roses
Newer Posts Older Posts Home
Subscribe to: Posts (Atom)
"At the age of four with paper hats and wooden swords we're all Generals. Only some of us never grow out of it."