Back last Autumn I'd posted several reports of the Wars of the Roses games that we'd been playing through, hosted by Eric the Shed.

Last year our idea for a WotR campaign had morphed into a plan to play through each major battles in turn using the excellent Never Mind the Billhooks rules.  There's lots of background info on Eric's blog and my posts can be found here and here

As with so many things, Covid put the games on hold but now we're allowed to get back together so we've resumed the sequence.   We picked up where we'd left off with the Battle of Wakefield: there are posts about it on Eric's blog here and here.

Our next game is a bit out of sequence however: we always knew that Towton was going to be too big to play out in an evening so we had to find time for an all-day extravaganza.  This battle let all 5 of the regular players combine our figures, bringing over 1500 miniatures onto the 15' long table for a 6 hour marathon (with a brief pause for pizza!)

I'll leave it to Eric to post all the details of the refight on his blog in due course... it only seems fair since he did all the work in bringing it all together and hosting the game.  I won't provide spoilers for the result but I can say that it really went down to the wire with the battle being decided on what was effectively the last throw of the dice.  We used Never Mind the Billhooks with a few house rules including a mechanism for determining wind speed and direction and snowfall.  The wind at Towton played a significant factor in affecting the effectiveness of each sides arrow-fire and this proved the case in our game with the Lancastrians being severely hampered by firing into a strong wind.  The heavy snow also affected the arrow fire but also limited the effectiveness of commanders who struggled to be seen in the wintry conditions.

I'll post a link to Eric's blog post when it eventually gets published but in the meantime here are a selection of photos from the Lancastrian side of the table.. 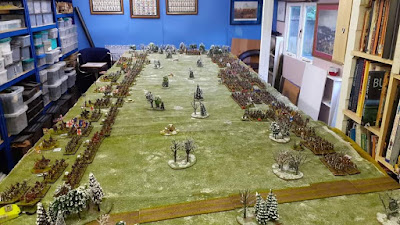 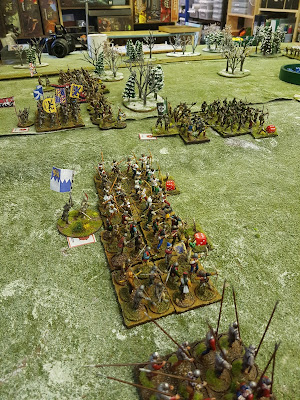 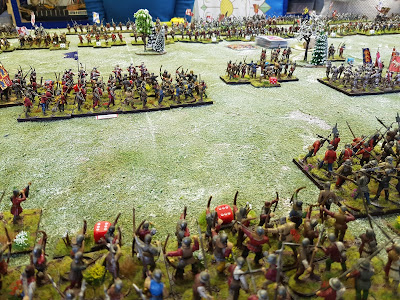 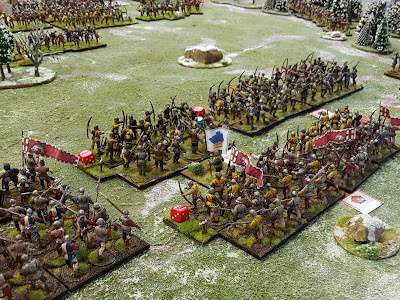 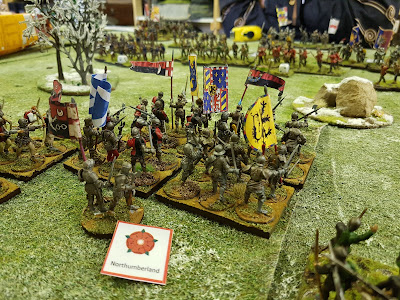 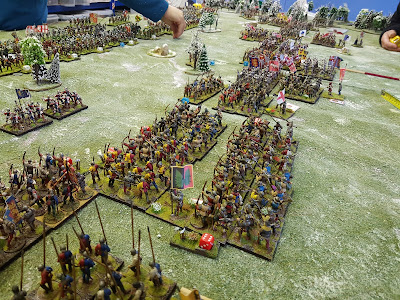 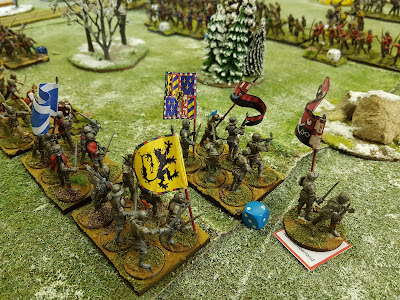 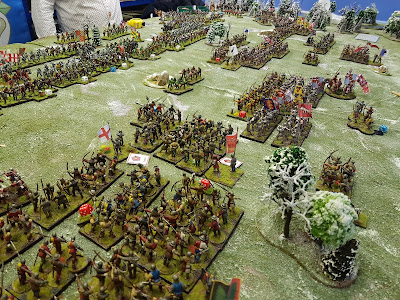 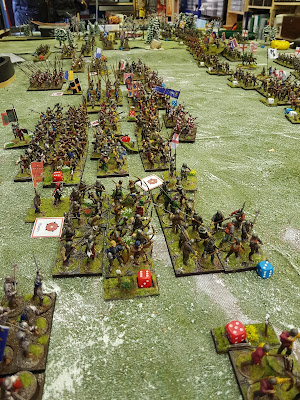 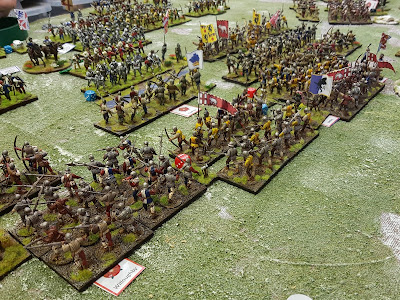 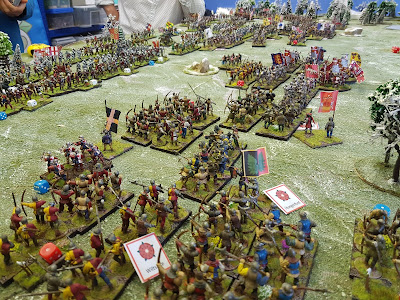 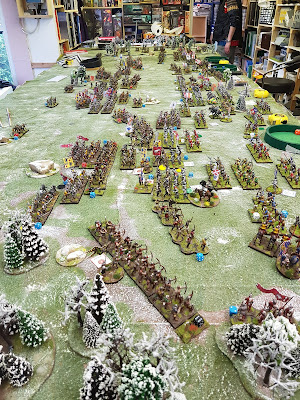 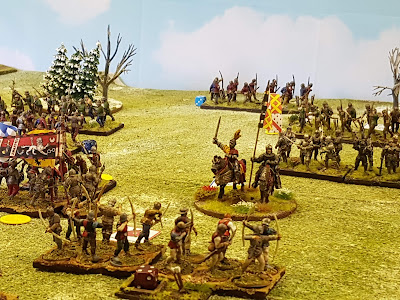 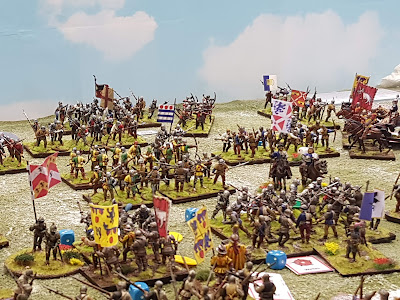 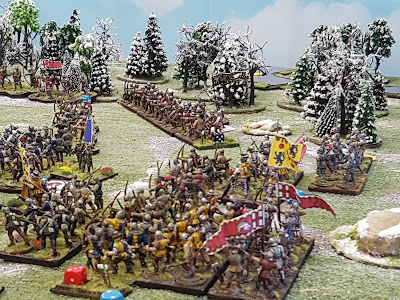 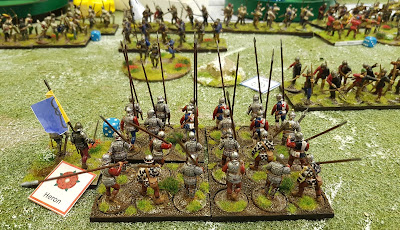 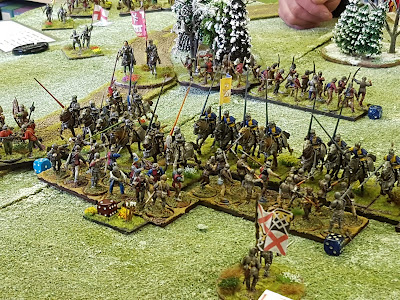 Email ThisBlogThis!Share to TwitterShare to FacebookShare to Pinterest
Labels: Never Mind the Billhooks, Wars of the Roses

Vikings - battle at the river

Now we're allowed out and can meet up with friends indoors it's time to start games again!

First up is a game with my friend Anthony, using Tabletop Battles rules and his excellent collection of 40mm Saxon and Vikings.

I hadn't come across these rules before but they are designed to be scale and period agnostic, which is a bold ambition, and are grid based.  Essentially they are rather like a gridded version of DBA which is no bad thing as it removes a lot of the gamey geometry moves that you can get with the WRG rules.  The other difference is that instead of using a d6, these rules use a d12 which brings big changes to the probabilities of combat results (scoring more than your opponent causes a push back, doubling their score destroys the unit).  Combats are combined where units are adjacent which means there is the potential (especially with the d12 scores) to double your opponents score and remove swathes of the army in one go.  We were a bit worried about this as we thought the game could be over very quickly but actually this wasn't the case at all and we had a back and forth battle which filled the whole evening.

As we hadn't tried the rules before we stuck with balanced armies and tried out the full terrain deployment mechanism.  This gave us a shallow river running across the middle of the table which was fordable but would slow units down.  There was a bridge and a ford and it looked likely that these would become the focus of the game.  We also had a small village on my left and a wood on my right.

On my left flank my archers piled into the built up area, forcing back some of the approaching Saxons with bow fire.  The Saxon archers managed to cross the river but were quickly destroyed by a Viking warband.  This flank quickly turned into a stalemate with neither of us willing to risk the crossing.
The centre was held by the elite Hearthguard but, again neither side was willing to try crossing and being disadvantaged by the river.  It was the right flank that would prove decisive.

On the right the Saxons bravely forced the river, driving the defending Vikings back into a small wood.  The Saxons charged again but were repulsed and forced back into the water.  Really this was the critical point of the game:  if the Saxons had instead been able to destroy the Viking warbands that had fallen back into the wood (and which were therefore fighting with a disadvantage) it could have been all over.  There followed a series of clashes at the riverbank before the dice gods smiled and the Saxon units were destroyed.  Anthony did his best to redeploy his Hearthguard onto the flank to shore up the hole that had appeared in the line, but I now had the advantage of numbers and was able to cross the river (presumably on a bridge of Saxon dead...) The Saxons were now outflanked and driven back with losses mounting.  As we reached the 8th turn which marked the end of the game the demise of another Saxon Warband gave me the points needed for the win. 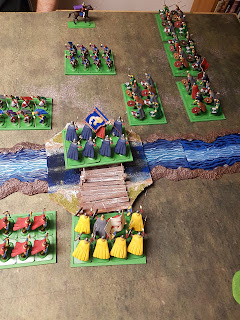 All in all a great game... I've always liked DBA as a system and the addition of a grid makes a real difference.  I'm not sure if the rules can really stretch through to the 20th century as they claim but it would be interesting to try them out.  I'm already thinking these would be a good set to try out with my 54mm Franco-Prussian paper soldiers (when I get my finger out and cut out enough figures!) 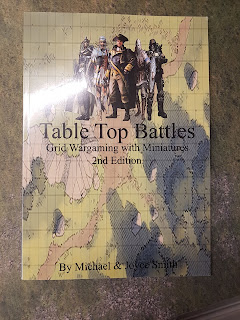