Oooh... and just to add to my Frostgrave temptation they've gone and announced a second box of plastic figures.... 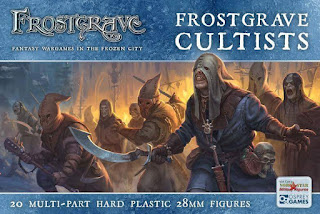 These are scheduled for release in November
Posted by alastair at 15:37 2 comments:

Although I've managed to play games pretty much every week over the last few months I've done very little in the way of painting or planning.  I occasionally get these spells where I lack motivation and in this case it was made worse by a couple of factors.

Firstly my thumb being chomped on by a dog made doing much a bit tricky for a few weeks...its now about 8 weeks on and I still have to wear a splint on it for part of the day and can't bend it very much, but I can use it a bit now.

I also lost my job at the end of March and have been on a prolonged spell of 'gardening leave'...although this sounds like the ideal chance to catch up on all  those projects that have been on the backburner for a while I was pretty depressed and couldn't sum up any enthusiasm to get started.  I'm now feeling a lot more positive (not least about being out of the company I'd been working for!) and have a new job lined up beginning next month which I think is going to be really positive and rewarding.  So onwards and upwards...

Since it's a fresh start (my wife starts a new job at the same time) obviously what I need is a fresh project to get stuck into.  Yes, I know there are assorted unfinished ones lying around but there's nothing like seeing something new and shiny and saying "this is exactly what I need to begin collecting!"  And so to Frostgrave...


There have already been lots of posts about this new system from the Osprey stable on blogs...it's clearly what all the cool kids are playing... and something about it tempted me to splash out on the fairly cheap rule book. It comes as a hardback with 136 pages.  As you'd expect it's a very nicely produced thing with plenty of illustrations.  The game pits opposing groups of fantasy types led by wizards in a world full of ruins and snow.  To be honest I haven't paid too much attention to the fluff that fills in the back story as I suspect I'll largely ignore it.  Groups are generally made up of a Wizard (with an accompanying Apprentice who seems to be optional but pretty important) and then a small group of assorted odds and sods including rank and file soldiers, knights, thieves, barbarians etc.  Wizards come from one of 10 schools of magic which influences which spells and abilities they and their apprentices have.

As well as turning your opponents into frogs and toasting them with fireballs the object is to snaffle up items of treasure which is dotted around the table and get them off table and presumably to the local wizardy marketplace.  There is then a campaign system which allows parties to grow in strength and gain items etc.  I've read conflicting reports of this part of the game, suggesting it may need some work.

The game reminds me very much of a tabletop skirmish version of 1st edition D&D: this is in no way a bad thing!  Games take place on a relatively small table and the small number of figures makes it an ideal project to quickly assemble forces.  I was suitably impressed and have also bought some of the figures that have been produced by Northstar for the game.  Although there is a suitable wizard for each school of magic I decided to buy a couple that I liked the look of and not worry too much what they are actually meant to represent and have a Witch and a Thaumaturge with their respective Apprentices.


I also bought a set of the Frostgrave Soldiers which look like excellent value.  These allow you to build a very varied bunch of adventurer types armed with a mix of weapons to suit.  I think I'll also be raiding my son's unused collection of Warhammer figures for Empire troops, ogres etc  who might suit as cannon fodder and monsters.

Nothing's been painted up as yet but I do finally feel motivated enough to break out the superglue and paints!!!
Posted by alastair at 21:55 3 comments:

Email ThisBlogThis!Share to TwitterShare to FacebookShare to Pinterest
Labels: Frostgrave
Newer Posts Older Posts Home
Subscribe to: Posts (Atom)
"At the age of four with paper hats and wooden swords we're all Generals. Only some of us never grow out of it."