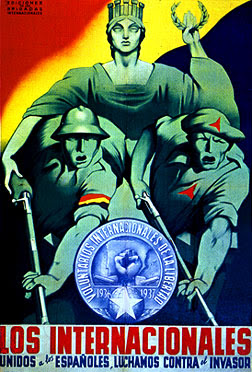 Last week saw a rare outing of my Spanish Civil War armies in a game of Chain of Command.  I still think CoC are the best platoon level game I have come across and the Lardies produced an excellent Espana supplement with details for all the factions involved.

We played out an Attack/Defend scenario with the evil Moroccan Regulares (boo!) assault in a small village held by some brave International Brigade troops (yay!).

The Moroccans were attacking from the top of this picture towards the bridge... 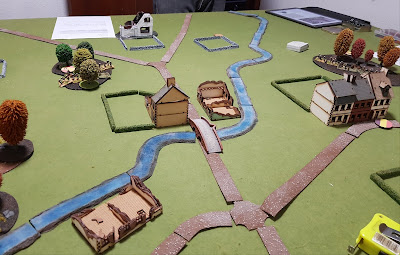 They deployed in the woods and faced fire from the Republicans in the village... 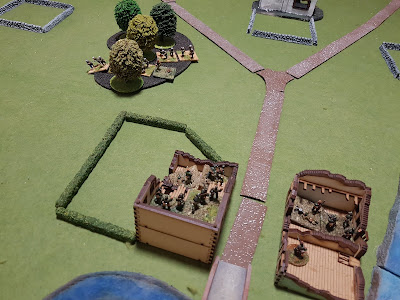 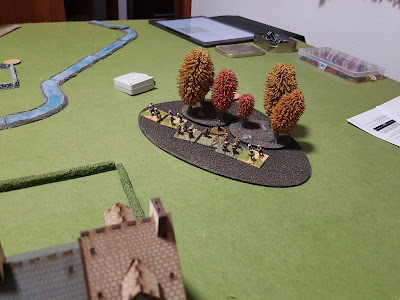 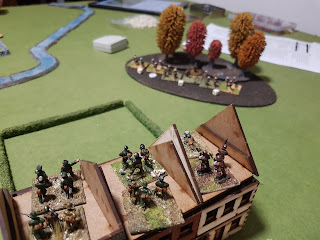 The Regulares had deployed a PzI and an infantry gun as support.  The tank was a threat as I hadn't been able to deploy my own artillery  for several turns.

The gun was particularly annoying as it took some very effective long range shots at the troops sheltering in the village.

The Moroccans were finding it difficult to drive the Republicans out of the buildings although they did see off a mortar section  which had carelessly deployed without it's mortars: the Republicans have to buy their support weapons like LMGs and mortars and I'd spent all my points on a pretty armoured car instead!

The Constructora  A/C finally turned up and sped over the bridge to provide some fire support: 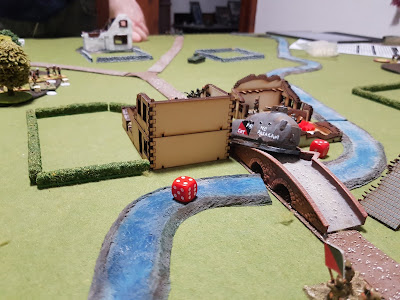 My gun had also finally got into position but was quickly silenced by rifle fire. 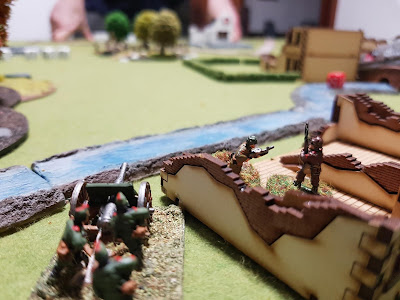 The annoying Fascist artillery then took a long range shot at my armoured car and immediately knocked it out! 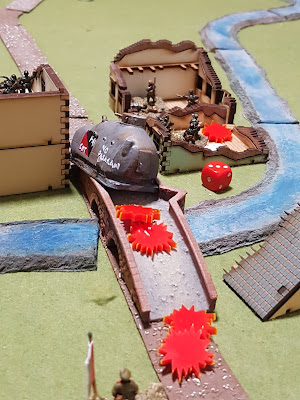 The broken mortar section fled back over the river... 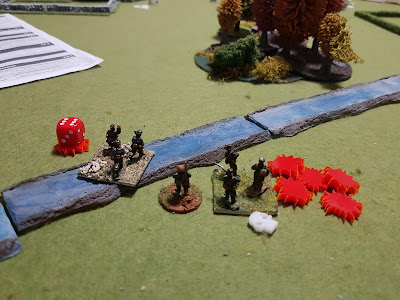 ...but the IBs still held the village and the bridge.  The Republican morale had dipped dangerously low but the Moroccans infantry was now beginning to waver.

We decided it was a close Republican win but only because the Moroccans didn't have the troops left to seize and hold their objective.  The Republicans would definitely need reinforcing if they were to remain in control for much longer.

Nice to get the armies out again.  I thought I'd re-based these to individual bases but obviously hadn't... most of them are still on 3 figure bases so I may add this to the to-do list.
Posted by alastair at 20:59 2 comments:

Valhalla and some new projects


On Sunday I ventured down the A3 to Aldershot for Valhalla, a local show put on annually by the Farnborough Wargames Society.  I haven't been to this show for years... partly because it always falls on Fathers Day and family things tend to be a priority but also because the last couple of times I visited (10+ years ago) it was very small and not much caught my interest.

This year was slightly different:  my son is still away at uni till the end of the week which meant I could go guilt-free, and I had a couple of bits and pieces that I hoped to buy.  The show had relocated from the last time I visited and it  is now held at a community centre next to a school and leisure centre.  Although I found the address easily enough the actual building was a bit harder to track down until I spotted the sign sellotaped to the door... 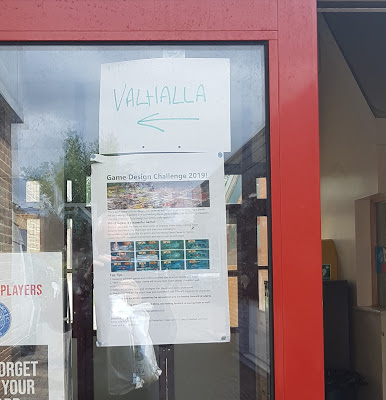 ...perhaps a more prominent sign would be a good idea!

This is a very typical local club show with several traders and a few demo/participation games on show.  Given the small size of the show there was a relatively well stocked bring and buy and the end of the hall hosted a DBA competition.

There were 14 or so traders with a pretty decent range of goodies...lots of Warlord products on a couple of stalls which was what I had been hoping for.

The Society of Ancients were there demoing a boardgame...Pandemic, Fall of Rome (I think...I got distracted talking to someone from the Guildford club).I managed a few snaps of games.  I missed the game of Sharp Practice as they were tucked in a corner.


My shopping was confined to a couple of boxes from the Warlord Games stand.  Although we're never really finished with projects, I have recently managed to paint up everything I had for Cruel Seas and Blood Red Skies and have been pottering, trying to complete odds and ends that have been hanging around. The temptation to start a new project has been growing and so, I finally gave in. And if starting 1 new project is good then starting 2 must be twice as good!

So my new plans are to build armies for the American War of Independence (probably for Rebels and Patriots or Sharp Practice) and armies for Chain of Command in the Far East.  My normal inclination is go to 15mm or even 6mm but for some reason both of these feel like they ought to be in 28mm...no idea why!  So my haul from the day was some paints and a box of AWI British and a box of Japanese... 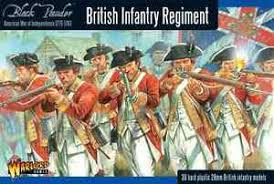 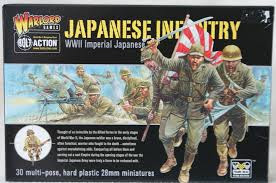 More on these once I get my finger out and get started...
Posted by alastair at 22:57 3 comments:

This year we're off to sunny Spain!


On Monday I have a game of Chain of Command lined up, which I haven't played for some time.  This is going to be a Spanish Civil War bash with the dastardly fascists taking on the brave heroes of the Republic (clearly I have no bias at all in this affair!).

In preparation for the game I've finally gotten round to painting this Peter Pig armoured car.  I've had it sitting around for at least a year and, for some reason, never actually painted it.  It is a Constructora Field A/C, also sometimes called a Barcelona or Camion Blindado 4 x 2 No.8 and was produced in Barcelona. 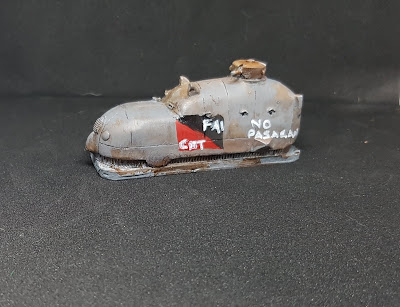 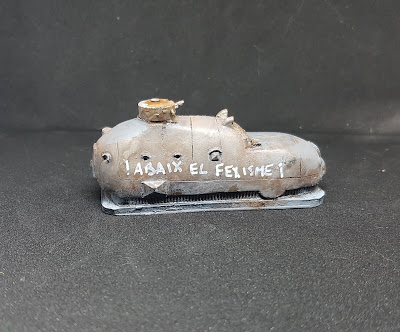 It's a great model from Peter Pig in resin although it has a really thick base moulded onto it.

It does have a strong resemblance to an Anarchist version of a  Hungry, Hungry Hippo... 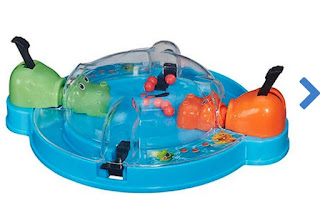 Ive also made up some suitable Patrol Phase markers for the game...

Back in April at Salute I finally gave in a picked up some of the Oathsworn Miniatures Burrows and Badgers figures along with a new set that Northumbrian Tin Soldier were launching based around characters from the Wind in the Willows.

This is an odd choice of figures which I'd been thinking about for ages.  looking at my group of gaming friends I cant see many being up for a woodland skirmish with squirrels and foxes but the figures are really nice and have a huge appeal. I eventually gave in and decided that, even if they don't see action in a game I quite fancied painting them up anyway.  The sculpts are all really lovely and a real pleasure to paint.  I can definitely see myself picking up more of these in the future.

Email ThisBlogThis!Share to TwitterShare to FacebookShare to Pinterest
Labels: Burrows & Badgers, painting
Newer Posts Older Posts Home
Subscribe to: Posts (Atom)
"At the age of four with paper hats and wooden swords we're all Generals. Only some of us never grow out of it."