As always Cavalier at Tonbridge in Kent marks the start of the show season for me.  It's one of about 4 that I try and get along to and it's only a 45 minute drive although this does involve the M25 so the actual journey time could be anyone's guess.

It's not the biggest show...in fact it's the smallest of the ones I go to....but it's usually fun and there are a decent showing of traders to tempt me.  Actually my haul this year was very small...a couple of Osprey rulebooks: Chosen Men and Pikeman's Lament.  I would have picked  up another Osprey, Rogue Stars, but when I went back to the stand where I'd seen a couple of copies they'd both gone.
I nearly bought a boardgame but resisted and didn't feel the urge to buy any more figures or terrain.  I'm planning a bit of a cull in the loft with quite a bit headed to EBay in the near future as there is too much up there that hasn't seen the light of day in years... mainly rules and boardgames I think but there are some figures on their way to a new home too.

Here is an assortment of photos...as always I've tried to remember who was putting on the game but didn't always get the details so apologies to those I missed...

On an unrelated (but still vaguely wargamey) point, we went to see The Divine Comedy at the London Palladium this week...one of my favourite bands.  Here's a picture of Neil Hannon in full uniform...he didn't explain why, although their latest album includes a song called Napoleon Complex and one about Catherine the Great, and lets face it...who needs an excuse to dress up!

I'm tempted to post this to the Napoleonics boards on TMP and ask about the accuracy of the uniform but I suspect it would cause apoplexy among some of the denizens over there! 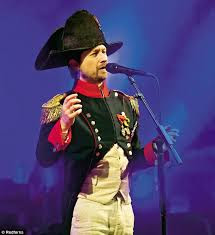 Bits and Pieces (and storage solutions)

There's been a bit of a lull in posting for the last few weeks but I've been busy in the meantime with some games and a spot of semi successful building.

My paints (mostly GW paints as they're easy to get) tend to be chaotically chucked in a large storage box which means it can take ages to find the one I want.  I came across a Kickstarter deal for a self-assembly storage box from Warmage.de and rather rashly bought one

There were various options for GW or Vallejo style paints and varying sizes so I went for the standard GW one.   There were also options for a lamp, brush storage etc which I left out.  Building things, and any form of DIY in general isn't my thing...I'm very much of the "get a wee man in" school of DIY but I thought I'd give it a go and actually it wasn't too bad... the various stages are shown below and it all seemed to work!

The only bit that I still haven't got to grips with is the locking mechanism which consists of 4 pegs which slide through and twist, locking the lid.  For the life of me I can't get these to either go all the way through and/or twist but it may be that I'm being too gentle.  If all else fails a couple of elastic bands work just as well, even if they aren't as aesthetically pleasing.  Despite the fail on the locking device, which may well be down to my construction techniques rather than the design, I'm pleased with it and it should help organise some of the clutter. 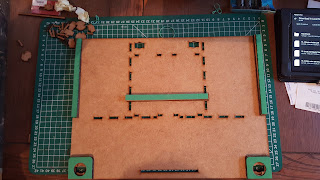 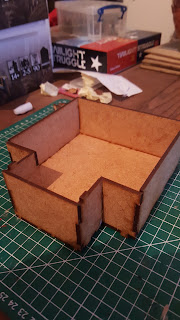 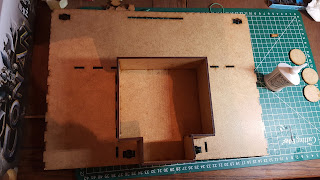 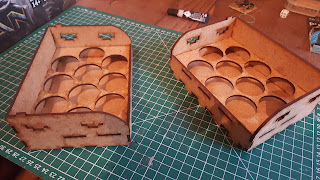 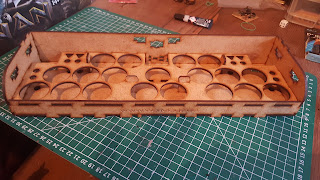 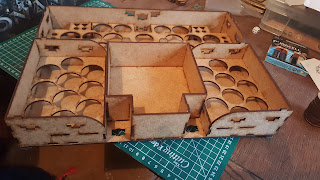 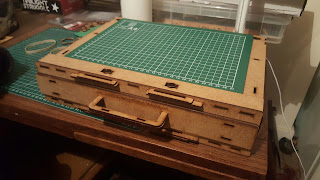 I've also managed to fit in a few games.  I've had a couple of games of Conan, both of which were very enjoyable.  I played the same scenario twice, once as a player and once as the Overlord/umpire.  In the first game we nearly succeeded in escaping from the clutches of some evil Picts with the Princess and the head of their leader but fell down at the last hurdle as the turn limit counted down.  On the second outing (as Overlord this time) the players took their time getting organised but managed on the very last turn to escape the village and win the game.  In both games the mechanics worked really well and there weren't too many uncertainties in the rules.

There's a review of Conan in the latest Tabletop Gaming magazine which praises the game mechanics but is very critical of a couple of points.  The 1st of these I definitely agree with which is the lack of a campaign system or even an attempt to link the scenarios together.  Players acquire treasure from chests etc in each scenario and it would nice for these to have some meaning beyond an immediate fix of health points.  This shouldn't be too difficult to introduce if wanted though.

Their 2nd criticism is a bit more complex and is around the generally racist and sexist tones of the Conan universe.  Undoubtedly the books are both racist and sexist and the scenarios certainly suffer from a lack of strong female heroes apart from Belit.  The Princess figure only seems to exist to be rescued.  A number of the enemies also suffer from racial stereotypes as well.  Now, as a dyed-in-the-wool lefty I do get the issues that this throws up but I can't help but think that a game set in the Conan world needs to reflect the books.  Perhaps more effort could have been made to challenge some of the stereotypes though.  Food for thought perhaps.

Interestingly I bought the game as a Kickstarter and I happened to see it (without all the Kickstarter bonus bits and pieces) in Static Games in Glasgow today at an eye-watering £92!!  When did everything get so expensive!!???


Finally last week I had another game of Star Wars Rebellion and despite starting earlier than usual we still didn't quite get to a conclusion.  Still excellent fun though.  I really enjoy the mission section which does give a very cinematic feel as you despatch Princess Leia or Boba Fett etc.  on missions to stymie the enemy or gain rewards.  By the end of the evening I'd managed to increase the Rebels reputation and was only a few points from a win, but the Empire had a fleet sitting in the system adjacent to my Secret Base (which luckily remained secret) and I suspect they would have discovered it in a turn or 2 so a very close ending. 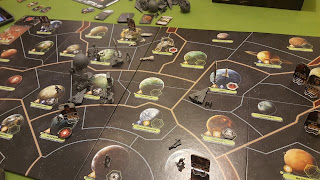 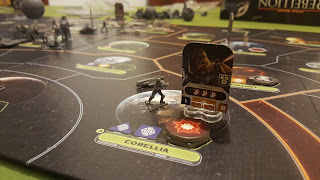 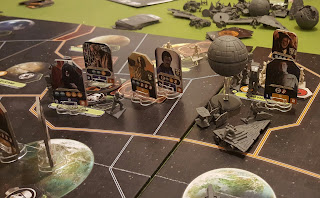 Email ThisBlogThis!Share to TwitterShare to FacebookShare to Pinterest
Labels: Boardgames, Conan, Star Wars
Newer Posts Older Posts Home
Subscribe to: Posts (Atom)
"At the age of four with paper hats and wooden swords we're all Generals. Only some of us never grow out of it."