Another Black Powder game at The Shed this week....link to Eric's Blog .  We played out a Peninsular game with British vs French, struggling for control of 2 villages.  Thanks to Black Powders speedy cavalry rules I managed to lose my main artillery almost straightaway when it was ridden down by cavalry without even getting the chance to unlimber!

My main infantry brigade was the forced into square by the menacing cavalry before being hit by 2 French columns...somehow the doomed square managed to hang on for several turns and eventually forced the attackers back...to be honest some very lucky dice rolling saved my bacon.

My cavalry meanwhile had crashed into their opposite numbers on the French flank resulting in both Brigades being quickly battered and needing time to recover.

By this point the other British brigades had manoeuvred out of a bottleneck and into position to attack and the French had lost enough units for us to claim the day, despite the Brits being pretty battered everywhere.

It struck me afterwards that villages and towns often become unduly important in games...in this case both sides raced to control the 2 villages and committed lots of our troops to try and achieve this or to dislodge the occupiers...both sides might have been better employing them elsewhere on the table rather than feeding them into the meat grinder.  I suspect this also happens in the real world...shades of Hougoumont!  Maybe a lesson to take away for the future...

Thanks as always to Eric for laying on a great game!

Posted by alastair at 22:35 No comments:

So Waterloo has come and gone and just about everyone seems to have been playing some kind of refight over the last week or 2 (I'll leave you to work out the title of this post for yourselves!).  I had been due to take part in the Guildford club's game on Saturday but ended up taking my son off to look at a prospective uni.  One of my friends who was there has shared some photos so I've copied a couple of the here (thanks Anthony!)....

On Monday I did get my opportunity for a bit of Waterloo glory however as Anthony and I played out the battle using Command and Colours Napoleonics.

This had been planned as an extra large game but due to some technicalities with the board we had to go with a cut down version (no Prussians!).  I took the French and for a large part of the game was pretty convinced I was going to lose...every time I advanced I seemed to get shot to pieces but some devastating fire from the British Line infantry and especially from a particularly annoying Dutch-Belgian rifle unit which kept popping out of Papelotte, shooting up my units and the retiring to safety again.  They eventually succumbed to the Young Guard who had to chase them right across the board!

I managed to capture the 3 objectives of La Haie Sainte, Hougoumont and Papelotte but couldn't dent the main line.  Throwing caution to the wind I eventually decided (thanks to a useful set cards in my hand) to throw in several units in a mass attack including the Old Guard and somehow broke through, winning enough flags to win the game.  More satisfyingly I was able to wipe out those annoying Dutch-Belgian buggers!!!


I'm always impressed by game like C&C, Memoir 44 etc which are deceptively simple and games but which are tactically challenging and often give what appears to be a realistic result.
Posted by alastair at 19:32 No comments:

I suspect wargamers around the world are digging out figures and boardgames for the 200th anniversary and staging re fights of some or all of the 100 days campaign.  My local club at Guildford are holding a huge Waterloo game on Saturday over several large tables and using Black Powder rules, which I was due to attend.  Sadly real life has intruded and I'll be off visiting uni's with my son instead...oh well, such are the joys of parenting!

Instead on Monday I ventured over to Eric's Shed for a Black Powder re fight of Quatre Bras.  As usual Eric had arranged an excellent huge game, again using Black Powder.  These are an excellent set of rules for games where not everyone is familiar with the set up...although there are some technicalities to get used to they are pretty intuitive and fast moving.  As many people have also played Warmaster in the past which they borrow heavily from, this adds to the convenience.

There will be a write up with much better piccies over at Eric's Blog in due course so I'll leave the details of the game to him.  There were 6 of us all told, with a 7th for part of the game including other regular visitor Legatus :  in a large game like this it's remarkable how quickly you lose track of what's going on elsewhere on the table and only focus on your sector.  My role was to hold the British flank and try and delay Johns Imperial Guard seizing the crossroads which turned into a bloody stalemate but at least held them off.  Other stuff happened elsewhere in the centre and the right flank but I was a bit distracted by the hordes of infantry facing me and some very bloodthirsty Lancers who made mincemeat of several of my units.  An excellent game fought out to a bloody result.

Now stand back and wait for the wave of Waterloo 200 blog posts!!

I haven't done a great deal of painting lately but had been building up the enthusiasm to pick up on a few dormant projects...especially the Wars of the Roses/Lion Rampant one.  I had a brilliant first game of LR at Eric's Shed on Monday which was a really enjoyable and very close Crusader game.  There is an excellent write up at the Shed Wars blog here. and on my other opponent Legatus' blog here.

I got the rules at Xmas but apart from a quick read through then, haven't really studied them but I found the mechanics really easy to grasp and they make for a quick, fun game which has lots of potential for other periods as well.  Units come in predetermined sizes and roll either 12 dice to hit, or 6 once they reach half strength.  Units also have an armour value which determines how received hits affect them.  As the casualties mount units can become 'battered' and less effective before finally running away.

Each unit needs to roll a determined score to move, attack or shoot...normally a unit failing a roll would mean that play passes to the other side but a house rule at the Shed meant that the active side retained the turn and only that unit couldn't activate.  This seemed to speed things up and make it less 'bitty'.


Eric's write up will give you a feel for the scenario and photos of the fantastic terrain and figures...the game swung either way and really did come down to the wire at the end...great fun!

The 'Ouch' in the title refers the reason I won't be painting for a while.  One of my dogs got in a bundle with another dog a couple of days ago and I made the mistake of instinctively trying to grab his collar... unfortunately the 2 dogs moved their heads and I discovered they both had 'nasty big pointy teeth' just like the Rabbit of Caerbannog!  The end result was 2 nights in hospital as I had a chipped bone and damaged tendon in my thumb and a trip to the vets for my dog...the other dog was unhurt.  To be honest lying in a hospital bed with someone opposite me with their leg in a cage and someone in the bed next to me who had nearly sliced his hand off with a circular saw, I did feel a bit of a wuss!  Even the producers of '24 Hours in A&E' who were filming in the hospital weren't interested in talking to me... 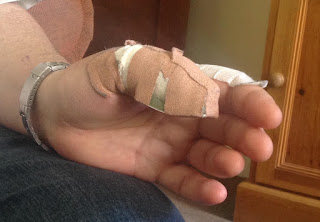 I'm going to have the thumb in a splint for 4-6 weeks so definitely no painting for a while.
Posted by alastair at 23:37 12 comments:

Email ThisBlogThis!Share to TwitterShare to FacebookShare to Pinterest
Labels: Lion Rampant
Newer Posts Older Posts Home
Subscribe to: Posts (Atom)
"At the age of four with paper hats and wooden swords we're all Generals. Only some of us never grow out of it."