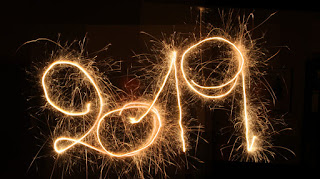 So it's the end of 2019 and the dawn of the Roaring 20's...my son's off at a Hogmanay party with a 1920's fancy dress theme to mark the occasion.  I can't help thinking that the last '20s decade brought us financial collapse and the early stirrings of fascism...oh dear...


It's obligatory to post a recap of the year so here goes with a slightly rambling view of 2019.

The blog continues with 45 posts in 2019 (4 more than in 2018) which surprised me...I didn't think I'd posted as much as that.  Views and followers continue to grow although these are modest compared to lots of blogs out there.  To be fair I've never really chased hits so this doesn't worry me too much and I suspect some of the views are randomly generated by bots but that's fine.   By a huge margin the posts that get the most interest are anything to do with boardgames...these seem to attract a much, much larger number of views for some reason

Many thanks to everyone who continues to pop by and to comment.

Gaming this year has really settled on 3 regular places.   I haven't managed to get to the Guildford club at all this year.  The start times make it a bit of a stressful rush to get there in time to nab a table and get set up.  Instead I am lucky enough to have mix of great friends who host games (including Eric the Shed) and it's great to have a lot of variety in the type of games I get to play.

Games have included a lot of Black Powder at the Shed...despite some flaws it's still (I think) one of the best systems for an evenings gaming: everyone understands the rules, it's easy for newcomers to pick up and games generally come to a sensible conclusion in a reasonable time.

I've also played several games of  Cruel Seas...I got the starter set last xmas and added a few extra boats to the collection. It's an ok system I think...good for a multi-player evenings game but I think for a 2 player game I'd still go with Action Stations by David Manley

I also put together 2 Jacobite period armies from the Peter Dennis Paper Soldier books and these saw quite a bit of action, either using Black Powder or the rules that come with the books.  I'm usually rubbish at seeing a project through to a conclusion so I was pretty chuffed  to have managed to get both the Cruel Seas boats and the Paper Soldiers actually on the table and in action.

In the second half of the year I have been busily painting AWI armies which I think will be used with Rebels and Patriots from Osprey Games.  Again my work rate has been surprisingly high (for me) and it looks like these will see some action in early 2020.

I bought the first of  these back in the summer at the Valhalla show in Surrey/Hants and also bought some Japanese WW2 figures for a Chain of Command project.  These have languished in their box, maturing nicely and hopefully I'll get started on these soon but of course that would distract me from the AWI project!

I've also played a lot of boardgames... some good, some ok and some that really made my brain hurt! I think I've finally realised that my days of playing marathon sessions of games that go on for hours and hours with hundred of counters or tokens to set up (yes GMT games...I'm looking at you!) are over.   I need something that can be fitted into an evening and is relatively easy to pick up.  Without doubt the game I've played most has been Terraforming Mars...and absolutely brilliant game with what seems like an infinite variety of ways to approach the game.  Honourable mentions too for Star Trek Ascendancy, Jaws, Twilight Struggle and Undaunted Normandy which have all seen a lot of play.  I even managed to beat my son at Twilight Struggle for the 1st time!!!

I didn't get to many wargames shows this year...normally I manage to fit in at least 4 shows in and around the South East but this year I only made it to Salute and a brief pop in to Valhalla.  In some cases (like Colours) this was because I was busy but I also couldn't work up the enthusiasm for some of the others.  Perhaps this year I'll be more motivated.

I also found my online patterns have shifted a bit as well.  I spend a lot less time looking at forums such as TMP and Lead Adventure and more checking out blogs and Facebook groups.  TMP in particular is a real shadow of it's former self with a lot less activity than a couple of years ago and the actual content is of little interest (or just annoys me!).  Facebook is increasingly a really good resource for fans of particular games systems to share photos, information and documents.  FB is by no means perfect...there's a lot of rubbish to wade through to find the odd nugget but it does seem to have taken a place as the successor of things like Yahoo groups

So all in all a good years worth of gaming with lots of variety, fun games and good friends...can't complain!  I'll do another post in a few days with ideas  ( I would call them 'plans' but that makes me sound too organised) for 2020.  I hope everyone has a great Hogmanay and I'll see you on the other side
Posted by alastair at 17:52 No comments: 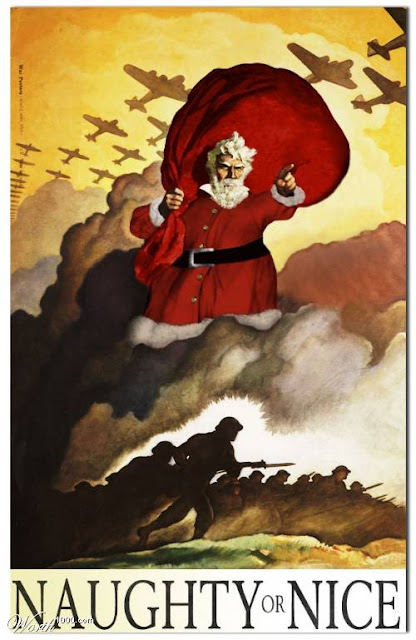 So another year is nearly over and the annual festive blow out is upon us.  As usual I'm spending it back home in Glasgow with the usual family chaos.

I've already seen a few of the obligatory 'review of the year' posts going up on other people's blogs  but mine will have to wait on my return back down South before Hogmanay.

I hope.you have the Xmas you want and it's a relaxing break...and, of course, filled with new toys!


[apologies...the photos in this post are more rubbish than usual...too much glare!]

Oops.... another couple of weeks without a blog post!  If only work wouldn't keep asking me to do stuff life would be so much easier!

First up is Undaunted Normandy from Osprey Games.  I picked up a copy of this a month or 2 ago and hadn't had a chance to give it an outing.  It's a small and quite simple card driven WW2 squad level game set, as the title suggests, in Normandy, and features US and German squads fighting it out in the bocage heavy terrain of Normandy. 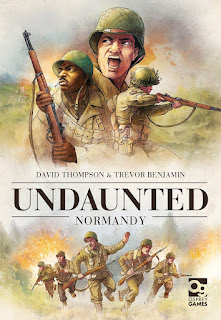 Incidentally Osprey have just announce the next game in the series which is set in North Africa and features the LRDG and adds vehicles to mix. 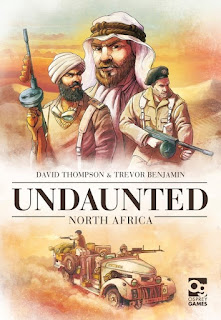 Players hold a deck of cards representing their infantry and scouts as well as squad leaders and a platoon leader.  These don't appear on the board but allow you to reinforce or reactivate your troops .

Each turn players draw 4 cards and play these out.  As well as  allowing you to activate your squads or leaders your hand may also include Fog of War cards.  These don't do anything except take up vital space in your hand and can quickly become very annoying.  Your Scout units are also able to add FoW cards into your opponents hand to slow them down. 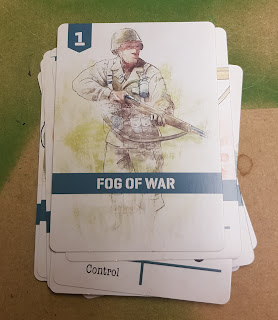 The catch is that infantry teams need to be able to get to objectives to take control of them (and win the game) but they can only move onto tiles which have already been scouted by Scout team, and each time you scout a tile an extra fog of ward card gets added representing increasingly difficult command and control as the battlefield expands... clever... 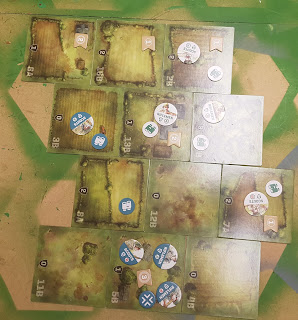 The leader cards let you move cards around between your hand, the discard pile and from your supply cards.  As units take casualties cards get removed from your deck although some of these can be replaced by leaders 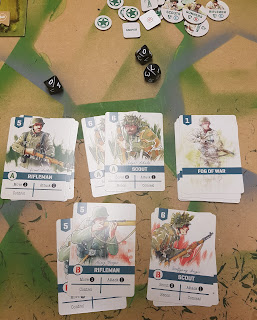 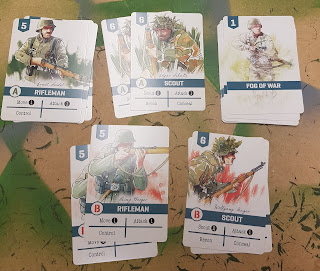 It's a nifty little system... one of those games which is simple but makes a good job of representing squad level combat.  There are 10 scenarios in the book...later ones introduce MGs, mortars and snipers.  Scenarios take about an hour or so to play through and can be linked as a campaign.  We played #1 which is a straightforward, even match between 2 patrols.  We quickly found that getting caught in the open is painful and that Scouts are really vital to open up paths across the battlefield.

A really neat little game which I'd highly recommend.

I also played another game of Lock'n'Load which I thought I had played recently but when I looked through blog posts I discovered it was almost 2 years ago (doesn't time fly!).  My original post is here. 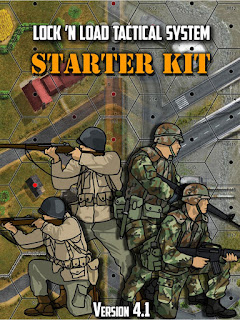 The game is a relatively simple ASL style game but without too many confusing optional rules...at least in the starter set: I suspect as you play additional modules it could become more complex.  The starter set which can bought at a real bargain price of around £13 online, includes scenarios for WW2 and for Vietnam.  As we'd had a go at the WW2 version I was keen to try the Vietnam scenario.  The rules appear to be the same for both games: again I suspect it gets much more varied in the full game. 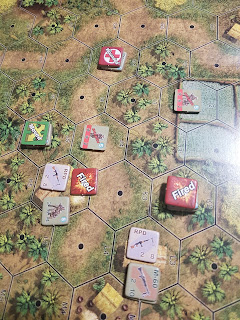 In the scenario a US patrol played by Andrew advanced towards a village defended by a few VC troops.  Of course the Vietnamese had a sneaky ambush ready and the first US troops that advanced into the open where quickly hit with MG and small arms fire and driven back to their entry point. 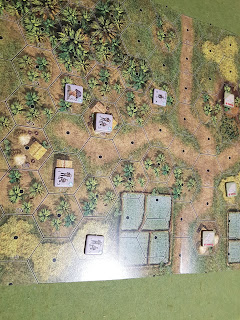 The US forces then took a much more cautious approach although they were under pressure as the scenario has a time limit.  Very unsportingly they called in a couple of artillery strikes which caused a lot of damage and the VC forces were whittled down piece by piece.  I had a pretty powerful VC sniper lurking in the jungle who proved rubbish at actually hitting anything and was eventually wiped out in a US bayonet charge.  On the last turn of the game the last US objective was stubbornly defended by a VC officer manning the remaining MG but a concerted round of fire wiped him out in a heroic last stand and the US were able to liberate the village...I'm not sure there was a lot left to liberate after the artillery fire though! 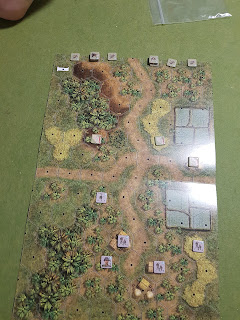 It's a really nice little system which plays out easily in an evening and I'm looking forward to trying out some more advanced scenarios with vehicles and support weapons etc.
Posted by alastair at 15:15 1 comment:

Email ThisBlogThis!Share to TwitterShare to FacebookShare to Pinterest
Labels: Boardgames, Vietnam, WW2
Newer Posts Older Posts Home
Subscribe to: Posts (Atom)
"At the age of four with paper hats and wooden swords we're all Generals. Only some of us never grow out of it."