Well Halloween's been and gone...bring Scottish I get to grumble about how it isn't the same any more.... how we had to make lanterns out of turnips and work hard for our treats (and they were rubbish...a  satsuma and monkey nuts...).  Firework night has just passed as well so I can moan about that too... fireworks going off every night for weeks, frightened dogs etc. God I'm sounding really moany....and don't get me started on Xmas stuff in shops!!!


No posts from me for a couple of weeks, although I did manage a few boardgame sessions thanks to Eric the Shed's hospitality.

In the last few weeks we've played Axis and Allies (fun but made my brain hurt), Star Trek Ascendancy (excellent...played this enough times now to almost know what I'm doing!) and Zombicide (fun and pretty intuitive).


I've started on some more Test of Honour figures and I've been experimenting with different undercoats. Normally I just whack on a coat of Black (or sometimes brown) primer and then work from that.  I've tried using white but it never seems to work very well.

Recently I've read a few articles on 'Zenithal Priming' which sounded interesting.  Essentially this is a fancy term for highlighting at the primer stage.  Undercoat in black and then use a lighter coat (white in this case) to bring up the detail.  Because this is sprayed downwards from above or at a 45° angle it leaves some areas darker and brings out the detail in a way that black primer tends to hide. Hopefully this will make picking out some of the fine detail easier...whether it results in a  better paint job is another matter!! 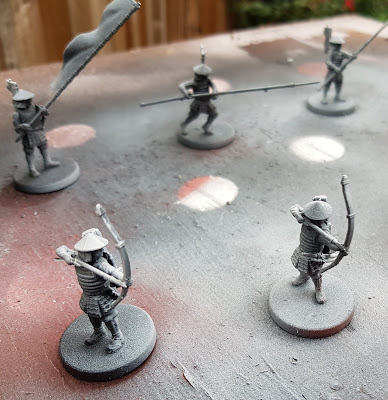 Plans for the dark winter months are underway...mote Test of Honour, Paper Soldiers Jacobites to go with the Government soldiers I did earlier in the summer and finally make a start on my ACW Ironclads.  And of course Xmas is fast approaching so if my well placed hints pay off there should be a nice new Warlord Games Cruel Seas to play with :)
Posted by alastair at 20:51 No comments:

Email ThisBlogThis!Share to TwitterShare to FacebookShare to Pinterest
Labels: Boardgames, painting, Samurai
Newer Posts Older Posts Home
Subscribe to: Posts (Atom)
"At the age of four with paper hats and wooden swords we're all Generals. Only some of us never grow out of it."