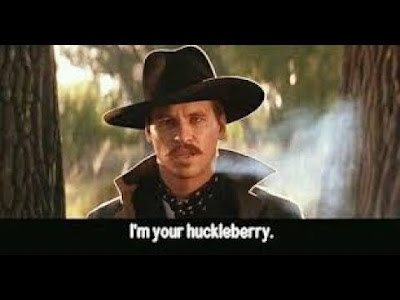 A change of games this week as Andrew and I managed to squeeze in a couple of boardgames in one evening. 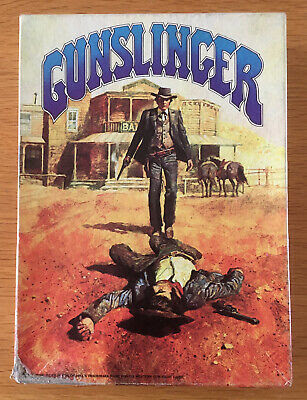 First up was an outing for the old Avalon Hill game 'Gunslinger', one of my favourite games back in the 80s.  My original set was purchased on a family holiday appropriatley in the USA where I remember being amazed at the availability of games in mainstream shops.  My original set vanished at some point (I think when I moved down to England) and I picked up a rather battered set cheaply a few years ago.

Each player manages a number of characters with clichéd Cowboy titles... the Marshall, the Quiet Man, the Sodbuster etc, there's even a floozy for the bar room scenarios!  Each turn is broken into 5 phases and players allocate action cards (move, draw, cock pistol, shoot etc) for each phase (or phases, depending how long the action takes).  A separate card deck determines whether an attack is successful and what the outcome us, so it's a dice free game. 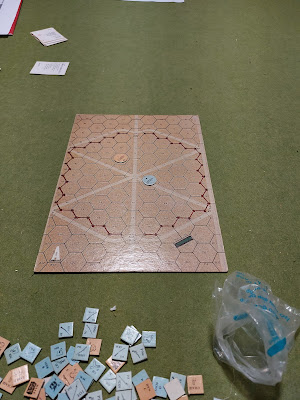 As neither of us had played for a long time we went with the introductory scenario which pitches 2 opponents facing off close to each other in a  empty corral.  The rulebook claimed this was based on a historical encounter between Doc Holliday and Johnny Ringo although checking afterwards it looks like in reality Ringo shot himself in a drunken fit of depression so not quite the encounter of legend.

In our first run through we blazed away at close range, generally failing to hit each other despite taking the time to aim properly until a lucky shot from my character Ringo hit Doc Holliday in the leg and left him bleeding in the dust (like the pesky varmint he was, etc...).  Holliday is limited by having fewer endurance points thanks to his nasty case of TB.

We replayed the scenario and this time I decided to go for a more cinematic approach ignoring aiming and blasted away fanfiring the gun like they do in all the best movies... again Andrew was very unlucky with the result card and Doc went down with a shot to the body

We both had great fun with the game... inevitably we ended up making suitable gun noises and spouting cowboy clichés which is all part of the fun.  Definitely one to try again with a more complex scenario soon.  I've always reckoned it would also be an easy game to play using miniatures instead of counters.  I've always found Gunslinger gives a really good narrative game that feels.like a movie. 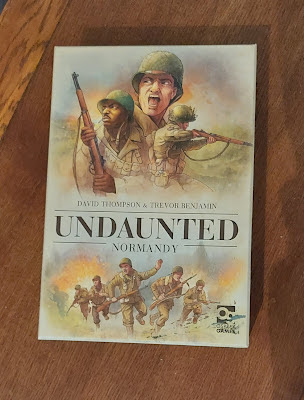 We finished off the evening with a quick run through of Undaunted Normandy as Andrew hadn't played it before.  I've played this a few times but never got beyond the introductory scenario! 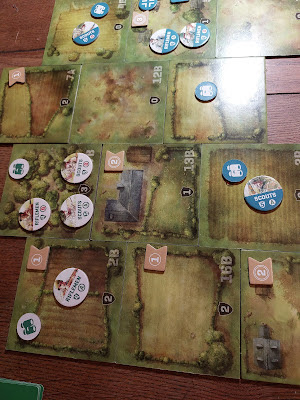 It's easy to pick up and, despite me failing to add some important cards to the deck until part way though, we rattled though the game with Andrew's Americans winning comfortably (although we missed this for a turn or so because we hadn't counted the VPs properly!).  A nice combination of a simple game but one that you need to think carefully about tactics in.