War of the Ring and giant cats 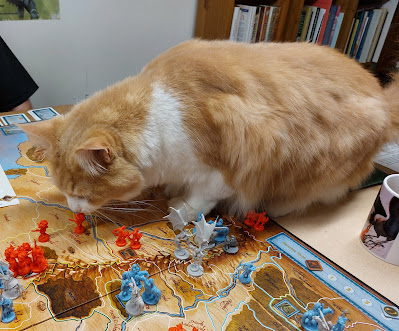 One of the problems with many boardgames is that they take ages to play.  When I was younger I would happily spend most of a day and evening playing games... Starfleet Battles used to take up most of a Saturday punctuated by a Pizza Supper and beer.  But these days life has a habit if getting in the way and I struggle to manage more than 2 or 3 hours in an evening.  Sometimes I can leave a game set up on the dining room table for a few days but that isn't always possible.  So a game like War of the Ring is a bit of challenge to squeeze in, especially as I was playing at my friend Anthony's house. 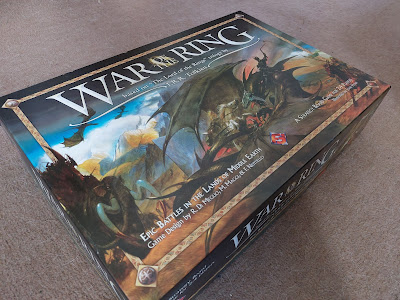 We've been trying to fit this game in for what feels like months but for various reasons it kept getting cancelled.  Anthony was keen to give it a try so we arranged an early start and, accepting we probably wouldn't  finish, had a go at saving Middle Earth from evil Sauron/evil Hobbits depending on your point of view. 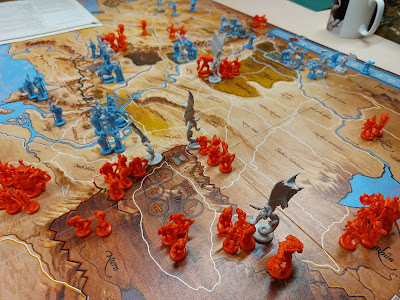 Every time I've played WOTR I've been the Fellowship so it made a change to be marshaling Sauron's forces and hunting for the Ring.  Anthony pushed the Fellowship hard, moving them every turn and sometimes more than once which should have made it easier for me to spot them and start corrupting innocent little Frodo.  I repeatedly failed to spot them or to cause any corruption, and when I did Anthony ruthlessly sacrificed Fellowship members to soak up the damage... poor old Pippin was the first to go, followed by Legolas and Gandalf!  All this speedy movement meant the Frodo and Sam had made it all the way to Mordor relatively unscathed.

While all this was going on the armies of Mordor and Harad were stomping all over Gondor and another army had emerged from Moria along with a Balrog and attacked Lorien, putting me tantalisingly close to a military victory.  Sadly we had to stop there with both sides close to a win and the game on a knife edge. 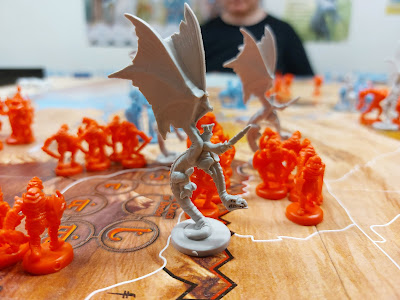 It's  game that definitely rewards replaying as you begin to see different options and tactics.

As you can see the forces of Mordor were backed up by Leonard the Morgul-Cat who tried to help by attempting to eat Elrond and batting dice and counters off of the table.  Afterwards this set me off down a wormhole of 'cats in Tolkien'.  There are definitely dogs in the books... Farmer Maggot's dogs for example or Huan the Wolfhound from the Silmarillion (I've always thought that would make a good name for a pet dog but I think it would be rejected for being too nerdy) but I couldn't remember any mention of cats.  Turns out they are mentioned in passing eg part of one of Bilbo's riddles, in the song Frodo sings at the Prancing Pony etc.  But the main reference is in The Book of Lost Tales and the Tale of Tenuviel where Tevildo the Prince of Cats appears, described as a "demonic servant of Melko'... not at all like Leonard then!  And there's Queen Beruthiel and her team of spying cats in Gondor.   Incidentally the Quenya for cat is 'Meoi'... you never know when that will come in handy.

It seems Tolkien wasn't a cat-person.  When he was asked by a cat breeder if they could use names from Lord of the Rings for her cats his reply to his publisher was pretty clear...

"I fear that to me Siamese cats belong to the fauna of Mordor, but you need not tell the cat breeder that."