Another week and another bit of retro-gaming (does 1991 count as retro?  I mean it's only...oh god...30 years ago!).  This time is an adaption of the Games Workshop space combat game Space Fleet.

I've never really played any of the GW games apart from Lord of the Rings and Legends of the High Seas so this was a new one for me.

I used to be a fan of Starfleet Battles but found it overwhelmingly fiddly and clunky when I tried playing it a couple.of years ago...this is a much simpler space combat game with a limited range of manoeuvres and options for shields etc all displayed on the ship cards.  Weapons are also very simplified with ships having forward firing guns that are better at long ranges and side firing ones which are better close up, so getting in a good position to get the drop on a facing with weakened shields is key.  There's no faffing about with repairs or changing shields although I gather more rules and variations between factions in the GW universe were introduced in expansions 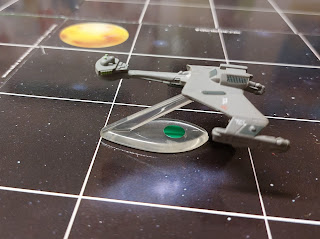 Our game took a Star Trek slant instead of 40K with 2 Federation Cruisers facing off against 2 Klingon D7s.  Moves are pre-plotted and there's an art in second guessing where your opponent is going to move to which neither of were very good at! 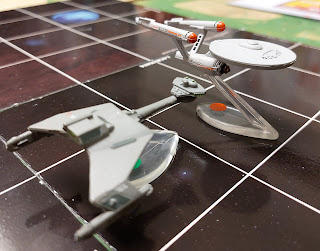 One of my D7s was quickly battered and destroyed but I did manage to take out a Cruiser before my remaining ship, now full of holes and without shields was finished off by the evil Federation.  Nice and simple and ideal for a quick game... I can see it would be easy to add in some extra flavour and options without over-complicating things.