"The early bird gets the worm, but the second mouse gets the cheese."

I picked up a couple of boardgame bargains this week via eBay and Boardgamegeek...both were games that have been on my 'want' list for quite a while.  One was Western Legends which I haven't played yet but we managed a family boardgame night  with the other one this evening... Wingspan.

I've always been keen on birdwatching...when I was young I used to regularly go on trips with the RSPB and while I've always enjoyed spotting birds, but I got a but more into birdwatching when I started working from home a few years ago... my desk looks out on the garden and some bird feeders and it's been a welcome distraction from work!  So Wingspan sounded really interesting...

The game came out in 2019 and is an engine-building game.  The aim is to build an collection of birds, gaining points for specific objectives, having the highest scoring birds, eggs, cached food etc. 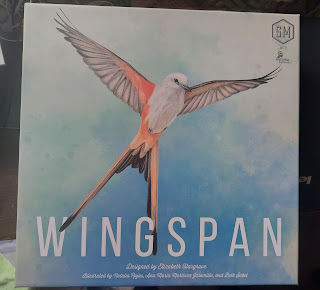 It's a lovely looking game with really nice components including 170 bird cards.  In the main game these are mainly North American birds but there are some that are also found in Europe.  There are expansions for specifically European or Australasian birds. 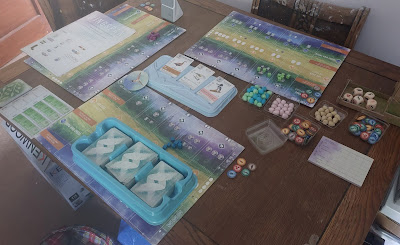 It's a relatively simple game and reminded me a lot of a less complex version of Terraforming Mars.  Each turn you only have 4 actions to think about... playing a bird, gathering food (which you'll need to play a bird), collecting eggs (again, you need these to add birds) or adding a card to your hand.
Of course there's a bit more to it than that...as you activate habitats to gather food etc, the birds you've played activate and some have additional 'powers'.  So for example a Peregrine can try and catch smaller birds (which will ad VPs) or some birds will store food away which again adds to the VP count at the end of the game.  Like Terraforming Mars careful playing of the right cards can build up a powerful sequence of actions, gathering more resources or racking up the VPs.
I'm not usually a fan of dice towers but who could resist one that looks like a birdhouse... 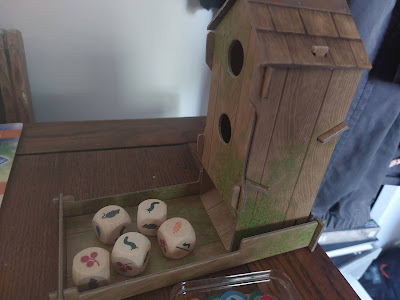 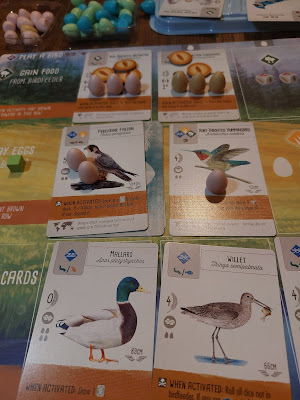 A lovely game... not too complicated and playable in 40-70 minutes (both increasingly important these days I find) and really good fun.

Oh, and as usual in our family boardgame evenings I was soundly beaten by everyone else!!