Last night we took to the high seas on board a U Boat courtesy of the excellent boardgame U Boot and hosted by Eric the Shed.

This game casts up to 4 players as the crew of a U Boat on a mission in the North Atlantic, cooperating to keep the boat sailing smoothly and attempting to safely patrol and sink enemy ships as well as some side missions that the game throws your way.

The players take the parts of the Captain, 1st Officer, Navigator and Chief Engineer and everything else is directed by an app, running on a phone or tablet.  Perhaps because I'm Scottish the role of Chief Engineer appealed to me...or it could be that I was too chicken to take on the responsibility of captaining the ship or navigating us safely!  My dad would have been so proud... I finally made it as a ship's engineer!! :)

The app is a really smart piece of software, determining the weather, maintenance tasks, incoming messages (which of course have to be decoded via Enigma) and of course, enemy ships.  You can use the app to detect enemy shipping via the periscope or the hydrophones and it's great fun spinning round in your chair looking through the virtual periscope or having to sit hushed in case the microphone picks up your voices and alerts the patrolling enemy ships.

At it's heart the game is really about resource management... you need to have the right crew in the right places to keep everything running and of course things begin to go wrong very quickly.  We'd only just set sail when the toilets needed repairing... luckily my skilled engineers were able to unblock the loo and avert a disaster!

Similarly mundane tasks like routine maintenance and prepping meals for the crew need to be done but of course as soon as enemy shipping is spotted it all goes out the window.

Crew are manouevered around a lovely 3d U Boat model... 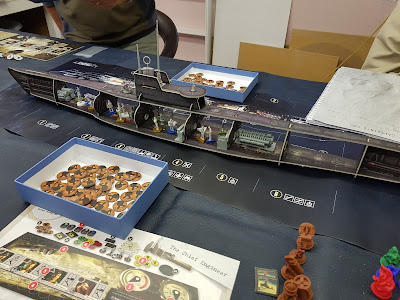 And each player has 2 shifts of crew who very quickly run out of capacity to complete their orders if you aren't careful.  The Captain has the overall responsibility of giving orders and has to manage these carefully or the crew's morale plummets.  He is equipped with chocolate, beer and inspiring speeches to try and keep everyone cheery but inevitably crew morale slowly (or quickly) sinks. 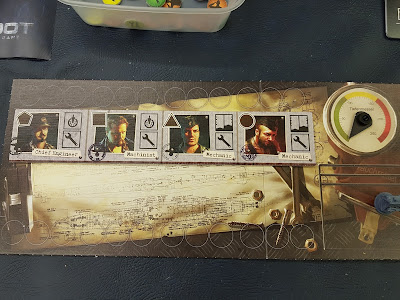 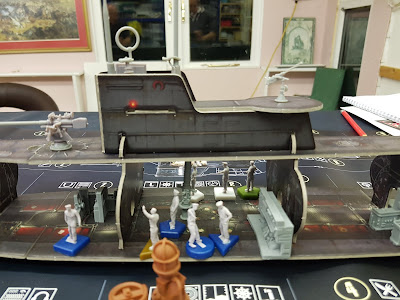 In our mission we somehow managed to get in a great position on an enemy convoy, sinking a freighter and escaping the resulting depth charge attack by escorts.  We were then spotted by another destroyer which again depth charged us... this time more seriously causing gas poisoning, a fire and several leaks which resulted in several crew being badly injured.  More worryingly my Chief Engineer sprained a finger!  Of course my plucky engineering crew were able to deal  with all the repairs with ruthless efficiency!

We managed to slip away from the destroyer by diving deep although we did find ourselves steering a bit too close to Norway at 150m deep at one point.  We slipped past yet another destroyer, or possibly the same one before coming across another convoy and attempting a last attack.  We struggled to load and fire our remaining torpedoes as a destroyer escort bore down on us and before we could set them off we were rammed and sunk.

The app plays out in real time but you have the option to speed up time when all is hopefully quiet or to pause the action while you think what to do next.  When the action breaks out it does all become really frantic and there was a real tension as we tried to slip past the enemy escorts and heard the depth charges being launched.

The three and half hours we played flew by and the game is really immersive. I know app-based games aren't to everyone's taste but it's really worth trying if you get a chance.