Earlier in the week we were able to try out Gaslands with 4 players on a larger table, with some excellent terrain supplied by Eric the Shed.
We used the 'Death Race' scenario which is pretty much as you'd expect... a race around a circuit.   We laid it out as a figure of eight to ensure maximum opportunity for crashes although as usual most of the chaos happened as soon as we reached the 1st bend!
In order to save a bit of time we'd pre-made a selection of cars and trucks and randomly gave each player 2 vehicles.  This does take away from part of the fun of the game which is designing your own car and picking weapons etc but it did save a lot of time. 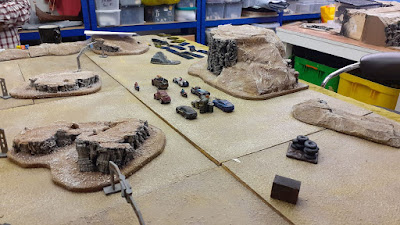 On the start line...

We decided to award each player a point for wrecking an opponents vehicle, and 2 points for completing a lap.  In our practice game we found there wasn't an incentive to complete laps when you could just concentrate on detroying the opposition... this way there was an option for players who wanted to race rather than fight.  In the event awarding points per complete lap was a bit optimistic as only one vehicle actually made it all the way round by the end of the evening 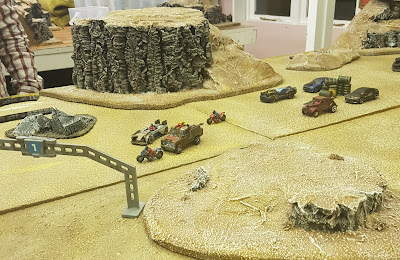 And they're off....
We played on a 6' x 4' table with some large rocky cliffs at the corners and plenty of rocks and crates etc scattered around.
2 players had a motorbike each and these sensibly accelerated away to get away from the heavier pack of cars and trucks.  The 2 bikes fought a high speed duel all the way round... fighting it out with pistols and machine guns at breakneck speeds.  Somehow they both managed to just avoid wiping out although it was a close call. 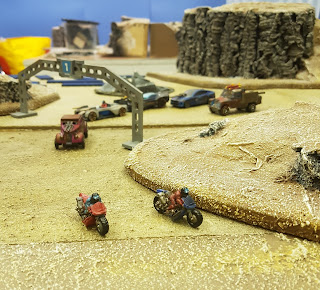 The bikes speed off ahead of the pack
One of the bikes used his smoke dispensers very effectively to screen his bike from enemy shooting and to annoyingly block part of Gate #2.  The 2nd bike then added some dropped Caltrops into the gate making it extremely hazardous.  By the end of the game one of my cars would end up wrecked in the gate as well! 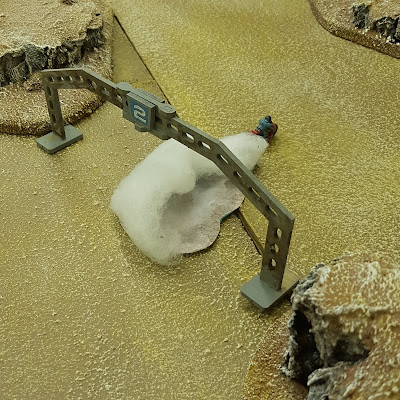 On the first bend after Gate #1 it all went wrong.  I managed to spin into some rocks and was then rammed.  My sporty Performance Car never managed to get out of gear #2... potentially you can get up to gear 5 or 6 although this can make manouvering pretty tricky as the bikes found out.  Both my cars were pretty beaten up after being rammed, crashing and being shot and were then finished off when Callum's truck unloaded his flamethrower onto both of them, giving him 2 points. 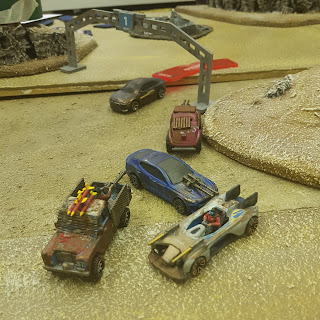 Meanwhile up at Gate #4 Eric the Shed's motorbike had pulled ahead of rival Mark's and crossed the line at the gate tying the scores for a draw, with Mark's bike in close pursuit.
The game worked really well... within a couple of turns everyone had grasped the movement rules (including not picking up a movement template unless you were going to use it) and how to use the Skid Dice to accelerate and manouevre and hopefully everyone enjoyed the game.
With hindsight there are a couple of things I'd do differently.  Everyone had 2 cars or bikes to begin with but actually just having one would have been better and would have sped up play.  Players could then re-start with a new car if their first one was wrecked.  We also ruled that weapons didn't arm until cars had passed gate #2... otherwise it would have been carnage on the start line.  Because of the chaos on the first bend we then allowed everyone to arm up after gate 1 as we were never going to make it as far as gate #2!!  Ideally using an online spreadsheet car builder to let people build there own cars in advance would be fun but as onnly a couple of us had played I think using the pre-made cars was best in this case.
Great fun and suitable chaotic... Thanks to Eric the Shed for hosting and supplying the brilliant terrain!
Posted by alastair at 16:30

Email ThisBlogThis!Share to TwitterShare to FacebookShare to Pinterest
Labels: Gaslands