Wargamers are notoriously fickle creatures... we read a book or watch a film and think "ooh... I've always wanted to game the War of the Lower Anhalt-Silesian Succession (or something)"

Then we start the new project and then find the figures languishing, unloved, in a box months, or years, after we first pick up glue and brush.  And that's what I'm guilty of (yet again).  Last summer, back in those heady virus-free days when wargames shows were a thing, I went along to Valhalla, a local show near Farnborough (the original post can be found HERE) and bought a couple of boxes of figures.  One of these was the start of my AWI armies which were quickly painted and then added to and have had several  actual games on the table.  The other box was a set of Warlord games WW2 Japanese: my thinking was to build these up for Chain of Command, along with some Australians or Chindits to oppose them.  I've always fancied doing this as a project. 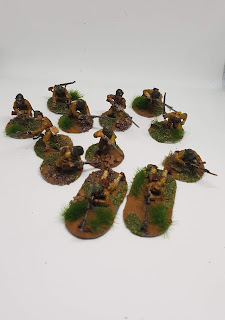 Since I 'finished' my Wars of the Roses army (for now anyway) and have tinkered with some Gaslands cars I keep thinking I ought to go back to them and finish them off...the're all assembled but only 12 have been painted.  But somehow I just can't work up any enthusiasm at all for finishing them.  This morning I realised that I'm probably never going to complete this.  I think there are 2 main reasons.  One is that they would need a lot of terrain that I don't have... jungle pieces, buildings etc.  I do have a few bits of jungle terrain for Vietnam games but this is in 15mm rather than 28mm and to be honest is very badly in need of repair or replacement as it's very old and tatty.
The other realisation is that it's going to be a pretty expensive project to complete.  Although Chain of Command works at platoon level I'd still need a couple of boxes to get the core platoon built.  The bigger issue is adding all the interesting stuff that you need as support elements... by the time you've added enough options you need a fair amount of troops and vehicles to add on.  And that's before I get started on the Aussies!
So in a mad rush of blood to the head the decision is made...  off to eBay with them!  I've been mulling over whether to paint up the rest of the unit first and then sell them but I think they may go as they are.
Strangely I feel  quite relieved having made the decision which makes me think it's the right thing to do. Of course it does mean I never got to scratch that Far East WW2 itch (which sounds like some unpleasant medical condition contracted out in the Tropics!) but I may come back to it in 15mm, which is the scale all my other WW2 stuff is in.
The good news is that with the prospect of selling them off, the cash will kickstart a new project (will I never learn!!!).  More on this later...