Earlier this week we got to try out the new rules from Andy Callan, Never Mind the Billhooks.  Blogs have been fairly buzzing with interest about these so I was keen to see how they played out.  There is an excellent write up of the game at Eric the Shed's blog
We had a 4 player game of 100 points each.  Interestingly no one had picked any cavalry and these remain untested although they do look a bit brittle (realistically I think).
The rules played very well.  We only had a couple of queries afterwards which were answered very quickly on the really active Facebook page by Andy Callan.  The rules themselves have a rather 'old school' feel but without too many modifiers etc to keep track of.  There is a definite hint of Donald Featherstone rules with a touch of Sharp Practice.  Some tokens are needed to record use of arrows (archers have a limited amount), which units are Disarrayed or Daunted and it's also important to be able to track which units have activated or not as, at the end of each round there are a couple of options for units which haven't been ordered earlier in the turn.  This does mean there is a certain amount of tokens etc on the table which I know not everyone likes, but this didn't detract at all from the game.  Leaders are activated by cards and then have a number of orders including activating units under their command, rallying or moving.  There are also bonus cards and special events which can crop up throughout the game.
Eric the Shed had made up some lovely decks of cards for all the leaders (including some personalised ones for each player... you must now call me the Earl of Rutherglen!!) as well as unit cards and all the bonus cards etc.
We randomly allocated sides and began to deploy on the fairly open table... apart from a few hedges and some woods on either flank the table was relatively obstacle free.  Each side had a gun which has a risk of exploding and, sure enough, both guns blew up as soon as they tried to fire!  Clearly a sign that these new-fangled devices will never catch on!
One of the rule requirements is that 50% of your force must be Billmen or Archers and I added some more Bills as well as some mercenary Handgunners and a company of Scots Spearmen. 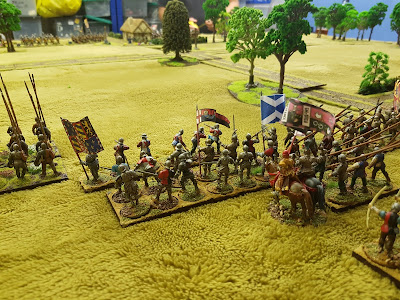 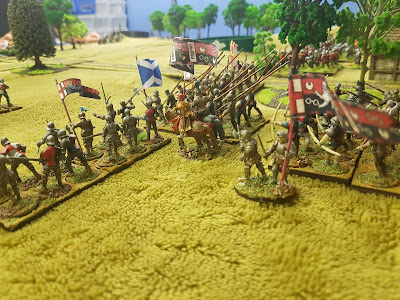 On my right my Ally Mark was making excellent progress with his skirmishing Handgunners proving very effective and his opponents Archers and Billmen began to waver.  I was faced with a larger number of Archers who sat back and waited for me to advance into range where they could unleash their arrow-storm 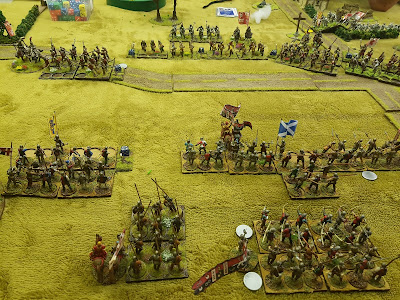 One of my commands, led by Lord Percy spent most of the game wandering around in the rear as I messed up my deployment and couldn't get them into the right spot for most of the game.  My Handgunners were also proving very effective and made good use of the woods but, due to their small size, were eventually worn down by arrow fire and routed. 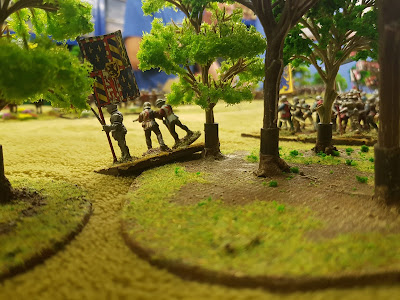 I dithered and couldn't decide whether or not to commit to an attack and risk the bowfire.  A block of Billmen with Archers supporting them in the rear tried a charge but were driven back  by enemy Bills after being weakened by shooting from the enemy archers.  I decided, too late, to go for it and charged my heavily armoured Men at Arms forward, hoping they'd be able to weather the arrow storm... but no they couldn't!  They took heavy casualties advancing and their attack was doomed to failure 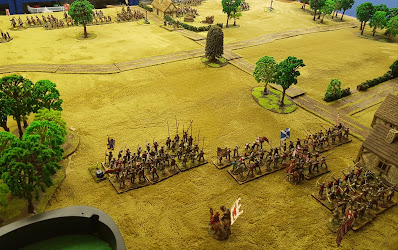 Over on the right a Special Event card led to Mark's Men at Arms unit switching sides at a crucial moment (very Wars of the Roses!) and charging into the rear of their former comrades.  At that point we decided the game was well and truly lost!
I think we all agreed these are a really great set of rules and I'm sure they'll be getting a lot of use over the next few months.
Posted by alastair at 22:46

Email ThisBlogThis!Share to TwitterShare to FacebookShare to Pinterest
Labels: Wars of the Roses

"At the age of four with paper hats and wooden swords we're all Generals. Only some of us never grow out of it."

The Worlds War: Forgotten Soldiers of Empire
by David Olusoga

Kate Rusby - Hand Me Down