After playing the Milton Bradley game ' Dogfight' a few weeks ago, it was time for another large scale retro-gaming night courtesy of Anthony.  This time we played Screaming Eagles, another 80s boardgame from Milton Bradley.  The BoardGameGeek page for the game can be found here

Players have 2 Jets each and take alternate turns shooting and moving (or vice versa).  Each player has 9 movement cards with the option to roll 1,2 or 4 movement dice and to break right or left or to move straight ahead.  Planes always face the same direction but when you exit the map edge you loop round reappear on the opposite rear edge of the unusual lozenge shaped board.  This can make predicting where your opponent is going to be quite tricky, especially if, like me, you easily confuse left and right and which plane is which! 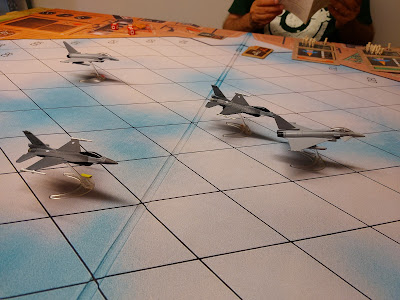 We've moved on from Biplanes now to Jets... the game came out in 1987 so probably owes a lot to films like Top Gun or Iron Eagle

Each plane has a handy card with pegs to indicate damage and ammo. 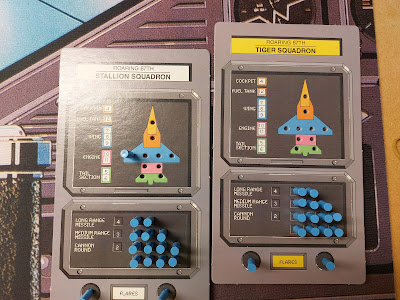 Planes can either launch missiles or use their cannons but ammo is limited so some careful choices are required about what to use when.  Each plane also has a couple of flares which reduce the chances of a missile hitting.

A lot depends on the dice throws, both for movement and damage but it is one of those games which appears very simple, but then a turn or so into the game you start to realise there is a bit of thinking required 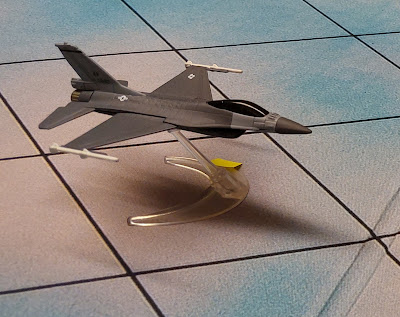 As before we played on a large sized mat Anthony had had made for the game.  We were also playing with some nice die-cast planes rather than the plastic ones that came with the game.  There's definitely a charm in these family wargames...ideal for some light gaming but just enough thinking required.