The Men Who Would be Kings - Defending the Drift


Bit of a different game this week...I'd left the choice of game to Anthony and he came up with an excellent choice which I hadn't played for ages... The Men Who Would Be Kings.

Anthony has an excellent collection of 54mm figures and for this game his Zulus and British took to the table in one of the scenarios from the rule book.  The Zulus were trying to prevent the British from capturing a vital river crossing into their territory and with a 12 turn limit the pressure was on the Brits to make haste. 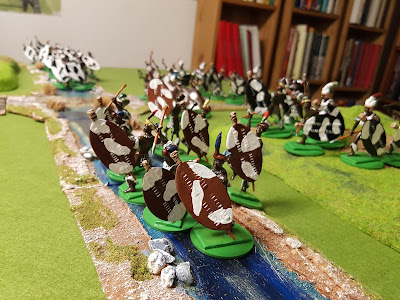 As the Zulus I ought to have been playing a defensive game and letting the clock run down against the British but that didn't feel like a very Zulu sort of thing to do so I pushed forward over the river, sending my Veteran troops up into the hills  by the river where they 'Went to Ground' which meant they could only be fired on at close range, hopefully negating the British firing advantage.

On the other side of the table I couldn't resist the temptation of trying to wipe out the NNC who had taken the other hill on the table...I thought these would be easy pickings but they fought well and had the advantage of the high ground and although the fight was a draw, this forced my Zulu regiment back 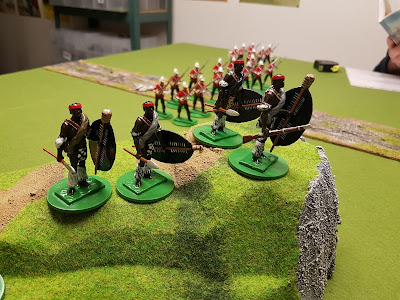 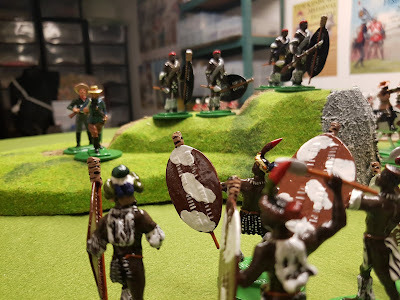 Before I could launch another attack the British Mounted Infantry charged in support of the NNC.  This turned into a very bloody skirmish with the Zulus regiment being wiped out and the Mounted Infantry then being attacked and finished off by a 2nd regiment to level the scores at 1 unit apiece. 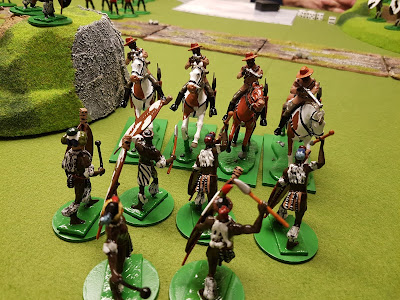 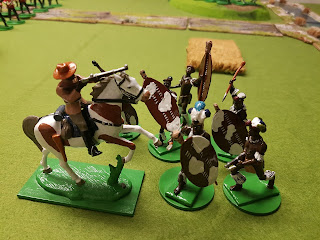 The surviving Zulus from this fight quickly pulled back over the river where the rest of the Zulus had formed a defensive line. The British had been advancing rather cautiously and Anthony had realised that the clock was ticking 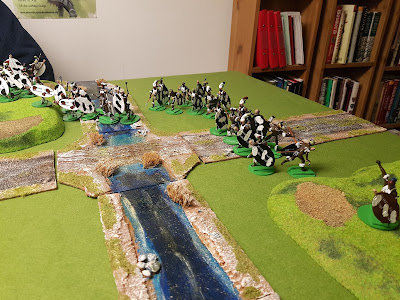 I had to really resist the urge the launch my veteran Zulus from the hills onto the advancing British regiments...I knew it would end badly but it seems the right thing to do when you're playing the Zulus!

As the turn limit was reached a brave unit of Redcoats charged the Zulus defending the ford but were driven back with heavy casualties on both sides. In the last turn however the plucky NNC who had finally decided to come down from their hill charged in driving back the rather beaten up Zulus and seizing the crossing. I had one last chance to launch a counter attack and save the day but my regiments all decided that they didn't want to advance...they'd seen what happened to their comrades at the hands of the NNC and the game went to the British (...just ). 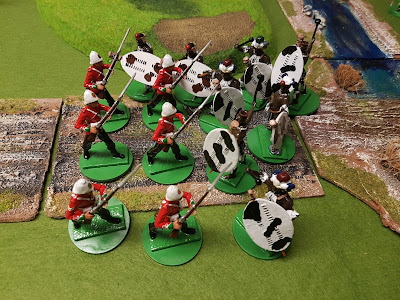 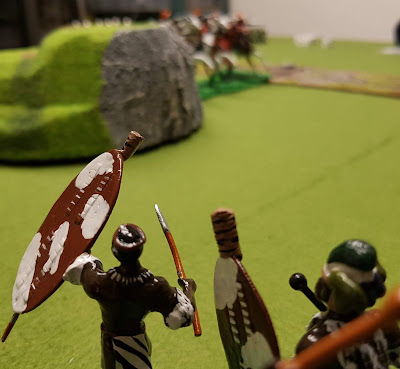 We played this using half-strength units as the figures were 54mm which can make combat and firing rather bloody and units quite brittle, but afterwards were thinking that we could have counted each figure as 2 which would counter this.  We'll have to have a re-match to test it out.
Posted by alastair at 22:59

Email ThisBlogThis!Share to TwitterShare to FacebookShare to Pinterest
Labels: 54mm, Colonial, The Men Who Would Be Kings