I had another chance to play a game of Wilderness Empires this week...scarily I realised it's almost 2 years since this last had an outing.  My last post on it is here and contains a summary of how the game actually works.  Essentially it's a strategic game of the battles for North America pitting the British and their Iroquois allies against the French and a mix of local tribes.

I'd bought the game on a trip back home to Glasgow (at the excellent Static Games).  In fact I'd spotted it on sale in the shop, convinced myself that I didn't need/couldn't afford it, and then immediately kicked myself for not buying itas soon as I got back home!  Luckily I engineered an excuse to go back into Glasgow a couple of days later and it was still there....never pass up an obvious bargain!!! 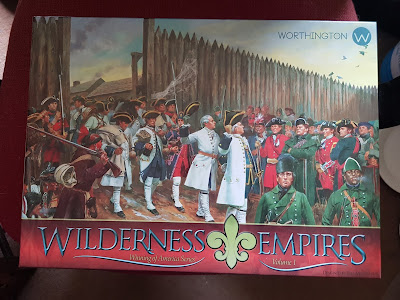 In the game movement is restricted to preset routes and regular infantry are pretty slow unless they have a decent Commander to lead them.  Militia and Native Americans can move faster

The combat dice give 3 results...a hit, a miss and a 'Refuse to Fight'.  When this is rolled a Militia or Native American unit withdraws from the fight.  So if your force is composed of irregulars this can be pretty devastating, even if they do come skulking back rather shame-facedly at the end of the fight.

Both sides can also use event cards which can affect combat results but even more usefully can bring in Regular troops and Commanders as reinforcements (as long as you have access to a port).   These Regulars can be in short supply so need to be used carefully 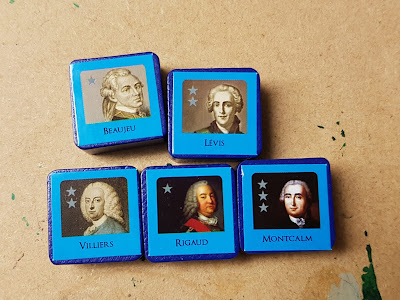 In our game we fought a series of skirmishes over forts in the interior with both sides capturing them and then being driven back.  As the French I found it really hard to get out of my home territory and to take the offensive.  Anthony as the British was driving me back onto Quebec and Montreal but the downside of this was that each winter (the game is played in seasons) the Iroquois and French Native Americans all go home and there is a risk that some of your militia may also head home if they are too far from their farms and villages.  They can move back into combat in the Spring but it does mean you need to think carefully about the timing of your campaigns.

We ended up manoeuvring around each other for several turns fighting minor skirmishes before fighting a couple of large battles around Fort Carillon and Fort Frontenac which left both sides badly depleted.  Although each side still had a core force of regulars the attrition was affecting the French more and I don't think there was any way I'd have been able to do more than postpone the inevitable fall of Quebec.

Given that the rules are only 8 pages ling this is a surprisingly challenging game that makes you think about timing and manoeuvre in launching your campaigns
Posted by alastair at 23:18