A few months ago my son told me to make sure I had booked off Friday 5th July but wouldn't tell me why.., I think it was payback for years of taking him on mystery days out when he was little.  He used to enjoy these but the mystery element drove him up the wall (which of course as cruel parents we thoroughly enjoyed!).  A few days before the 5th he announced that I would need an overnight bag and then on the 4th he told me I'd need my passport and to be up ridiculously early next day.

So on the 5th we were up at 4am for an early morning drive round the M25 to Heathrow airport (thanks to my wife for getting up at an unearthly hour to drive us).  I still wasn't sure where we were off to but was guessing somewhere touristy like Paris or Rome... on check-in I discovered we were booked on the Hamburg flight.  I've never been to Germany (although I've always wanted to go) but knew nothing about Hamburg, apart from the famous red-light district and I didn't think a father and son tour of the Reeperbahn was something either of us would want to do! :)

After a short flight into Hamburg we hopped on the train into the city centre...I was still in the dark as to why we were there but was a bit more relaxed now I at least knew where I was going.  We wandered around town for a bit.  My son had been reading up and apparently the Hafenstadt area is worth visiting...lots of new architecture and redevelopment.  I think we missed this bit completely but did find some empty wastegrounds!  We then wandered back through the historic Warehouse district (now a UNESCO world heritage site) which was much more impressive, before going down to the harbour area for some lunch...currywurst of course! 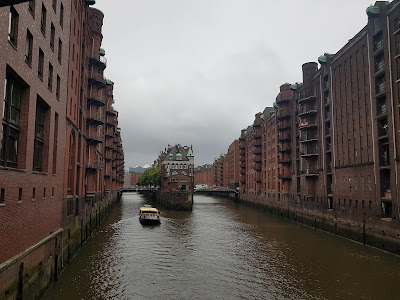 After lunch we hopped on the U Bahn to our accommodation a few stops away in the Altona district.  My son had booked an AirBnB flat which appeared to be owned by a cabaret and opera singer... could anything be more German? Very nice but very kitsch!  He then finally decided to tell me why we'd come to Hamburg and produced 2 tickets to see Bob Dylan in concert that evening!  I've always been a huge Dylan fan but never seen him live... as my son is also a fan he'd decided to treat us both.  A bit of a lump in the throat and 'oh dear...I've got something in my eye moment'!

We then headed back into town to kill  the rest of the afternoon.  Back at the harbour district there are lots of harbour boat trips as well as regular ferries (more on these later).   There were also a couple of tourist attractions moored in the harbour.  The first of these is the Museumschiff Cap San Diego.  This is a 1961 merchant ship, the of six ships known as the white swans of the South Atlantic which traded to and from South America.  I guess this is very like the ships my dad sailed on in the late 50s and 60s.  You can go on a tour of the ship (we didn't)  and even stay on board. 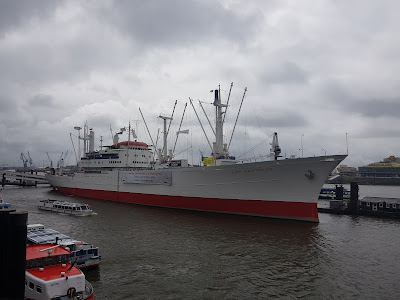 Moored nearby is the Rickmer Rickmers, a 3 masted barque built in 1896 in Bremershaven.  The ship traded initially to and from Hong Kong and then between Hamburg and Chile.  During WW1 it was captured by the Portugese in the Azores and then loaned to Britain where it was renamed the Flores. 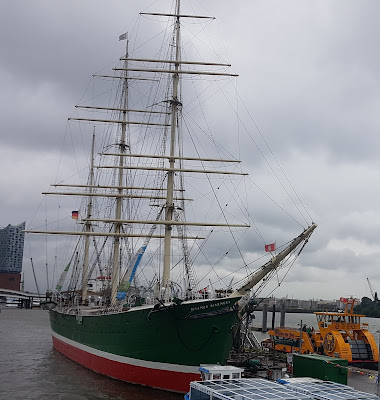 After the war it was returned to Portugal where it became a training ship, winning the Tall Ships race in 1958.  It eventually returned to Germany in 1983 and is now a tourist attraction...again we didn't have time to explore it as we were both much more interested in the next exhibit in the harbour... a Tango class submarine... 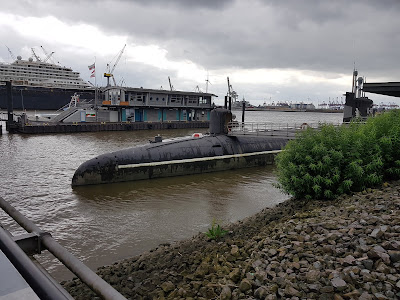 Confusingly although it is advertised as a U-Bootmuseum this isn't a German boat but is actually Soviet submarine B-515 (despite saying U434 on the conning tower).  U 434 (or B 515) was built in Nizhny Novgorod in 1976 and served in the Soviet Northern Fleet. 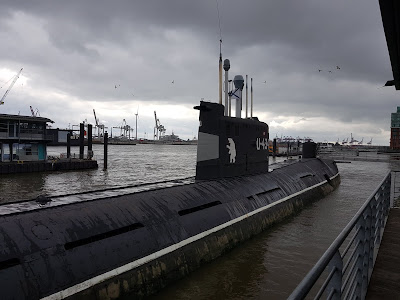 The boat could dive to a depth of 400m and had a max surface speed of 13kn and could make 16kn when submerged. 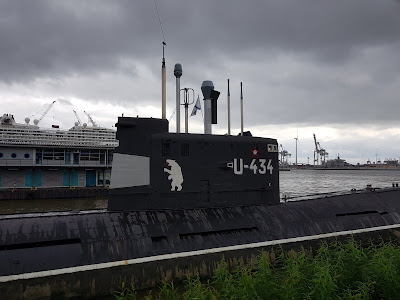 One of the 24 torpedoes carried onboard... 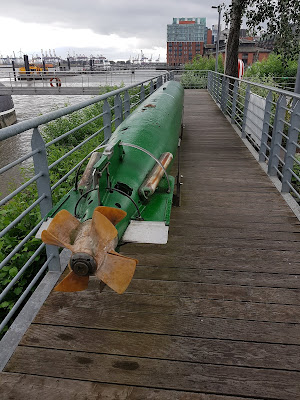 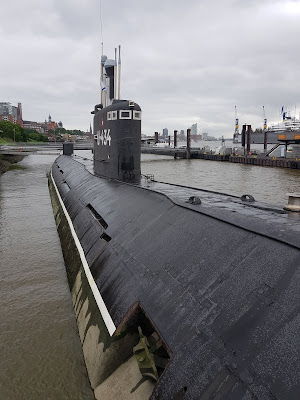 In the ridiculously cramped interior they somehow squeezed in a crew of 78 sailors!  It remained in service until 2002 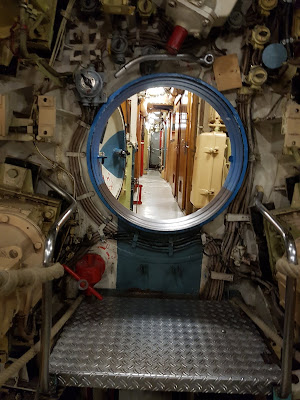 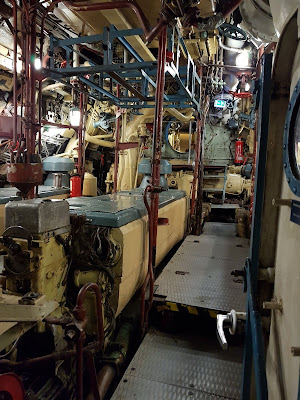 After a rather claustrophobic tour of the submarine we made our way back into town for dinner before heading out to the town's Barclaycard Arena.  Travelling around town was ridiculously easy...everything was really well connected and signed and worked really smoothly.

And so to his Bob-ness.  It's always a bit of a gamble with Bob Dylan.  His voice is very variable (which a friend reckoned meant it was either terrible or really terrible!), he is quite likely to play a set of obscure album tracks that you've never heard of and the tunes may not match what you were expecting to hear.  Or... he can sing really well (for Bob Dylan) and play lots of hits with a great band.  We got the good version of Bob Dylan.... yes his voice is an acquired taste but he ran through a 2 hour set of really great songs (including lots of the bigger songs you'd hope to hear).  Some of the tunes had been rearranged a bit to accommodate his changing voice (he's now 78!) and he played piano rather than guitar for most of the set, I suspect so he could sit down.  I was absolutely blown away and when he played a brilliant version of Simple Twist of Fate I have to confess there was a tear in my eye...

This isn't from the Hamburg concert but a couple of days earlier at the Roskilde festival...

We'd done a lot of walking on the 1st day (around 12 miles) and I was beginning to feel it!  We had leisurely breakfast of coffee and pastries in the city centre (well, we were in Germany) while we tried to work out what to do with the rest of the day before we had to head back to the airport.  Hamburg isn't an obviously touristy city: I imagine it's a bit like coming to the UK and visiting Liverpool or Belfast or Glasgow but there are number or attractions that we considered.   Miniatur Wunderland is a huge model railway exhibit and there is a large maritime museum which we considered, especially as the weather was a bit drizzly but in the end we decided to go on a harbour boat trip. 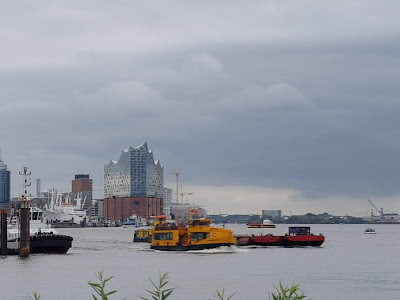 This took us around the Warehouse district which we'd seen the previous day from the street level but it was interesting to see it from the canal and hear about the trading history of the city.  We then headed out into the main harbour and passed several humongous cargo ships and a massive cruise ship.  We also passed a few German navy ships:

This is A50 Alster, an intelligence ship currently in dry dock.  She is a Type 423 Oste class reconnaissance ship commissioned in 1989 and designed to keep an eye on those pesky Soviets. 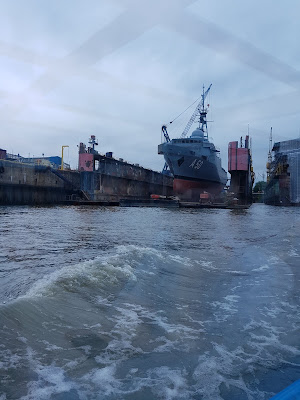 Further round the harbour we saw 2 German Frigates, F224 Sachsen-Anhalt and F225 Rheinland-Pfalz.  These are relatively new ships launched in 2016 and 2017 and are Baden-Wurttemburg class frigates which are still at the fitting out stage.  There seem to have been lots of issues with the design of this class which are still being worked out.As Post-Cold War ships these are focused more on land-attack capabilities and on peace-keeping roles 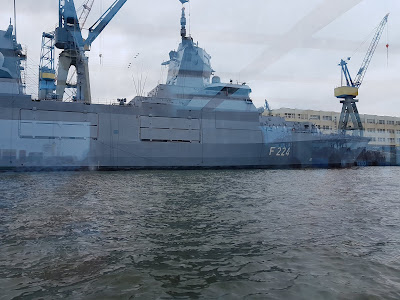 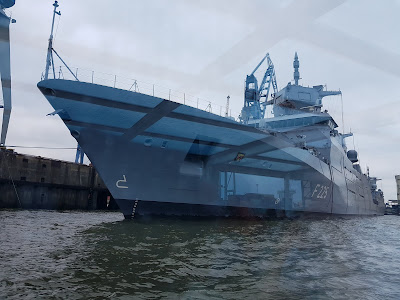 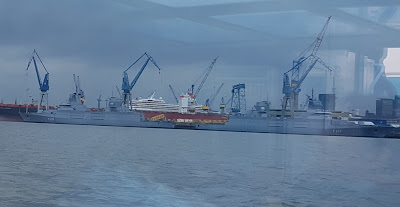 The harbour tour was much more interesting than either of us expected and we arrived back in time to grab some more Currywurst and then head out to the airport and back home.

An absolutely brilliant couple of days...I was so touched and overwhelmed by my son's generosity and his sneakiness in keeping it all so secret (turns out practically everyone knew about it apart from me!).  I'm very, very lucky!
Posted by alastair at 22:25

Email ThisBlogThis!Share to TwitterShare to FacebookShare to Pinterest
Labels: Naval