A trio of boardgames: old and new

My son's back from uni for a couple of weeks which usually  leads to a flurry of boardgaming.  Last weekend we managed to get through 3 boardgames in three days.  My wife isn't a fan but will grudgingly go along with some games, usually ones that aren't too wargamey.  An exception to this is Kingmaker.  This has become a bit of a family tradition although I think we all recognise that the game isn't without it's flaws. So game no. 1 was a 3-handed game of Kingmaker... 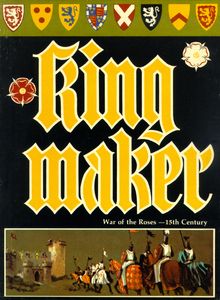 My history with Kingmaker goes back to my own days at uni (many years ago!) when we would play games that stretched over several days (apparently there were these things called lectures that we were meant to go to...who knew!).  These marathons were large swirling multiplayer affairs with constantly changing alliances and factions, punctuated by the odd bit of back-stabbing (and beer).

Back to the present....for the first time we tried using all the advanced rules including the advanced combat system...normally in KH you simply total all the troops on each side and calculate the odds.  In the advanced game nobles are matched against each other and fights become more individual.  In the end we decided this really didn't add much except making things more drawn out and went back to normal version. 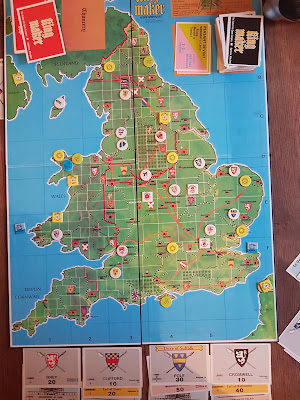 The problem that always crops up with KM is that it can easily turn into a stalemate: I had a senior Yorkist heir to the throne stashed safely in Ireland (and as I held the Lieutenant of Ireland office this meant he was fairly safe).  My son had the King but lost him when he was summoned to the coast to meet an Embassy from overseas and he was ambushed by a pile of my wife's Nobles.  She immediately ferried the king over to Calais (where she had the Captain of Calais office) which meant he would be impossible to capture.

(note...this is typical of my wife's tactics in boardgames.  She repeatedly claims she doesn't really know what she is doing and then deals a killer blow that ties up the game completely!) 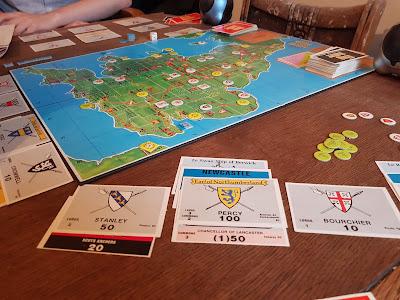 We decided at this point that, short of something bizarre happening or one of us suffering a rush of blood to the head, the game was going to be unwinnable.  It's a great game (even if it feels a bit dated) but really needs a minimum of 4 or 5 players I think.  I'm not sure we'll be revisiting it for a while.

Next on our vintage games list was a game of Gunslinger: this is an old (1980s) game from Avalon Hill and another one that I remember fondly. 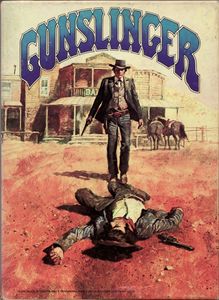 Compared with more modern rulesets for tabletop cowboy gunfights these rules are very detailed with a turn representing 2 seconds (which is then broken down into 0.4 second segments!!).  The game comes with a stock of western archetypal characters...the Kid, the Marshal, the Prospector etc, each of whom has bonuses, or penalties to shoot as well as some extra skills.  There are also character types for Native Americans, Mexicans, townsfolk etc...there's even a Floozy!  The 26 scenarios cover lots of actual or fictional gunfights and the modular terrain boards can represent town buildings, ranches, wilderness etc.

There are up to 7 characters per game with each one having a deck of cards which are used to build actions over the 2 second turn...so for example you might Advance, Draw & Cock your gun and Shoot.  Each action has a time factor which determines when in the turn it happens and the use of the action deck means you are limited in how many of each action you can undertake.  Hits from a gun (or a punch...brawling is always an option) can cause wounds but more typically cause 'delay points' which then stop or slow down your actions.  Interestingly there aren't any dice in the game... all wounds (or gun misfires) are determined by drawing a card from a Results Deck and cross-referencing Aim Time and Range. 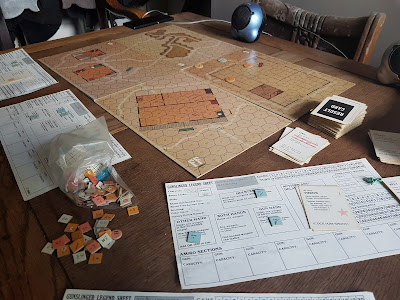 I remember this game very fondly...my mate David and I used to play this a lot in the early 80s but it has lain untouched since then.  I convinced my son to give it a run out...partly for nostalgia value but also because at the back of my mind I keep thinking this could make a good tabletop game with miniatures with a minimal amount of tinkering.

We played an ambush scenario (which with hindsight wasn't the best one to choose from) in which my 2 characters (Virgil & Morgan Earp) were bushwhacked by friends of the Clantons some time after the events at the OK Corral.  This meant that the baddies had the drop on me from turn 1 and my son took full advantage of this! 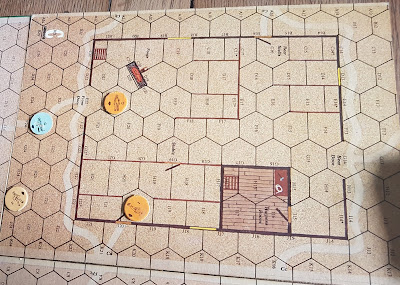 I don't think I managed to get more than 1 shot off before both characters were badly wounded.  My son then enjoyed himself by seeing how many different ways he could wound me before I died.... in the end 1 character was shot, stabbed and given a severe kicking before finally expiring.  It wasn't like this in the movies!

I thought the rules worked well (my son less so) but it took a while for us to get our heads round the card options.  By the end of the game we were moving much faster (or at least  my son was...I was mainly lying in a bloody heap trying to get rid of delay points!).   I think it has potential if you fancy a very detailed gun fight but if I was running a larger multiplayer game I'd definitely look elsewhere...probably to something like 'A Fistful of Lead'.

The final game in our trilogy is very much the youngster, having only just arrived via Kickstarter.  This is Crusader Kings, based on the computer game of the same name.  My friend Eric the Shed has just acquired this and a group of us gathered to give it an initial play.  Each player (up to 5) takes on the king of a European royal family... loosely based around Spain, England, France, Italy and Germany depending on the scenario.  The aim is to build your dynasty over several turns, acquiring wives and then heirs before your king snuffs it and ensuring the survival and rise to power of your dynasty.  Each noble you acquire has different positive and negative traits which affect the success (or not) of your actions.  These range from being Wise, Kind, Chaste to negatives such as Slothful, Idiotic or Lustful although negatives can be helpful in some cases and vice versa (eg being Lustful is quite handy when you're trying to acquire a wife or husband!)

Each player can try to subvert and take over nearby territories, build castles or plot and scheme against your opponents.  A nice feature is that when you play a card which benefits your faction it is usually combined with an event which benefits the player to your left so some careful thought is needed about what to do, and when. 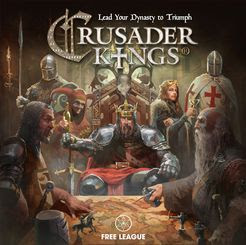 Despite the initial complexity of the rules we actually sped up rapidly as the evening went on and things seemed pretty intuitive.  We really need to give it a longer run through but the initial verdict was very positive: the game has lots of depth and a really entertaining storytelling aspect as your nobles rise and fall.  We are planning a 2nd game next week. 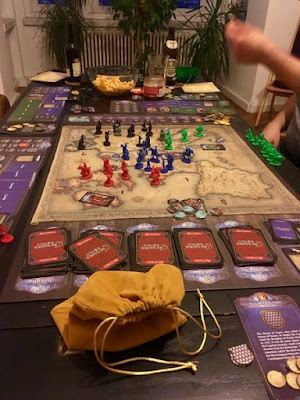 (Crusader kings images from Boardgamegeek)
Posted by alastair at 16:25