I've had a busy day off today... we're having some unseasonal sunshine so the day has been filled with dog walking and chores.  Now the windows are cleaned, pot of soup made and bags of clothes have been sorted for the charity shop I can hopefully find some time for a spot of painting.

Recently I've been very focused on painting boats for Cruel Seas and making more Paper Jacobites, so it was a slightly odd feeling when I finished all of these and realised I didn't have anything immediate to work on.  Of course I quickly remembered that I had a starter set of 1:200 scale planes for Warlord Games Blood Red Skies which have been languishing in their box for a few months so these have been dug out and I've started painting again. 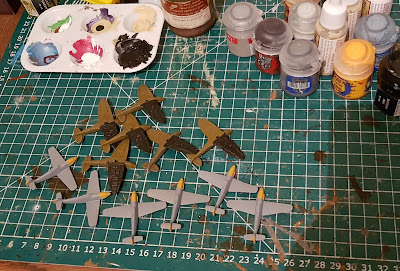 The starter set comes with 6 Spitfires and 6 Me109s.  I already have quite a few planes in 1:300 and I had thought they would match up ok but having compared the models I don't think this will work and I can see myself investing in more of the larger planes.

Disappointingly the starter.set came with some rather naff stickers rather than decals.  I think this may have been changed in later sets but I'll have to order some better decals.

I've also been giving some thought to Salute purchases.  I'm on a spending limit and don't have any great plans but I do plan to pick up some minis for Burrows and Badgers.  I first came across this a couple of years ago at Salute 2017 where I had a chat with Michael Lovejoy at Oathsworn Miniatures.  They produce the game and a great range of figures. 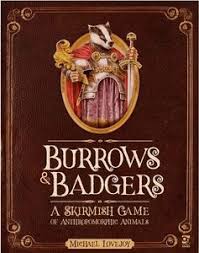 It's clearly heavily inspired by things like Redwall and Mouseguard and may be a bit twee for some, but the range of fantasy mice, squirrels, badgers and other woodland animals is really well sculpted and the game has intrigues me.  I've resisted until recently when I decided, sod it, I fancy the game!    I've also just seen an ad for this  new range from Northumbrian Tin Soldier which looks excellent.  I've picked up a copy of the Burrows and Badgers rulebook which looks like a decent set of fantasy skirmish rules.... kind of like Frostgrave with bushy tails.The rules are published by Osprey and are very pretty to look at.

Beyond that I have no plans for Salute spending (yeah...we've heard that before!!!)


I played in an excellent game at Eric the Shed's on Monday...a refight of the Zulu Wars battle of Khambula, almost on the anniversary of the battle.    There's a great write up on Eric's blog here.  It was a great game...not least because we managed (just) to not get overrun by the hordes of angry Zulus.

Oh, and I managed to get myself temporarily banned from TMP for a few days for calling an idiot ' a bit of a dick'...ho hum.I   should know better than to get into arguments with right-wing idiots on the internet but I couldn't help biting. :)   The whole moderation/banning thing on TMP is really quite strange and arbitrary  The site itself seems to be a pale shadow of what it was a few years ago and certainly less useful that other sites such as Lead Adventure Forum.
Posted by alastair at 20:34