My xmas present from my wife this year was a copy of Twilight Struggle, the strategic Cold War game from GMT Games.  To be fair it wasn't a surprise as I'd emailed her assorted links to Amazon etc but I still looked surprised on Xmas day.


My present to her also wasn't a surprise...she wanted a hat and although I'd considered trying to measure her head surreptitiously to ensure the surprise,  I decided that trying to sneak up on her wielding a  tape measure when she was asleep would end up in a trip to casualty so the safer option was to let her pick the hat!

Back to Twilight Struggle...

I'm guessing quite a few people are already familiar with it...it's been around for a few years now and won a shed load of prizes over the years.  It's also constantly rated as the number 1 game on BoardGameGeek.


It's a 2 player game, pitting the US against the USSR over the course of the Cold War and has a suggested playing time of 3 hours.  The players take turns playing cards which either give them a number of points to gain influence in other countries or to trigger an specific event.  Rather neatly if you play a card to gain influence points but the event on the card would benefit the opposing player then it is triggered aiding your opponent.  This causes much frustration throughout the game and you spend a lot of time trying to balance the benefit of gaining influence with the pain of providing your opponent with a nice bonus

The cards are divided into early, mid and late war and match historical events from the period.  In the Early war period the focus is on Europe, the Middle East and Asia but as the game progresses South & Central America and Africa also become battlegrounds.  Players can also us cards to take part in the Space Race which is time consuming but provides some handy victory points and bonuses if you are successful. 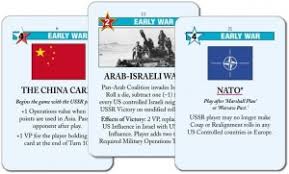 Players also have to commit to a certain amount of military activity...no one wins the war by being peaceful I guess.  This takes the form of attempting coups in certain countries or playing War cards (eg the Arab-Israeli war etc) but this also causes the Defcon level to rise and the player who moves it to Defcon 1 loses the game!

It's a deceptively simple game but one that benefits replaying as you need to understand the scoring system...scoring occurs when either player plays a specific regional scoring card (eg Scoring in Europe) and the impact of various cards.  My son and I have had a couple of attempts at it.  In the first game neither of us really understood what we were doing and it showed...I spent a lot of time and effort building influence in South America before noticing that this doesn't have an impact till the Mid and Late game.  My son meanwhile was rampaging through Asia picking up Victory Points!

For the first run through we only played about 3 turns but we then managed  a complete game.  This stayed finely poised till around turn 6 (of 10) when I took my eye off the ball and allowed him to shoot ahead in Victory Points...I think I got distracted by S America and Africa again!  We also spent a whole turn battling over SE Asia; I'd made it pretty obvious I was going to play a Scoring card for this region and since Poker was never my strong point so he saw through my attempts at deception straight away!)   In the end I only managed to gain 1VP out of a whole  turn of furious coups and building influence but we both wasted a lot of time and cards...I guess that pretty much sums up Foreign Policy in SE Asia in the 60s though!  By turn 9 he'd  won the space race and achieved the VP target and the game was over.

The game is a lot of fun...think Risk but with the option to deploy Lone Gunmen, Death Squads and Fidel Castro.  There's  a huge amount of depth to it which would certainly reward repeated playing but it was actually pretty simple to pick up the basics.  Highly recommended!
Posted by alastair at 00:06