Waaaay back in October last year I received the Conan game from Monolith games which was part of a Kickstarter that was funded in Feb 15, was due to arrive in October 15 and eventually arrived on the back of a lorry a year overdue.  To be fair the delay was mainly due to the huge amount of extra bits and pieces that the producers introduced during the Kickstarter campaign which netted them a staggering $3,327,757.


I blogged about the game itself here, back in October.

Since then I've painted a few of the figures...the game came with a huge amount of miniatures including a number of major  heroes and villains from the books as well as assorted Picts, pirates, guards and monsters to fight against (including an impressive giant snake and a hideous tentacled thing...with extra tentacles thrown in for free!).  I think it's safe to say I won't be needing any fantasy figures for a while!  I hadn't actually managed to play a game though (I'd hoped to have a go over xmas but we got distracted by Twilight Struggle)

Last night I finally managed to actually play the game and tried out the 2 player scenario provided in the main box.  The games have up to 4 heroes pitted against all the baddies who are controlled by the Overlord.  In this scenario Conan is on his own racing around an inn trying to find the correct priest (out of a group of 5) who will lift a curse, while fending off a growing number of Bossonian Guards and Thak,  a giant man-ape, all of whom have decided to stop off at the pub while on a lunch break.

The game mechanics are nicely managed...each player has a character sheet on which he/she places a number of gems.  These are then allocated to actions such as movement, attacks, re-rolls etc.  A sensible player also hangs on to a few gems to aid defence when it's the Overlord's turn to attack.  The drawback is that you only get a limited number of gems back each turn and they are lost permanently when a hero is wounded so careful planning is necessary.

The Overlord has a similar set up using an arrangement called 'The Book of Skelos'...I can't help thinking that should be written in capitals and accompanied by a roll of thunder... 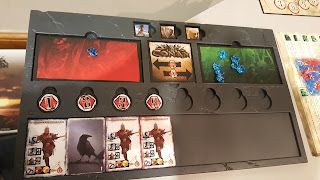 The Book of Skelos is a plastic tray that is set up for each scenario.  Units are shown in the bottom row: the cost to activate a unit increases from left to right but once a unit has acted it is moved to the right hand side and everything slides along to the left.  This means you can, in theory, keep reactivating a unit but the costs will be very high and you'll run out of gems.  The tile with the Raven on it is an event tile which is scenario dependent.  In our first game the result of activating it varied depending how many priests Conan had interrogated (or killed...it amounted to much the same thing!)...either bringing in more guards, giving some a bonus move or unleashing Thak!

The mechanics worked well and were all pretty straightforward.  There has been some criticism of the 2 rulebooks  and I'd agree they could be better laid out but a good read-through and watching some of the helpful playthroughs on YouTube made it all pretty clear. 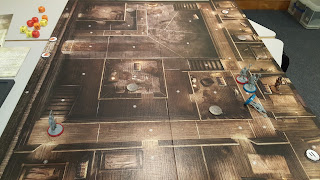 In our game Mike, playing as Conan quickly checked out one of the priests and killed a guard before getting a bit bogged down in slugging it out with a growing number of Bossonian Guards.  It seemed quite difficult to kill the guards and I need to check that I haven't missed something but they had a knack of fending off Conan's attacks.  This did come at a price though as I had few gems left after defending to actually do much but nevertheless Conan was slowly whittled down, losing gems/health as the game progressed.  Mike tried raiding a couple of chests in the hope of finding a handy health potion but only came across Explosive Orbs which, while they were entertaining, weren't what he needed.


With hindsight Mike should have concentrated on working through the Priests as killing guards didn't gain him anything and the Priests held the only way of winning.  Towards the end of the scenario Thak was activated and headed off Conan who had finally identified the correct Priest, lifted the curse and was about to make his escape...sadly a massive punch from Thak did 8 hits which Conan wasn't able to stop and he died on the steps of the Inn.

The gem allocation system is pretty neat and forces the player to carefully look after their dwindling supply of gems.  As this was a single-hero scenario we didn't get a feel for how it would play with multiple players but I suspect this would add a lot as players don't take individual turns to act but can coordinate and switch between actions.  It would be good to try this next time.